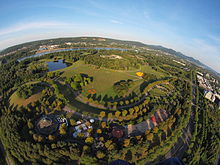 Aerial view from the west

The Rheinaue amusement park , known by locals as “the Rheinaue”, is a 160  hectare park-like recreational area in Bonn . The main features of the park were created on the occasion of the Federal Horticultural Show in 1979 south of Bonn's Gronau , a then undeveloped and agriculturally used wetland area.

The Rheinaue lies roughly in the middle of the Bonn urban area on both sides of the Rhine. The part on the left bank of the Rhine (Bonn side) with an area of ​​125 ha belongs to the districts of Gronau and Hochkreuz and thus to the federal district . In the north and east it is bounded by the Rhine, in the northwest by the former buildings of the German Bundestag , in the west and southwest by Franz-Josef-Strauss-Allee or Petra-Kelly-Allee and Ludwig-Erhard-Allee and in the southeast by Plittersdorf district . It is crossed by the Konrad-Adenauer-Brücke , where the Annaberger Bach flows into the Rhine. The part on the right bank of the Rhine ( Beueler side) is smaller (35 ha) and also extends on both sides of the bridge, north to the mill stump, south to the Bonner Bogen .

Originally there was an alluvial forest on the Rhine between the Bonn district of Gronau and the Bad Godesberg district of Plittersdorf , which was greatly reduced by the straightening and intensive navigation of the river. The Rhine promenade was expanded to the Rhine floodplain area in Gronau in the 19th century. In 1901 a Bismarck tower and a town hall called the “beer church” were built there . The alluvial forest later gave way completely to agricultural use.

After Bonn had become the provisional federal capital in 1949 , the government district was built on the northern edge of the Rheinaue, and a settlement for US diplomats ( HICOG settlement Plittersdorf ) on the southern edge . In 1953 and finally in 1962 the town hall in the north of the Rheinaue was demolished. At the end of the 1960s, the partial expansion of Gronau and Hochkreuz began as a government district: Bad Godesberg was incorporated and the previous temporary arrangements were to be replaced by more spacious new buildings. Since the Rheinaue represented the largest undeveloped area in the heart of the grown Bonn and also bordered some existing government buildings, the construction of a large, representative government district here, which would have spatially concentrated all federal ministries, offered itself here. Some of these plans have been implemented.

In order to save the remaining green areas as a local recreation area, the city of Bonn applied for the Federal Garden Show 1979. It was awarded the contract and left the existing Rhine meadows and adjacent agricultural areas after an architectural competition was carried out in 1970 by the landscape architects Gottfried Hansjakob (* 1937) and Heinrich Raderschall - as the first and second prize winners of the competition - create a 160 hectare, hilly landscape park. Houses and bridges were built in collaboration with the Bonn architects Ernst van Dorp and Klaus Schmidt; Gottfried Hansjakob took over the implementation planning alone. The redesign of the park took costs of around 80 million DM (not including the costs for the garden show), of which 34 million euros were financed by funds from the urban development measure for the parliamentary and government district . The park was largely planted between 1974 and 1976. 45 km of footpaths and cycle paths, several lakes and playgrounds have been created. Between the opening day, April 27th and October 21st, around 7.6 million horticultural show visitors came to Bonn. In the south of Gronau, the park could not be completed in the 1970s. Only after the construction of the Post Tower and Schürmann building and the dismantling of some office containers on Charles-de-Gaulle-Straße did the Rheinaue get its northern end in 2007/08, again according to Hansjakob's plans. During the construction of the caesar research center in 2001–03, part of the Rheinaue was built on for the first time since the amusement park was completed - albeit on the outskirts - the landscape integration of the building was in the hands of Gottfried Hansjakob.

On June 10, 1982, one of the largest German peace demonstrations took place on the right bank of the Rheinaue in Bonn . The landscape park was included in the Route of Garden Art between the Rhine and the Maas in 2004 because of its exemplary importance . Starting in August 2017, a tent city with exhibition and event areas was built on an approximately 35,000 m² part of the Rheinauenpark for the UN climate conference in Bonn 2017 ; the subsequent restoration of the lawns was completed in spring 2018. In December 2017 it was announced that the Cologne district government had placed it under monument protection as a monument on the basis of an agreement with the city of Bonn . The entry in the list of monuments of the city of Bonn took place on December 21, 2017.

Plants, buildings and works of art

Blind fountain in the blind garden

Explanation board of the blind fountain

Nutria - rose from the Rheinauensee

In the north there is the Bismarck Tower , in the center the Japanese Garden and an open-air stage, in the south there are sports fields and the sewage treatment plant for the adjoining district of Bad Godesberg , which has to meet the highest requirements for the avoidance of odor and noise emissions, is surrounded by trees (picture below ). The Rheinaue is also home to various works of art (e.g. , öffelwald (1979) by Hermann Goepfert / Johannes Peter Hölzinger ). A totem pole (1979) by artist Tony Hunt donated to the City of Canada is considered the park's landmark. The totem pole was renovated by the artist in 1989 on the occasion of the 2000 year celebration of the city of Bonn; In July 2017 it was dismantled to re-evaluate the need for renovation. After the urgently needed, extensive restoration with partial reconstruction, it was put back in its old place between the Japanese Garden and the Post Tower in October 2018.

Not far from the totem pole, in a south-easterly direction, is the blind garden , which offers the flora of the park for the blind and visually impaired . B. through large raised beds with strongly scented plants, should make them understandable and tangible. A representation of the blind garden as a relief and information in Braille provide further explanations, e.g. B. to the plant names. In the middle of the blind garden stands the bronze fountain for the blind - a metaphor for the truth. It shows an elephant and several blind people who touch the animal on different parts of its body and thus come to different conclusions. An information board in Braille and normal script explains the background of the presentation. The fountain was created in 1983 by the artist Richard Engels from Wolfsburg. Founder was Dr. Wolfgang Hesse , city director in Bonn from 1964 to 1975.

Finally, the Beethoven monument by Peter Breuer should also be mentioned . In 1995 the semicolon stele of the artist group of the same name was erected.

In the Rheinaue on the left bank of the Rhine is the Rheinaue baseball stadium used by Bundesliga club Bonn Capitals , which was built for the 2001 European Baseball Championship .

Dead eels and water birds from the Rheinauensee 2018 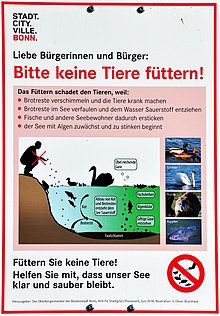 Information board at the Rheinauensee

In the amusement park there is a 15-hectare man-made lake. At a length of 1.3  km and a width of 155 meters, it has a capacity of around 150,000  m 3 of water. The lake can be crossed on six pontoon bridges; one island is laid out as an inaccessible bird sanctuary . The Rheinauensee provides habitat for various species of fish and geese birds , including since the 1990s, the other for the stock waterfowl not unproblematic Egyptian Geese . In addition, Nutrias have settled here since the mid-2010s . These semi- aquatic (in water and on land) rodents with their striking orange teeth have even become a small attraction in the Rheinaue. They resemble a beaver and are also called beaver rat , but they have round and not flattened tails like the beaver.

The lake has no natural inlet or outlet. He receives fresh water from pumps from the city of Bonn and, since 2011, from supply lines from the cooling system of the air conditioning in the nearby Post Tower .

Favored by the shallow water depth (0.5 to three meters), the lack of running water , an increased production of organic deposits and other factors, there is a significant reduction in the oxygen content in longer, sunny periods, which leads to the death of some of the fish. The formation of sapropel at the bottom of the lake can be accompanied by the development of toxins such as botulinum toxin , which can cause the death of water birds. The feeding of the animals by visitors to the park and the resulting strong reproduction also pollute the lake with the excrement of the large bird population. Despite clear information on information boards, the request not to feed the animals is repeatedly disregarded. All of these factors combined can cause the lake to tip over. In the summer of 2018, around 400 dead animals were recovered from the Rheinauensee.

Flea market in the Rheinaue

Between March and October, on the third Saturday of the month on the left bank of the Rheinaue, one of the largest flea markets in Germany with around 1,700 stalls from non-commercial providers takes place. Annual events in the Rheinaue are the large fireworks " Rhine in Flames " on the first weekend in May as well as the " Beer Exchange " on the last weekend in July and the "Family Games Festival ". In summer, bands play almost every day on a small stage in the Rheinaue beer garden: jazz, blues, rock (see also: Rockaue Open Air ), Latin and Schlager.