Publishing, editing and printing in Bonn (2011) 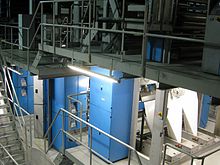 The General-Anzeiger is a regional daily newspaper . The distribution area includes the city of Bonn , the Rhein-Sieg district , the Ahrweiler district and the northern Neuwied district . The sold circulation is 59,706 copies, a decrease of 33.1 percent since 1998. Since June 1, 2018, the General-Anzeiger belongs to the Rheinische Post Mediengruppe .

The publishing house of the General-Anzeiger (General-Anzeiger Bonn GmbH, until 2019 under the name Bonner Zeitungsdruckerei und Verlagsanstalt H. Neusser GmbH) was founded in 1725 as the court printing company of Elector Clemens Augusts by Leonhard Rommerskirchen. It is owned by the Neusser family in the tenth generation. The General-Anzeiger has been published under its current title since 1889. Originally it was a joint project of the two publishers Hermann Neusser (1839–1909) and Carl Hauptmann , until the latter withdrew in 1891 due to differences over the newspaper content, so that Neusser became the sole owner.

In 2005, the Cologne-based publishing group M. DuMont Schauberg acquired shares in the publishing house of now 18% through a cross-shareholding , while Neusser GmbH in turn owned 9.02% in M. DuMont Schauberg. This participation ended in 2016. In April 2018, the General-Anzeiger announced that the Rheinische Post Mediengruppe and the shareholders of the Bonner newspaper printing company had concluded an agreement for the Rheinische Post Mediengruppe to take over all shares in the publishing house. On May 15, the Federal Cartel Office approved the sale; the transaction was completed on June 1, 2018.

In autumn 2017 it became known that the General-Anzeiger and the Kölner Stadt-Anzeiger had made illegal sales and territorial agreements in the years 2000 to 2016. To avoid mutual competition, the two newspapers had secretly divided their areas of circulation in the Bonn area. The Bundeskartellamt imposed a million-dollar fine on the Kölner Blatt, and the General-Anzeiger went unpunished thanks to a leniency program.

The General-Anzeiger , like most German newspapers in recent years to rest lost. The number of copies sold has fallen by an average of 3.1% per year over the past 10 years. Last year it decreased by 4.5%. It is currently 59,706 copies. The share of subscriptions in the circulation sold is 88.2 percent.

The General-Anzeiger appears Monday to Saturday in nine regional editions, each with differently weighted local sections: