Arsacids is the name of the dynasty founded by the Parthian Arsakes I , which began in the middle of the 3rd century BC. Ruled the Parthian Empire . 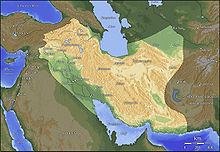 Approximate extent of the Arsacid Empire

Between 250 BC BC and 238 BC The Parthians rose against the satrap of the province of Parthia under Arsakes I and removed this area from the Seleucids' sphere of influence . After Arsakes' death, the region came again under the formal supremacy of the Seleucids, since their king Antiochus III. wanted to recapture the lost peripheral areas of the empire (so-called anabasis ). Around 170 BC They were able to shake off their vassalage and in the following decades they could expand their dominion - especially at the expense of the Seleucids - far south and west.

From around 140 BC The Parthian Empire extended from Mesopotamia to the Amu Darya and from the southern foothills of the Caucasus to Gedrosia . Since the conquest of Mesopotamia, the Arsakid ruler carried the title of King of Kings . In the changeable struggle with the Roman Empire , the Arsacids had to temporarily give up some areas in the west of their empire in the 2nd century , but soon regained them. Much more devastating were the civil wars, repeatedly triggered by usurpations , which weakened the country over the long term.

The last Arsakid great king, Artabanos IV , was killed in AD 224 by the Sassanid Ardaschir I , an insurgent sub-king from Persis , who then seized power in the empire and was crowned king of kings in 226.

In Armenia , however, the Arsacids were able to hold out as a dynasty for about 200 years (until 428) - albeit last under Persian suzerainty. As late as the sixth century, late ancient Roman authors like Prokopios mentioned Armenian nobles who referred to themselves as Arsacids. There were also sidelines of the Arsacids as rulers in Iberia and Albania .