The Egyptian goose ( Alopochen aegyptiaca ) is the only recent representative of its genus and is now usually assigned to the demi-geese . It is of African origin and lives on nutrient-rich subtropical inland lakes and rivers. It is considered the most common afrotropic duck bird .

In recent decades, the Egyptian goose, originating from captive refugees , mainly coming from the Netherlands, has spread along the Rhine in Central Europe, and is also found in urban parks, bathing lakes and other places frequently frequented by people.

The common German term Egyptian goose is derived from the river Nile in the Egyptian homeland of this species. This is also indicated by the scientific species name aegyptiaca . The generic name Alopochen , which comes from the Greek , means fox goose and is occasionally used in older literature for the shelduck , which occasionally breeds in fox dens. For the Egyptian goose, on the other hand, this designation is rather inaccurate, as it does not and tends to breed on trees. The name may also refer to the red-brown color of the back plumage, which is reminiscent of the fur color of the red fox .

Distribution area of ​​the Egyptian goose in Africa and in the areas of introduction: 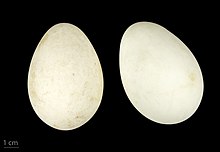 The Egyptian goose is characterized by its relatively high legs and dark eye spot.

Both sexes are the same, only the male is slightly larger. The comparatively “brightly colored” color of the adult animals sets in at around four to five months, when the eye and chest spots have fully developed. In addition to the usual coloration, there is also a slightly grayer morph , which can be differently pronounced. The color of the beak also varies from pale red to deep red. Captive refugees usually have very red beaks. Flying Nile geese have similar to the rust geese a large white Armflügelfeld.

The full moult of the adult birds begins towards the end of the breeding season. It begins with the change of small plumage . Then the swing springs are thrown off and the control springs are changed. The juvenile moult begins when the young birds are around three months old. First of all, the brown eye spot and, when they are around five months old, the chest spot is removed.

Appearance of the downy chicks

Downy chicks of the Egyptian goose have a similarly contrasting black-brown-white color as those of the shelduck . They are olive, earth brown to dark cinnamon brown on top. The forehead, face, neck and chest are whitish in color. A short pale brown line runs from the eye to the back of the head. The chicks also have straw yellow colored areas on the wings and are colored white on the underside of the body. In contrast to the downy chicks of the shelduck, they lack the dark spot below the eye. There are large areas of white paint on the wings and flanks.

The two sexes have different sound repertoires. Males hiss hoarse and panting. Only when flying up let a loud series of wräd-wräd ... listen. The females, on the other hand, let out a quick, loudly penetrating and almost trumpeting chatter. It is onomatopoeically circumscribed as honk-hää-hää-hää . When excited, these sounds sound even louder. They are then polysyllabic series of calls that sound like honk-honk-honk .

Egyptian goose family with eight chicks in Frankfurt am Main

The breeding season is triggered in the original distribution area by the onset of the rainy season. In West and South Africa, the breeding season falls accordingly in the months of June to September. In Kenya, on the other hand, Egyptian geese breed throughout the year.

The nest is with dunes padded. If the first clutch is abandoned due to malfunctions or if it is destroyed, a subsequent clutch usually occurs. The eggs are white and have a faint sheen. The incubation period is 30 days. Freshly hatched downy chicks have an average weight of 54 grams. Both sexes are involved in keeping the chicks. They are raised by the parent birds in shallow water areas and on nearby grassy areas. At around nine to ten weeks, the young geese are fully grown and able to fly.

Originally, the Egyptian goose was native to almost all of Africa except in the extremely arid regions. In historical times it also occurred in the Balkans , where it is now extinct. Even in the 19th century there were numerous observations in Hungary and Bulgaria . She probably brooded there during this time. However, this has not been proven with certainty.

In Africa their main distribution center is in the savannah swamps and along the rivers of East Africa. It also benefits from the water retention basins that have been created in South Africa. Both their population and their area of ​​distribution have increased there. In contrast, the Egyptian goose is rare in West Africa. It hardly occurs on the lower Nile. Their altitude distribution in Africa ranges from waters in the lowlands to waters at an altitude of 4,000 meters above sea level.

Spread outside the natural range

The Egyptian goose has been kept as an ornamental fowl in Europe since the 18th century, and by the end of that century there were free breeding pairs in Great Britain . This population grew to four hundred to five hundred animals by the late 19th century, and that number remained largely stable until the 1970s. Since the 1970s there has been a rapid expansion of a population originating from the Netherlands, probably formed from escaped birds . This wave of propagation occurs along the Rhine and its tributaries and has now reached the border with Switzerland in the south and Austria in the east across the Danube. In addition to the Netherlands, it is also established as a breeding bird in Belgium.

In Germany in 2010, the states of North Rhine-Westphalia, Lower Saxony, Hesse and Rhineland-Palatinate represented the core area of ​​the distribution of Egyptian goose. In Lower Saxony and North Rhine-Westphalia there are breeding occurrences in a quarter of all hunting grounds. In Hesse and Rhineland-Palatinate, the rate was 15 percent. In particular in Hesse, Lower Saxony and Rhineland-Palatinate there was a strong increase of almost 10 percent in breeding numbers from 2009 to 2013. All over Germany, broods were found in 23 percent of the territories participating in the 2017 comprehensive survey. The hunting distance in Germany increased by 90% in 2011/12 compared to the average of the previous 5 years and was almost 11,000. In the 2017/2018 season it was 23,644 animals. Since 2015, successful breeding was also found in Berlin, the last federal state, the Egyptian goose has been recorded as a breeding bird in all German federal states.

The Egyptian goose is one of the very successful neozoa . In the foreseeable future it will probably repopulate its former area in the Balkans via the Danube . Farmers' rents are welcome sources of food and one of the main drivers of successful settlement in recent years, as these stocks provide food even in times of need.

The main food of the Egyptian goose is grass, and grain fields are also regularly visited. Birds living in parks eat bread like mallards . Even severe winters like 1995/96 and 1996/97 could not negatively affect the Egyptian goose population. Due to the high rate of reproduction, it is to be expected that the species will spread even further and breed across the board in the lowlands of Germany. In addition to the rate of reproduction, their rapid spread is due in particular to their adaptability and their aggressive behavior towards other animals.

Outside of Europe, the Egyptian goose has established itself in the United States in Florida, Texas, and California. There are also smaller populations in Arkansas and other states. It is now also found in Israel and the coastal areas of the United Arab Emirates on the Persian Gulf . There is also evidence in New Zealand and Australia.

The increasing distribution of the Egyptian goose, for example in Germany, creates problems. In urban areas in particular, the Egyptian goose can be perceived as a nuisance, as the geese can aggressively conquer lawns and bike paths when they are in their territory, and thus disturb people looking for relaxation. Furthermore, the manure on lawns is perceived as a problem. In Frankfurt am Main, for example, the health department has found that the droppings of Egyptian geese in public outdoor swimming pools pose a health risk, especially for small children. The city administration has therefore decided to shoot the animals. However, this approach is controversial among scientists. The ornithologist Martin Kraft from the Philipps University of Marburg speaks out against the killing operation in Frankfurt's Brentanobad and questions the hazard potential of Nilganskot: "Such intestinal inhabitants occur everywhere and in many animal species, including birds" and also in humans. Dogs, cats and all other animals pose the same risk. Kraft continues: "The excrement is harmless as long as you don't chew it vigorously."

The distribution of the adaptable and aggressive Egyptian goose can have an impact on the native bird world, in particular on other waterfowl, for example local and isolated displacement. Egyptian geese are ascribed a pronounced aggressive behavior towards other water birds during the breeding season. More detailed research has shown that aggressive behavior affects other Egyptian geese and duck bird species weighing between 1,000 and 3,000 grams. The willingness to be aggressive depends on the density of birds in the water and not on the food available. Egyptian geese attacks almost exclusively affect the mallard . Attacks on young leading mallards sometimes result in the death of mallard chicks. However, young leading tufted ducks and pond fowl were not attacked. Cases are also known in which Egyptian geese have taken over white stork nests , peregrine falcon nests and barn owl nesting sites and prevented these species from breeding. Control was not recommended in isolated cases.

In 2017, the EU put the Egyptian goose on the legally binding list of invasive alien species of Union-wide importance under Regulation (EU) No. 1143/2014 . The regulation applies directly in all Member States. National regulations are only permitted if they are stricter than those in the EU regulation. As for the other species on the list, the Egyptian goose is now prohibited from importing, keeping, breeding, transporting, acquiring, using, exchanging and releasing. There is not only the obligation to set up monitoring systems and to minimize the effects of already widespread species, but according to Article 19 of this regulation, the member states must have "effective management measures" by 12 January 2019, which include "lethal or non-lethal physical, chemical or biological measures to eliminate, control or contain a population ”.

Egyptian geese were already kept as ornamental fowl by the ancient Egyptians , the Greeks and the Romans . In Western Europe they began to be kept as ornamental poultry in the 17th and 18th centuries. They are rarely found privately these days. Egyptian geese are too big for most private owners, which makes a corresponding size of the system necessary. Their calls are also very loud and they tend to be aggressive. Egyptian geese, however, are occasionally kept in park ponds as free-flying birds, which explains their spread as captive refugees.

Mythological significance of the Egyptian goose

Egyptian geese were sacred birds dedicated to the creator god Amun in the Theban area . Originally, the Egyptian goose ( Coptic : smon ) was one of the many gods who created the world and light, be it through his voice in the primeval eclipse ("the great cackling" - Gengen Wer ), be it through the depositing of the world ice in a sycamore tree in Heliopolis , from which the sun god Re was also created.

Egyptian goose as a neozoon