The Peter Pan berthing in Trelleborg, the bow thrusters ejecting water below the two signs can be recognized by the eddy humps on the water surface 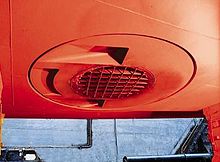 A bow thruster ( English bow thruster ; also bow or stern thruster ), the ship below the waterline transversely mounted to the actual direction of travel drives, which for flexible maneuvering used by drive to the side becomes possible, and the turning radius decreases.

Such drives were first only bug built ships, therefore has in everyday language, the term bow thruster ( English bow thruster naturalized), although it is not "rowing" is a in the conventional sense. The system consists of a transversely arranged, tubular passage (tunnel) through the entire width of the ship under the waterline in the front tenth of a ship. A propeller is arranged in this pipe , which can pump the water through the pipe from one side of the ship to the other. Due to the thrust generated as a reaction , it is possible to move the bow of the ship abeam - even without the rudder effect by moving forward. The respective direction of the maneuver ( port or starboard ) is determined by the selectable direction of rotation of the propeller or by adjusting the propeller blades. The propeller is typically driven by an electric or hydraulic motor installed in the ship.

Due to hydrodynamic effects - in particular the Coandă effect - the bow thruster can only be used up to a speed of five knots . At higher speeds it is almost ineffective.

Use of the bow and stern thrusters

A bow thruster can make the use of tugs for berthing and casting off maneuvers unnecessary in simple weather conditions and smaller ships . However, especially with large ships , an assistant tug is usually required to compensate for currents or gusts of wind when maneuvering. In the meantime, more and more yachts have installed a bow thruster. A bow thruster is not an auxiliary rudder to keep the ship on its course or to bring it faster on course, but only an aid in docking and casting off maneuvers.

Modern ferries , cruise ships and, in some cases, newer cargo ships, but also modern motor yachts have an additional transverse thruster system installed in the stern , the so-called stern thruster , in order to enable traversing (lateral movement of a ship) in cooperation with the bow thruster. Large ferry and cruise ships often have two or three bow thrusters in the bow.

Another rotatable variant of the transverse thruster control system , often referred to as a pump jet , is used in inland shipping as a combined additional drive and bow thruster on the underside of the ship in the bow area. According to the laws of hydrodynamics, water is sucked in through a central lamellar grate in a non-directional manner, i.e. from all directions. Directionally incorporated opening channels discharge the water at as flat an angle as possible to the ship's bottom in a single, controllable direction. Typically, the drive is electric from the on-board battery, which makes a certain maneuvering possible, for example in the marina, without starting the main engine. The non-directional suction means that some of the maneuvering force is dispensed with, but the jet and thus its recoil can be aligned 360 °. In addition, the compact device creates hardly any flow resistance when driving, especially in a forward orientation.