Kiesgrube is a redirect to this article. For other meanings, see Kiesgrube (disambiguation) .

In a gravel surface mining support is provided the construction materials gravel , sand and gravel . It is also known as a gravel pit or gravel pit . On a large industrial scale and including the processing plants, one speaks of gravel works or gravel works . Typically, larger gravel works also open up several gravel pits in order to process the quarrying in a central location. 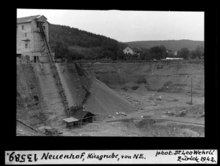 Haida gravel pit in the municipality of Röderland

Gravel pit near Geinsheim am Rhein

Gravel pits have an extension of between 50 and 300 meters and they are excavated with excavators or similar clearing equipment. The excavation depth can range from a few meters to almost 50 m, the possible excavation can amount to many 100,000 cubic meters.

In Germany, Austria and most EU countries, the permit for the mining of bulk raw materials is now subject to strict environmental protection and zoning requirements .

Many operators of gravel pits also work as transport companies , for larger earthworks or for the excavation of construction pits .

Larger deposits of these sediments , known as “ bulk raw materials ”, can be found on river terraces - for example in the Rhine plain - and as terminal moraines of glaciers from the Ice Age . Due to large-scale transport, mountain formation or other tectonics , the gravel can occupy extensive layers in the geological subsurface - for example in northern Germany , in the area of ​​former Ice Age glaciers or in the molasse zone of the Alpine foothills, e.g. B. in Upper Swabia .

During floods , in valleys of torrents and in earlier meanders , large amounts of scree and gravel can be deposited or gravel banks can form.

Termination of dismantling and re-use

Abandoned opencast mines are examined for any contaminated sites . The steep slopes and edges must be flattened. If the cavities and pits that were created during extraction remain open after mining has ended, they usually fill with groundwater and a quarry pond is created . These lakes (like the brick ponds ) are used later - and often even during this time - as a fishing or bathing lake and, if suitable, part of a recreation area .

Even birds and nature reserves may arise. Particularly in shallow water zones, which are often formed when fine sands are reintroduced from the treatment plants, there are excellent living conditions for a large number of sometimes threatened species. If the gravel was extracted in a groundwater flow, the quarry pond remains ice-free even in winter. Here, even in severe winters, waterfowl find a resting room and a source of food.

If there is little or no contact with the groundwater, the hole is usually filled. A landfill for excavated earth, building rubble or household waste can be considered here . In earlier times, some pits were also provided with a special seal and used to store hazardous waste , which today has its own disposal channels. With foils ( geotextiles ), however, household waste dumps are now also secured.

Some of the former gravel structures are used as swing golf courses (e.g. in Handewitt near Flensburg , Schülp in Mittelholstein ), others as motocross courses ( e.g. in Kayhof , Ostholstein ), for youth parties ( e.g. "Stonehenge" in Upper Austria ) or for practical exercises ( e.g. from diving teams). In recent years, more and more photovoltaic systems have been built on the former mining areas.

The intended subsequent use is already determined in the application process within the framework of spatial planning in the landscape maintenance accompanying plan (LBP) . Priority is given to the demands of nature conservation, as mining represents a serious interference with the natural balance and the landscape. A balance has to be created here, basically in a ratio of 1: 1. This is done by renaturing the mining area or providing a compensation area of ​​the same size.