Flood operation of the THW

When flooding refers to a condition in which a normally dry lying bottom surface is completely covered by water. In addition to particularly strong earthquakes, flood disasters have so far been the most serious natural disasters for people .

In the North Sea flood of 1953 inundated areas in the delta of the Meuse , Rhine and Scheldt

Flooding of the Fukushima nuclear power plant by a tsunami on March 11, 2011

The inadequate, sometimes non-existent drainage of large amounts of water inland and on islands can (at least in part) be caused by humans: 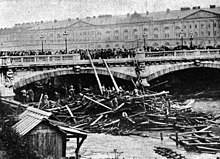 Major burst water pipe on Leopoldstrasse in Munich on January 11, 2006 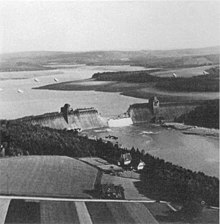 In general, the question arises as to whether damage caused by flooding on built-up properties is “fateful” for the injured party if flooding through adjacent bodies of water or inadequate drainage systems can be foreseen due to the location of the damaged area. Builders should also be aware of the risk they run when they build systems below the ground in an area with a high water table.

Floods can cause significant water damage to people's property and endanger the health and life of people and farm animals. If there is such a danger, rescue workers speak of a water emergency . A distinction must be made between temporary flooding, which ends when the penetrated water runs off or is pumped up, from permanent flooding. The latter particularly threaten low-lying coastal areas as a result of the climate-induced rise in sea levels .

However, not every flood is a problem for people. For example, in desert areas without the regular overflow of rivers such as the Nile, apart from oases, there is no fertile land for arable farming and horticulture , and from an ecological point of view, natural wetlands that are regularly flooded are rated as extremely valuable.

In Germany, too, there are cultural landscapes whose inhabitants owe their prosperity to the fertility of their land, which in turn can be explained by sediments that were left on the ground after floods. This applies, for example, to the Artland , which is largely located in the Hase Inland Delta .

The term flood as economic damage is at the same time a legal term that is particularly relevant in connection with building, household, motor vehicle partially comprehensive and business interruption insurance. If this insurance provides protection against natural hazards, the risk of flooding is usually also covered. For the purpose of risk assessment and thus premium calculation, the General Association of the German Insurance Industry has developed a geographical information system: the zoning system for flooding, backwater and heavy rain (ZÜRS). The basis is statistical calculations by the software company IAWG (engineering hydrology, applied water management and geoinformatics) in Ottobrunn.

According to the Federal Court of Justice, the term “flood”, ie “flooding of the land on which the insured building stands (insurance property)” is to be interpreted from the perspective of an informed policyholder. According to this, the "flooding of the ground" is to be assumed when considerable amounts of water accumulate on the surface of the site. In contrast, the Dortmund Regional Court ruled that it was necessary that the normally dry area be a floor area in the sense of an area level with the ground. Flat roofs or balconies are not considered to be "floor areas" because they are not level. Damage caused by (dew) water penetrating the roof is therefore not covered by building insurance. There is already a lack of flooding, unless there is an accumulation of water on the surface of the site. Flooding of terraces is also not considered as insurance damage (despite the fact that it is level with the ground). The LG Nürnberg-Fürth defines the term flooding further.