This article deals with the Lower Saxony city of Wunstorf, for terms with the same or similar names see Wunstorf (disambiguation) .

Wunstorf is a town and independent municipality in the Hanover region in Lower Saxony on the Steinhuder Meer , in the Calenberger Land . In Wunstorf there is a large psychiatric clinic, the KRH Psychiatrie Wunstorf of the Hannover Region Clinic. The Wunstorf Air Base with the Air Transport Squadron 62 is located in the district of Klein Heidorn .

The Westaue , which joins the Leine a few kilometers northeast at Bordenau , flows through the city from west to east. In the west lies the Steinhuder Meer nature reserve .

Wunstorf in a Merian engraving around 1654

The name of the city is derived from the early village settlement "Wonherestorpe" (around 700). The "Vuonherestorp" Kloster put Louis the German on October 14, 871 under King protection by the king of the Bishop Theodoric of Minden founded with his consent Kanonissenstift in Wunstorf the immunity rights conferred. The collegiate church was destroyed by lightning in 1010, in 1181 “Wunstorf” was mentioned as “ civitas ”; a Count of Wunstorf was first mentioned in a document in 1235.

In 1261 the residents of Minden received the right of the city of Minden "for loyalty and obedience". In the Middle Ages, which had Earl of Roden in Wunstorf advocacies .

In 1446 the Counts of Wunstorf sold their county to the Bishop of Hildesheim. In 1570 Ortjes Dove and his helpers infected their city in numerous places at the same time. Only 208 of 700 buildings were spared. In 1624 the army led by Johann T'Serclaes von Tilly sacked the town. A dragoons regiment of the Prince of Wales made the town a garrison town in 1788. From summer 1803 to October 1805 French troops took up quarters in the city. Then Prussians, Swedes, English and French invaded one after the other. Until 1813 the municipal administration was carried out by a mayor . After that, Russian troops moved in for two years. For the years 1816 to 1874 Wunstorf was the location for the mounted artillery of the new Hanoverian army.

In 1847, Wunstorf with an island station became the junction of the Hanover – Minden and Wunstorf – Bremen lines . On January 31, 1874, a teacher’s seminar was founded in the building of today's Hölty-Gymnasium.

In 1880 the Hanoverian provincial administration set up a "correctional facility" in the vacated garrison buildings on Südstrasse and in 1883 incorporated a rural poor institute. From 1885 onwards, the province built numerous buildings for the growing Provinzial Heil- und Pflegeanstalt, which are still part of the cityscape today. Between 1940 and 1941 the institution was the scene of the deportation of mentally ill people as part of the T4 campaign . Patients of the Jewish faith were also moved in from northwest Germany and deported from here. In 1952 it became a state hospital . Under the directorate of Asmus Finzen , it became a starting point for the psychiatry reform in 1976 . From 1988 to 2008, Andreas Spengler built up the care services of the institute's outpatient clinic from here . The hospital became the property of the Hanover region in 2007 .

The Hanoverian banker Sigmund Meyer founded the "Wunstorfer Portland-Cementfabrik A. G.". In 1889 or 1896 the large cooperative dairy was built on Hindenburgstrasse, and in 1898 construction began on a municipal power station.

On March 3, 1935, Wunstorf became a Wehrmacht garrison . Since the Jagdgeschwader 2 "Boelcke" was stationed at the new Wunstorf Air Base in 1936 , Wunstorf became one of the starting points of the Condor Legion .

On January 4, 1943, the engine driver of the SFR 2304 in front of Wunstorf failed to see a signal indicating a “stop” during a heavy snowstorm and drove onto the D 8. 25 people died and 169 others were injured.

On April 7, 1945, the Allies invaded and the Royal Air Force took over the air base and continued to operate it as a military airfield.

In June 1946, large transports with displaced persons arrived from Uelzen. In 1948 and 1949, the Royal Air Force flew from the air base as part of the Berlin Airlift . In 1950 the city was connected to the Ruhrgas long-distance pipeline, and in 1954 the Catholic St. Bonifatius Church , built on the site of the old chapel, was consecrated. 1956 began with the construction of the sewer system. In March 1958, the British handed the air base over to the Bundeswehr Air Force . First the pilot school S and from 1978 the air transport wing 62 was stationed here.

The Evangelical Corvinus Church was built in 1967 . From 1970 to 2013 there was the second Catholic church, the Holy Cross Church in Luthe. In 1971 they began to regulate the western floodplain to improve flood protection. In this context, some bridges and roads were rebuilt. 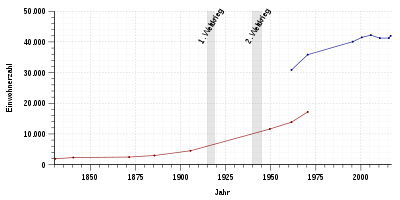 The three Evangelical Lutheran churches in Wunstorf belong to the Neustadt-Wunstorf parish:

The collegiate church of St. Cosmas and Damian is a cross-shaped, three-aisled vaulted basilica with a west tower, the oldest parts of which date from the 11th century. Between 1853 and 1859 the building was comprehensively renovated.

The town church (also called market church) St. Bartholomaei , Stiftstrasse 1. The tower and the choir remain from a building from the second half of the 12th century. The nave was renewed around 1700 as a simple hall church . The interior, which was restored in 1989, still has some older pieces of equipment, including a late Gothic triumphal cross group from the end of the 15th century and a statue of the Madonna from 1520. The polygonal pulpit is dated 1640 and 1642.

The Corvinus Church from 1967 is located on Arnswalder Straße, and the neighboring kindergarten also belongs to its community.

The St. Johannes community center from 1974/75 was located at Albrecht-Dürer-Straße 1; it was de-dedicated in March 2012 to make way for the new building of the diaconal-church center St. Johannes, completed in 2015, among other things . In 1976, the St. Johannes Protestant day-care center was set up next to it.

Other Evangelical Lutheran churches are located in localities incorporated into Wunstorf, such as the Sigward Church in the Idensen district . The Romanesque church, built around 1130, still has the Romanesque painting from the time it was built and the oldest bell in Lower Saxony.

The hospital church, built in 1885, is located in the row of buildings of the KRH Psychiatrie Wunstorf on Südstrasse.

The Catholic parish church of St. Bonifatius was built in 1954 as the successor to a mission chapel that was demolished in the same year and was built in 1903 according to plans by Josef Fehlig . The branch church Heilig Kreuz in the Luthe district was profaned in 2010 and demolished in 2012. There are other Catholic churches in the villages of Bokeloh and Steinhude.

The "K21 - Church for the 21st Century" is part of the Bund Freikirchlicher Pentecostal congregations . It was founded in 1993 and until 2014 was called "Freie Christengemeinde Wunstorf". The Methodist Church and Jehovah's Witnesses are also represented in Wunstorf.

The first post-war city council was elected on September 13, 1946: The 19 seats were divided between the SPD, NLP (later DP ), CDU, KPD, FDP and independents.

The local election on September 11, 2016 resulted in the following distribution of seats:

Mayor has been Rolf-Axel Eberhardt (CDU) since 1999; he was confirmed in office in 2006 and 2014. His deputies are Ulrich Troschke (SPD), Birgit Mares (Greens) and Martin Pavel (CDU). The youth mayor is Lareen Bernhardt.

The design of the coat of arms of Wunstorf comes from the chairman of the former Verkehrs- und Werbevereins e. V. Werner Schwippert and from which in Isernhagen born and later in Hannover living heraldry and crest painter Gustav nations , which includes the coat of arms of Großburgwedel , Melle village , Wennebostel and many other towns has designed.

The abbey, exhibition center and seat of the city library

Mill Paula in the district of Steinhude

There are several clubs in the core city of Wunstorf. The gymnastics and sports club from 1862 Wunstorf e. V. has the largest number of members with around 3000 members. The second largest club is 1. FC Wunstorf v. 1919 e. V . Another larger association with around 800 members is the Wunstorf Kneipp Association .

The city of Wunstorf has been a member of the German Language Association since July 21, 2009 .

Car races for the German Touring Car Championship (DTM) and Formula 3 took place on the air base in Wunstorf until the 1990s.

Letterhead from the Wunstorfer Margarine Werke ; Produced
by A. Harbers & Brager in 1897

Up until the middle of the 20th century, Wunstorf was characterized by large companies such as the cement factory (Portland cement, with marl pit on the A 2), the dairy in Hindenburgstrasse, the Wunstorfer Margarine-Werke (later Margarinewerke Union, then SOLO or IGLO - Feinfrost GmbH, most recently VION Convenience GmbH with the closure of the site on March 31, 2014) and the asbestos processing company Fulgurit-Werk Luthe . Other employers were the Deutsche Bundesbahn, Kali + Salz, Heinz Kettler and the Steinhuder Meer-Bahn . 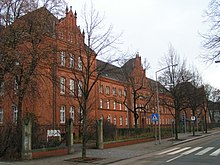 The Hölty-Gymnasium is named after the poet Ludwig Hölty . It is one of the largest high schools in the region. There are also two secondary schools, one Protestant Integrated Comprehensive School (IGS), nine primary schools and two special schools. The music school Wunstorf, the adult education center (VHS) Hannover Land in Wunstorf and the art school Wunstorf complete the offer.

Wunstorf is on federal highways 441 and 442 . The A 2 federal motorway is in the immediate vicinity with the Wunstorf-Luthe and Wunstorf-Kolenfeld junctions.

Regional Express trains and S-Bahn trains on the Hanover – Minden line and the line to Bremen stop at Wunstorf station ( station category 3) . From the Steinhuder Meer-Bahn (StMB), whose route used to run through the city, there is still a connection to Bokeloh for goods traffic to the K + S AG Sigmundshall potash plant .

Several bus lines of the Greater Hanover Transport Service serve around 100 stops in Wunstorf. Most of these lines are linked to rail traffic at the station.

For the recreational and commercial vessels , there are the ports Wunstorf .

Municipalities in the Hanover region

Districts of the city of Wunstorf