This article describes the town of Burgwedel in Lower Saxony. A new building area in Hamburg-Schnelsen also bears this name.

Burgwedel ( Borwee in Low German ) is a town in Lower Saxony in the Hanover region .

The settlement area of ​​the city consists of several village cores extended by suburban settlements , which are still separated from one another by agricultural areas and forests. Of the forest areas in the district of the city, the Fuhrberg state forest is particularly noteworthy. With the Hastbruch, the Trunnenmoor , the Oldhorster Moor and the many forests, there are numerous nature reserves in the town of Burgwedel. To the north of the Wettmar district extends the Wietzenbruch, a huge moorland and pasture landscape that is uninhabited apart from a few courtyards and extends to the border of the Celle district .

The Wietze river , which touches the western edge of the municipality, as well as the Wulbeck and Hengstbeeke brooks are naturally formed bodies of water . The Wulbeck rises in the Oldhorster Moor, is then partly the border to Burgdorf in the east and then leaves the municipality north of Fuhrberg, in the state forest, to finally flow into the Aller at Wieckenberg . The Hengstbeeke is located up to the confluence, near the Fuhrberg / Mellendorf motorway exit, into the Wietze in the municipality. The upper course in the main town of Großburgwedel has had a different name since time immemorial, first Möhlenbeeke. After the place name was translated into High German, it was finally given the name "die Wedel".

In addition to numerous drainage ditches, there are two small lakes in the area of ​​man-made surface water in the Burgwedel area, which are now used by local tourism: The Würmsee was created by peat cutting . The Springhorstsee was created in 1970 through sand and gravel mining. In 2014 the Würmsee had largely dried up at times. At the beginning of 2016, a larger area was covered with water and measures against silting were planned. The city of Burgwedel has leased parts of the lake property since spring 2016, pumps groundwater back into the Würmsee at night in summer, which stabilizes the water surface, removes neophytes and plans to remove mud or parts of plants to a moderate extent in some bank areas. 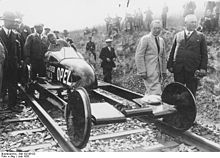 The rocket car Opel RAK.3 on rails on the test track in Burgwedel, 1928

The name Burgwedel is derived from the Low German names Groten- and Lüttschen Borwe , for Groß- and Kleinburgwedel.

The word Borwe came from Borchwede from the sentence “Dat schollt Borch wedde” (High German: “This should be a castle”). Borch refers to an administrative seat.

Burgwedel was first mentioned in documents in 1324 as the administrative center of the County of Burgwedel, later the Burgwedel District Bailiwick. The place was often almost wiped out by devastating fires, the last time in 1828, with two thirds of the place being destroyed.

Two routes for rail vehicles were built to and through Burgwedel. In 1901 line 17 of the Hanover tram to Großburgwedel was built, which was withdrawn to the Fasanenkrug in Hanover in 1956. In addition, the Hanover – Celle railway line was built through the city with a stop in Großburgwedel.

The Reichsbahn line in Burgwedel was used by Opel in 1928 as a test track for an unmanned rocket-powered sled.

The municipality of Burgwedel was created on March 1, 1974 as part of the territorial reform from the previously independent municipalities of Engensen, Fuhrberg, Großburgwedel, Kleinburgwedel, Oldhorst, Thönse and Wettmar. On August 26, 2003, the municipality of Burgwedel received city ​​rights . Until December 31, 2004, Burgwedel belonged to the then administrative district of Hanover , which, like all the other administrative districts of Lower Saxony, was dissolved. 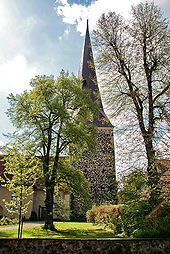 The Protestant St. Petri Congregation is the largest religious community in Burgwedel. The St. Petri Church in the center of Großburgwedel, after which the parish is named, is a partly Romanesque, partly Gothic church, which was probably built around 1200. The copper-clad church tower is about 60 m high (masonry 20 m, spire 38 m, spire 2 m).

The St. Marcus parish is grouped in the Wettmar-Engensen-Thönse parish. Its center is St. Mark's Church in the Wettmar district, which was completed by the architect and later consistorial builder Conrad Wilhelm Hase in 1854–1855.

The center of the Evangelical Lutheran Fuhrberg parish is the Ludwig Harms Church in the old village center.

The Catholic St. Paul Parish of Burgwedel is the second largest religious community in the city. It belongs to the Diocese of Hildesheim and thus to the Nordic Church Province of Hamburg . Before St. Paulus was raised to a parish parish in 1976 with the re-registration of the dean's office in Hanover-North , it had already been appointed parish vicarie in 1969 and parish in 1970. Before that, the Burgwedel Catholics were also looked after by the parish of St. Nikolaus in Burgdorf. The hexagonal church building designed by the Hanoverian architect Karl-August Muth, which offers space for around 300 believers, was given the patronage of the Apostle Paulus , the patron saint of the then incumbent Pope Paul VI, by Hildesheim Bishop Heinrich Maria Janssen . , consecrated. The church building shows colored glass windows by the Braunschweig artist Claus Kilian , which depict the Way of the Cross . There is also a triumphal cross above the altar and special sculptural work on the ambo and church doors. Before the St. Paulus Church was built, Catholic services were held in the Protestant St. Petri Church.

The parish also includes the neighboring Isernhagener districts FB , HB , KB , NB , Neuwarmbüchen and parts of Kirchhorst and has 3769 parishioners (as of January 1, 2017).

The New Apostolic Church is located in the immediate vicinity of St. Paulus Church in the Osterwiesen residential area.

Since autumn 2005 there has also been an evangelical free church under the name “Freistil”.

The city ​​council of Burgwedel consists of 34 councilors. This is the specified number for a municipality with a population between 20,001 and 25,000. The 34 council members are elected by local elections for five years each.

The incumbent mayor is also entitled to vote in the city council.

The last local election resulted in the following distribution of seats immediately after the election:

Domfront (Orne) , city in France ( Orne , region Normandy ), as a sign of the partnership was transformed the main square in the fall of 2008 and declared a Domfrontplatz

Burgwedel is the seat of the drugstore chain Rossmann and the branch company KIND-Hörgeräte . Furthermore, the animal vaccine manufacturer Burgwedel Biotech (formerly Essex Animal Health, belongs to MSD Sharp & Dohme , also prepares vaccine against the Ebola virus), the bakery decor manufacturer Pickerd , the orthopedic company Thuasne Thämert, the cosmetics manufacturer Hildegard Braukmann, as well other medium-sized and small businesses are located in the Großburgwedel industrial park. In addition, there is a branch of the furniture store IKEA , which opened in 1976, in the immediate vicinity of junction 54 of the federal motorway 7, making it the second oldest branch still in existence in Germany.

The Protestant Pestalozzi Foundation is an institution that goes beyond Burgwedel and has a wide range of offers in the field of training and education, as well as kindergarten, youth welfare, disabled assistance and kindergarten .

In the area of ​​the city of Burgwedel, the Fuhrberg waterworks is one of the most important water supply works in the state capital of Hanover , and there is another waterworks at Wettmar for local supply.

The Großburgwedel Clinic , which is part of the Hannover Region Clinic, is located in Großburgwedel. At the end of 2008, volunteers succeeded in opening a recognized board for those in need in Burgwedel.

Pedestrian zone in the center of the Großburgwedel district

The A 7 runs through the area of ​​the city of Burgwedel with junction  54 (Großburgwedel). It connects the commercial areas with the company headquarters of Rossmann and the furniture store IKEA directly. A network of bypass roads that has been expanded in recent years is intended to relieve the city center of through traffic and also creates a direct connection from the motorway junction to the school and sports center as well as to Burgdorf and Wedemark.

The important Hanover – Celle railway line also runs here . At the Großburgwedel stop, the trains of the local rail passenger transport on the Göttingen - Hanover - Uelzen line , which has been served by the Metronom Railway Company since December 2005, stop every hour. It uses double-decker push-pull trains from the vehicle pool of the Landesnahverkehrsgesellschaft Niedersachsen mbH ( LNVG ).

In Großburgwedel there is a grammar school , an integrated comprehensive school , a secondary school , a special school (focus on learning) and a primary school . Other primary schools are located in Fuhrberg, Thönse, Kleinburgwedel and Wettmar. Pupils in grades 5, 6 and 7 have the opportunity to accept the offer of an "open all-day school" from Monday to Thursday including lunch, homework supervision and subsequent club offer.

Carl Graf von Alten on the battlefield of Waterloo

People for whom a stumbling block was laid in Burgwedel

Municipalities in the Hanover region

Districts of the city of Burgwedel