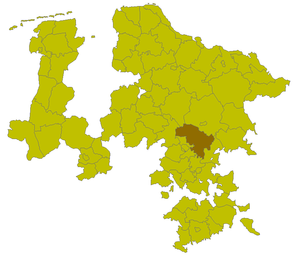 Location of the district in the province of Hanover (1905)

The district included the districts of today's cities

At the beginning of 1974 the district bordered clockwise in the north, beginning with the districts of Celle , Peine , Hildesheim-Marienburg , Hanover , Neustadt am Rübenberge and Fallingbostel .

The following is a graphic representation of the population development:

The following table lists all municipalities that belonged to the Burgdorf district between 1885 and 1974, as well as all incorporations:

On July 1, 1956, the district was assigned the distinguishing mark BU when the vehicle registration number that is still valid today was introduced . It was issued until February 28, 1974.

Disbanded in 2016: District of Osterode am Harz

Counties and city districts in the Prussian province of Hanover