The title of this article is ambiguous. Further meanings are listed under black (disambiguation) .
Black
color code: # 000000

Black is the darkest of all colors and, like white and gray, belongs to the achromatic colors. The color and brightness perception of blackness arises in the absence of a visual stimulus , i.e. when the retina perceives no light waves or only light waves of low intensity in the visible spectrum .

A body has the “ body color ” black if it reflects (almost) no light when illuminated with all frequencies of light ; As a light color , black is the non-emission of any light frequency. 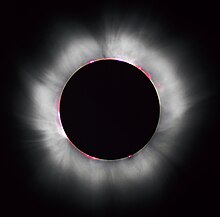 There are several different roots in the Indo-European language stem for the absence of light , for example black in English ; it comes from the Old English blæc ("black, dark", also "ink"), from Proto-Germanic * blakkaz ("burned"), from Proto-Indo-European * bhleg- ("burn, shine"), from the stem * bhel - (“seem”), related to Old Saxon blak (“ink”), Old High German blach (“black”), Old Norse blakkr (“dark”), Dutch blaken (“burn”) and Swedish bläck (“ink”). In Latin two synonymous words exist for black: ater and niger . The latter ("strong black") prevailed and occurs in Romance languages, such as noir in French , and in the country name Nigeria .

The ambiguous use of the term color makes it unclear whether black is a color. In everyday language, both black and white are usually viewed as colors. In technical terminology, a distinction is made between colorant and color stimulus , which explains the designation of black as achromatic color, as it lacks the colourfulness, the chroma.

As a sensory perception ( light color ), the achromatic color black influences the color quality , i.e. the degree of purity or saturation of other colors. In physical terms, black means the absence of (visible) light of any wavelength. As a body color , black is the absorption of all light frequencies.

Black solar balloon over a snowy meadow. It's black to absorb as much sunlight as possible. 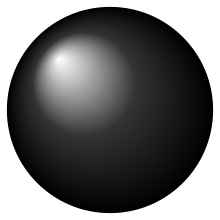 The achromatic color black results from the subtractive color mixture by mixing the colors cyan , magenta and yellow according to CMYK in the ratio {100,100,100, x} (where x can stand for any number between 0 and 100) or {0,0,0,100}. Black has the designations RAL 9005 in the RAL color system and is achieved with colorants that absorb maximum, mostly through soot , but also through coloring with aniline black . A mixed technique in four-color printing is called fat black .

The black standard in color measurement is represented by a hole in an (ideally) matt-lined hollow body . The aim of this apparatus is that an incident light beam (from the ambient light) "dies" inside. As a result, no more photons and therefore no more light emerge at the exit opening.

In fashion, the color black was and is sometimes considered elegant and refined, including in Spanish fashion of the 16th century

Black stands for elegant, exclusive. By definition, gloss does not belong to "color"

The definition of color according to DIN excludes other visual effects such as gloss or structure. A glossy black surface can reflect light. In terms of measurement technology, however, gloss can be excluded when determining colors; a “blacker” black can be (physically) achieved.

"[Color is] ... that visual sensation of a part of the field of vision that appears structureless to the human eye, through which this part can be distinguished from a likewise unstructured adjacent area seen at the same time when observed with one eye with one eye." (Definition according to DIN 5033 )

With this in mind, the currently (as of July 2014) deepest, ie “blackest” (matt) black surface was developed by the British company Surrey NanoSystems . The surface, known as Vantablack , consists of carbon nanotubes that grow on a film and practically "disappear" any structure due to the lack of reflection. This surface is deep black because only 0.035% of the light in the visible range is reflected (reflected). Previously, a substance surface made of nickel and phosphorus from the National Physical Laboratory in London with a reflectance of 0.18% was considered the deepest black.

In order to minimize unwanted stray light (probably from gloss), the housings and components of cameras , telescopes and other optical devices are made of matt black inside. Black was the light-tight adjustment cloth under which the photographer “crawled” in order to keep ambient light from the photo plate while focusing . Also black are the light-tight bags with two sleeves for the hands, in which films can be handled in the dark, shielded from the ambient light. Another application of this kind were the black blackout blinds that were used in the Second World War to dampen artificial light sources in living areas against the view of attacking bombers. Black foils are used in horticulture, for example to cover the plant environment light-tightly so that weeds can develop.

Magicians and stagehands are often dressed in black in order to optically step back or (partially) disappear from the illuminated scene . By default, stages are very dark or black in order to absorb light so that the lighting has a targeted effect on what is illuminated.

In televisions and computer monitors, “black” results from the non-emission of any intensities of the “luminous points” red, green and blue ( additive color mixture ) that generate color stimuli . "Black" has the value RGB = (0, 0, 0) in the RGB color space . (Hexadecimal representation, 8-bit per color channel: 00 00 00).

For conventional monitors, the respective material color of the screen surface corresponds to the blackest displayable value ("black value") when it is switched off or locally not activated or completely darkened and is usually only a dark gray . The reason is the reflected ambient light.

Thanks to special surface coatings, it has been possible in the laboratory to reduce the reflectance of materials to 0.035 percent.

The total absence of light led to the designation of physical effects as black body (completely absorbed) and black hole (strong gravitation swallows the light ).

The production and use of black pigments in painting has been proven at least since the 1st century. It was plants Black selected from pomace obtained, or ivory black (fumed Ivory) was used.

The black dyeing of fabrics was a special artisan art, the black dyeing usually had its own guild. The lists contain detailed assignments and information on black dyes and black pigments . The term black art is also derived from the manual or artistic use of black printing ink .

In the narrower sense of “color”, it is used in the terms black earth and black sun .

The most important black pigment is soot ; the color ranges from deep brown to black, depending on the grain size.

"Death" controversial (see Discu), "Power" largely unproven, "Politics" - Black for Catholicism and for Reformation?!? Afaik use the churches purple and yellow ?; There is also a lack of evidence for "China" and "Metal-Szene".
- arilou ( discussion ) 10:08, May 12, 2014 (CEST) 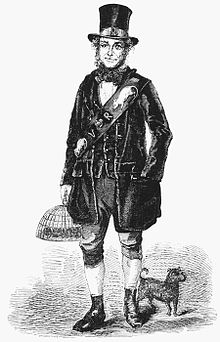 In Germany, “black” passed over to the CDU and CSU parties after 1945 . The color designation was also transferred to the black-yellow coalition and other political alliances of the CDU / CSU. Analog apply in Austria Representatives of the People's Party as blacks and the People's Party as the blacks . (in contrast to SPÖ (red), FPÖ (blue), green)

Black is the color of anarchism and its currents. The black block uses the color designation for uniformity. On the other hand, black is used as an assignment → black groups .

In Italy , before and during the Second World War , black stood for a fascist attitude (→ black shirts ). 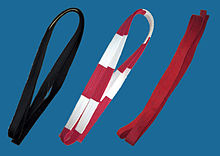 The belt colors of the master degrees in Budo .

In many martial arts - such as Jiu Jitsu , Judo , Taekwondo , Qwan Ki Do and Karate - a belt (Japanese obi ) is worn as part of traditional clothing (Japanese keikogi ). The black belt represents the level of knowledge of Budoka and is awarded and worn after passing the first master's examination, the so-called Dan exam. The person is then also called a Dan carrier . It should be noted that a Dan carrier is not necessarily a master. This term does not exist in traditional Budo.

In shooting sports , a good shot hits the mark . This refers to the black color in the center of the target . This gave rise to the phrase " hit the mark " .

In the Chinese culture , black is a symbol for darkness, honor, death, winter and north ( five-element teaching ). In Maoism , in contrast to the system-immanent red, it represented the counter-revolution .

The black scene gave its name to black as the main color for clothing, accessories and other equipment.

Black is also the leading color for clothing in the metal scene . In the 'harder' varieties of Metal ( Black Metal , Death Metal ), black appears in plain colors and in camouflage patterns for clothing and also for everyday objects (backpack, tent, ...).

In combinations such as “ black magic ”, “ black pedagogy ”, “ black psychiatry ” and “ black medicine ”, the adjective “black” contains the ascription of an evil, harmful intention, as well as an evaluation and connotation of extreme backwardness.

In the liturgical colors , black stands for mourning and death . In non-Christian cultures, black is also used in this context and continues as a symbol for negative events.

In heraldry, black ("sable") is one of the classic tinctures and, in contrast to the metals gold and silver , is referred to as color . In older heraldic works the color is called cabbage color .

"Black (r)" is often the name for a person of African descent and correspondingly dark skin color, see African American . Depending on the language and historical context, words derived from synonyms for “black” (also negro from Latin niger ), such as “ nigger ”, can have a derogatory and racist connotation in many cultures (see also Neger and especially the section Occurrence in other languages ).