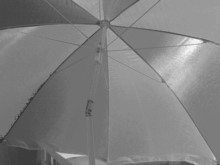 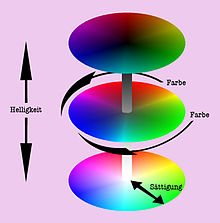 A color is said to be achromatic if it has neither a specific hue nor saturation . Achromatic colors are black , gray and white . The more precise restriction is necessary for general usage because they have no color cast . Achromatic colors differ from one another only in their lightness value . Depending on the brightness, there are gray levels .

The chroma of the achromatic colors is by definition zero. With increasing chroma, the optimal colors result , which in a suitable case are the spectral colors .

Achromatic is to be regarded as a color. Manfred Richter derives this from the fact that two surfaces even differ if they are just differently bright. Color is the property that distinguishes two unstructured adjoining surfaces when viewed with one eye without moving the eye.

“That may seem strange to some [...]. But once he has the experience that a certain brown differs from a certain orange only in its lightness (ie the orange can be made exactly the same by darkening to that brown), he will see the correctness of the assertion that two Surfaces of different brightness just show two different colors, because who will describe orange and brown as two identical colors? So two different light grays are two different colors. "

The color stimulus achromatic colors produces a color valence which has the same numerical value for all three color coordinates; all three color-sensitive cones are stimulated with the same intensity. The size of the intensity results in the position on the achromatic straight line between black = 0% and white = 100%.

In principle, color can be seen as a free or bound color:

Achromatic colors are important in (color) tone-free black and white photographs . The eye reacts strongly to deviations from neutral gray , so tints are annoying. An example of this is described in the article paper . In artistic photography , the achromatic colors play a special role, as it is abstracted from the color.

The achromatic colors play a role in the CMY system , especially in four-color printing . Here the limitation of the material properties of the three colored pigments for cyan , magenta and yellow is eliminated with the achromatic color black. Instead of mixing the color depth insufficiently, a print run with black pigment is carried out.

The term achromatic is within the scope of test signals of analog television technology used: Unbuntfelder are two areas of an electronic test image for the PAL - color television system . There a faulty color carrier signal is generated electronically , which should be decoded to a gray by a correctly balanced television (more precisely: by its PAL decoder ). Incorrect adjustment leads to color casts in the achromatic fields.