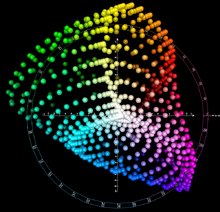 The Lab color space from above (view along the L axis). The spectral colors, i.e. H. Colors of maximum intensity in one or more wavelength ranges form its outer shell.

In analogy to Ewald Hering's counter-color theory, the a-coordinate indicates the color type and color intensity between green and red and the b-coordinate the color type and color intensity between blue and yellow. The larger the positive a and b values ​​and the smaller the negative a and b values, the more intense the color. If a = 0 and b = 0, there is an achromatic hue on the lightness axis. In the usual software implementations, L (lightness) can assume values ​​between 0 and 100 and a and b can be varied between −128 and 127. In the usual 8-bit model per color channel, 16.7 million possible Lab coordinates are achieved in this way. The real Lab color space (our color perception) goes in some areas beyond the mentioned a / b limits and does not reach the mentioned a / b limits in most areas.

The most important properties of the L * a * b * color model include device independence and perception-relatedness, i.e. colors are defined as they are perceived by a normal observer under standard lighting conditions, regardless of how they are generated or how they are reproduced .

The color model is standardized in EN ISO 11664-4 "Colorimetry - Part 4: CIE 1976 L * a * b * Color space". In Germany, this replaces DIN 6174, which was withdrawn in 2011, “Colorimetric determination of color dimensions and color differences in an approximately uniform CIELAB color space”.

The CIELAB color system is based on the CIE-XYZ model of 1931, which combines the three spectral properties (intensity curves in the wavelength range 380-760 nm) of the type of light, the standardized normal observer and the remission properties of the color sample to form the "color valences" (XYZ ) offset against each other. These color valences describe the strength of the intensity of the stimulation of the three color receptor types with the values ​​X, Y and Z. The graphic representation of the tristimulus model of the CIE is also known as the “CIE shoe sole”. It was widely used but was found to be impractical for evaluating color differences.

The color space, which was defined by Richard Sewall Hunter in 1948, is a color space that is also referred to as "Lab". Like CIELAB, it was designed so that color values ​​can be transferred from the CIEXYZ space with simple formulas, but are more uniform in terms of perception than XYZ. Hunter named his coordinates L , a and b . The 1976 CIELAB color space coordinates have been labeled L * , a * and b * to distinguish them from the Hunter coordinates.

In the color model of the International Commission on Illumination , the CIELAB model from 1976, the XYZ coordinates are subjected to a computational transformation in order to normalize areas of similar color differences around each color space coordinate to form circles. The so-called MacAdam ellipses , as areas of equally strong perceived color contrasts in the XYZ space, were irregularly shaped. With this, the Euclidean distances of equivalent differences in color perception should also be represented mathematically better.

Due to the desired equidistance, CIELAB describes our color perception better than the tristimulus model (CIE-XYZ). Due to the inclusion of the perceptual component (the normal observer), it describes the color perception better than RGB , CMYK , HSB or other popular mathematical color models. In contrast to these, it describes all colors, not just the color space segments ( gamuts ) that can be represented in a certain technique . As a mathematical color model, CIELAB is in the public domain and freely usable in every respect.

Coordinate system of the color space

CIELAB color space from the blue side (color angle H = 270). Above is the lightness peak with L = 100, below in the shadow is the color wheel scale.

Each color in the color space is defined by a color location with the Cartesian coordinates {L *, a *, b *}. The a * b * coordinate plane was constructed using the theory of opposing colors . On the a * axis, green and red are opposite, the b * axis runs between blue and yellow. Complementary color tones face each other by 180 °, in their middle (the origin of coordinates a * = 0, b * = 0) is gray.

The a * values ​​range from approx. −170 to +100, the b * values ​​from −100 to +150, whereby the maximum values ​​are only achieved with medium brightness of certain color tones. The CIELAB color body has its greatest expansion in the middle brightness range, but this is different in height and size depending on the color range. Overall, the CIELAB color body is very uneven - see figures.

The CIELAB color model found worldwide distribution in all areas of industrial color practice. Color measuring devices usually show L * a * b * color values, in common design programs (Adobe CC, Corel GS, GIMP and others) you can enter CIELAB color values ​​directly, color differences are usually expressed as the Euclidean distance of the L * a * b * values two colors calculated and communicated ( ΔE ).

In the course of time, the CIE has developed further improved color difference formulas, which better take into account the dependence of a color difference on the color location and the viewing conditions (ΔE 94, ΔE CMC, ΔE 2000). These further arithmetic operations on the L * a * b * color values ​​can be understood as a further distortion of the CIELAB body, which thus describes our color perception even better.

CIELAB as a neutral color instance

In order to avoid color shifts, the original image (left) was converted to Lab mode and the corrections (right) took place exclusively in the L channel.

The L * a * b * color space contains all colors in a device-independent form. It therefore allows the lossless conversion of color information from one color system to another, from one type of device to another.

Image processing software such as Adobe Photoshop use L * a * b * as the reference color system for conversion. Using so-called ICC profiles , in which a table with an L * a * b * target / actual comparison of defined colors is stored, the output of image files can be adapted from one color space to another or from one output device to another. So z. B. prepare image files created in sRGB for a specific RGB monitor and printer or convert them into the CMYK system required for printing, for example as "FOGRA 39" for offset printing.

The CIELAB model offers strong advantages over other mathematical systems or systems that are firmly defined by the manufacturer.

Disadvantages of the model indicate a need for improvement. 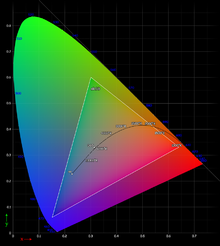 CIE shoe sole with the sRGB gamut it contains

According to Rösch (1928) , the CIE-XYZ color space is a three-dimensional space in which ever smaller horseshoe-shaped structures taper upwards towards the white point. In order to avoid the three-dimensionality of the display, which was not very practical at the time, a simple solution was found for the graphic display: The entire color impression is always set to 100%, regardless of whether the color is light, dark or highly saturated. The individual standard color values ​​(xyz) can then be specified as a proportion of the total color (color valence). This means that all colors can be accommodated in a two-dimensional xy diagram (since z = 1-xy), referred to as a “standard color table” or known as the “CIE shoe sole” (English “horseshoe”). This includes all colors, but the representation of the "shoe sole" is always limited to the respective color-technical possibilities of the output process, the " gamut ". It should therefore be noted that the area outside of the sRGB triangle is not shown saturated enough in the adjacent illustration of the “shoe sole”.

The outer upper curve of the shoe sole represents the spectral colors, which represent the maximum achievable color intensities. They have maximum light in a single wavelength interval and no light in the others. In the lower straight connection, the “purple straight”, maximum intensities of the beginning and end of the spectrum coincide. The close relationship of the spectral color sequence to the CIEL * a * b * color circle can be seen.

Conversion from XYZ to Lab

the third root is replaced by the following relationship:

Conversion from Lab to HLC 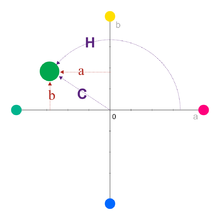 The LCh color space with the coordinates (L * C * h °) corresponds to the Lab color space in which the Cartesian coordinates a * and b * are polar coordinates C * (distance from the origin) and h ° (angle to the a-axis) can be specified. This makes the CIELAB coordinates clearer: h ° can be interpreted as the basic color (hue) and C * as its intensity (chroma, chromacity).

The notation HLC is used for the polar representation , in which the usual order of color selection (hue H - lightness L - saturation C) is expressed. Other alternative abbreviations are LCh or LCH .

The HSB / HSL room used in numerous computer programs differs fundamentally from the HLC room. Although it is also interpreted as “hue, saturation, brightness”, it is less perceptual due to the conversion of the technically based RGB definition .

Conversion from RGB to Lab

Color spaces are complex mathematical bodies and the conversion is system-related accordingly. The RGB color space is always device-specific and Lab is perception-oriented. In addition, the L * a * b * color space comprises a larger color range than any (technically comprehensible) RGB color space. In the case of Lab RGB calculations, it must be clarified how the colors that are outside the (RGB) target color space are projected into them ( gamut mapping ).

A transformation of the present RGB color space into the L * a * b * color space is carried out via the CIE 1931 color space (XYZ coordinates), whereby device independence is initially achieved. As an example, the conversion formulas from sRGB to XYZ follow.

The Lab values ​​are calculated from these XYZ values.

This table shows the extremely possible sRGB and CMYK colors for 36 Hue values ​​in steps of 10 (Hue = 10… 360, see color wheel ). The hex RRGGBB color code used is displayed when the mouse pointer is moved over the "Color sample" field.

Notes on the table "Outermost RGB and CMYK colors"