Delta E , often written as dE or ∆E, is a measure of the perceived color difference, which is "equally spaced" for all colors that occur. The delta stands as a sign of the difference. This allows work that deals with colors to be quantified.

Achieving “same color”, or better “same color valence ”, is particularly difficult with different materials, under different external conditions such as metamerism and because of the individuality of the observer.

In operational practice, it is common practice to specify tolerances in delivery conditions, for example. Applied to colors, this means that a fixed color distance ΔE for every hue should be perceived as the same by most people. For the construction of a color space, perception is quantified in psychophysical experiments using barely perceptible differences. The aim is that areas of color locations whose colors cannot yet be distinguished are spherical in the color space and have the same size regardless of the starting point. Equal spacing was not achieved in the older xy color table (“shoe sole”): David MacAdam identified tolerance ellipses whose direction and size depend on the color location. For the first time, this condition was reasonably met for the L * a * b * color space .

The value of Delta E between the color locations and is calculated as the Euclidean distance according to EN ISO 11664-4 :

The Lab color space is not sufficiently equidistant for practical applications. Differences in the saturated colors are perceived to be less than expected, and blue tones are rated incorrectly. The calculation of the color difference with the Lab model was further developed by the CIE. The modifications to the Euclidean distance take into account, among other things, a better evaluation of the color distance in the blue area and the influence of the ambient brightness, the adaptation to the brightness, in a simple form. The influence of brightness perception (lighter and darker tones) on color perception was also reassessed.

and after CIE94 and CIEDE2000 the most widespread successor formulas are, which, through sometimes very complicated modifications of the CIELAB color difference formula, come closer to a visual equidistance. The application of these models is, however, cumbersome because of the complex calculations, and it took a long time before they could be used more widely. There are software packages for image analysis, color space transformation and the calibration of devices that already use these more up-to-date color difference formulas recommended by the CIE. Since 2014, the ISO / CIE 11664-6 standard has been specified.

The model was developed primarily for the textile industry. It is used in this branch because the specifics of this branch, such as the thread structure of fabric, are taken into account with suitable factors.

The new color space DIN99 is the alternative to the established formulas CIE94 and CIEDE2000 . In its accuracy comparable to both color difference formulas, the calculation of is much easier, the calculation of the color difference is identical to . Euclidean distances are possible with a perception-based design of the color space and the color location thus described differently. Despite its great practical use and potential for cost savings, DIN99 is virtually unknown in the American-dominated scientific community.

The old calculation from LAB coordinates from the 1980s is still widely used, although the shortcomings are well known. The argument that the conversion to better color difference formulas is too expensive does not take into account the follow-up costs due to incorrect color difference evaluation .

Nevertheless, the determination of color distances is inadequate for some purposes, especially since the quality requirements are also increasing. With CAM (Color Appearance Models, models for color appearance) and IAM (Image Appearance Models, models for image appearance), a new, fundamental approach was made that does not go from the calculation of color coordinates to color distances. The new model categories are based on the changed question: “How does a certain color or image appear in the general context of the near and distant surroundings of an image?”. This enables further steps in the direction of perceptual equidistance of the color spaces and the results of correction formulas. The environment of the color observation should be included, such criteria are adaptation , HDR , simultaneous contrast , chromatic adaptation. The aim is to make statements about how a picture (i.e. the interplay of colors) affects the viewer.

The following paragraph is not adequately provided with supporting documents ( e.g. individual evidence ). Information without sufficient evidence could be removed soon. Please help Wikipedia by researching the information and including good evidence.

In the CMC system, the value ΔE = 1 is noted as “color deviation that can still be tolerated”. Since color spaces are perceptual only in the immediate vicinity of the color location despite the improvements achieved, a ΔE = 10 and higher is preferred to be seen as other colors. 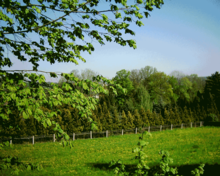 There are several studies on the smallest color difference that can be distinguished from the normal viewer ("usual user"). As a result (somewhat dependent on the aim of the investigation) both ΔE = 1 and ΔE = 2.5 were found. In the case of visual matching, compliance with the adjustment time always plays a role, which is influenced by the observer's practice of color differences. The human perception is trained on color constancy: "Trees and meadows are green". Nevertheless, if you pay enough attention, you can find color nuances from green yellow to blue green.

Such considerations are important for technical systems, since device and system-related deviations from calibrations carried out occur in the course of the entire color management process (whole color reproduction workflow). In the intended quality management of this process, however, there is the requirement that the “usual observer” should not notice production-related color differences. Technically normal deviations are in offset and rotogravure printing with color differences of 2… 4 ΔE, with desktop printers and similar output devices even higher deviations can occur.

The study by Stokes et al. states that errors below 2.5 ∆E are not visible in real recordings that are viewed on CRT monitors.

In order to get usable results when assessing color deviations, the framework conditions must be precisely defined. These include, among other things, illuminance, possibly with tolerance specification, time for brightness and color adaptation to the lighting and to the color or brightness of the near and further surroundings of the viewing field. In the case of visual observations, sampling booths serve to comply with the framework conditions.

In print products distances between original and reproduction need to be specified numerically, which is also the sensation is accepted by an overwhelming number of viewers. The aim is to obtain a numerical value in order to be able to communicate about color distance and subsequently to be able to specify tolerances in contracts for printing and reproduction services.

For the permissible differences between the proof and the expected printed result in the production run, certain values ​​are specified, such as in the print media standard .

A ∆E = 1 corresponds to a small, barely visible difference. A ∆E of 5 is clearly visible. This is approximately a color difference like between a gray with 50% black and a gray with 55% black. The distance of five ΔE units between the delivered print result and the desired color of the print template will normally result in a reprint or a price reduction by the service provider, i.e. an economic loss.

For the practical application of color measurement, the perceptual distance is important in order to achieve a good match with the color experience. However, the color difference can also be used as a measure for other purposes, but the assessed distance should be equivalent in all color types . 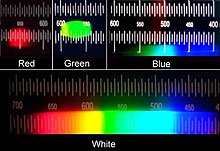 The metamerism index indicates the extent to which the same colors differ conditionally in different lighting. The measure here is Delta E of the examined color with two specified (suitable) types of light.

There are two forms of metamerism for body colors .

Two conditionally identical colors have the same color valence under a certain type of light and cannot be distinguished by the eye, although their absorption spectra are different. This effect is called metamerism . Without metamerism, it would not be possible to display color images on screens with only three narrow-band primary colors ( phosphors ) red, green and blue.

Two absolutely identical colors look the same in all types of light, because the absorption spectrum is identical.

When adjusting the color , the current color difference between the color sample and the standard can be used to determine which recipe adjustments must be made in order to improve the quality of the color sample. Color formulation in this sense has only been possible since (body) colors can be numerically recorded and quantified.

The color difference is used as a benchmark to assess the dispersibility of colored pigments.

Colored products are subject to color changes during their service life, such as yellowing or extreme environmental influences. This property can be tested by artificial aging and can be described using Delta E or statistically evaluated.

The color difference is based on the color valence , that weighting of the color stimulus by the sensitivity functions of the cones.

The sensitivity to color differences, on the other hand, is based directly on the color stimulus , in the form of the electromagnetic spectrum. It describes the wavelength-dependent ability of the eye to differentiate between neighboring types of color . This is greatest in the areas of the cone maxima, at around 450 nm, 500 nm and 600 nm. Differences between neighboring wavelengths of just one nanometer can be perceived here.