The depth of field ends behind the flower, the background is blurred. The flower is in focus.

In photography and other applications of optical devices , distance setting , also focusing or focusing , refers to the adaptation of the camera / lens setting to the object distance (distance between camera , binoculars etc. and subject) so that the subject is depicted in focus.

The closer the subject moves to the camera, the further away the main plane has to be from the film so that the light rays coming from the subject meet on the film at a point on the film plane, i.e. the subject appears sharp in the picture (see lens equation ). To do this, the distance between the lens and the image capture plane (film or image sensor) is usually changed so that it is the same as the image distance . This is why an ordinary lens has a worm gear or some other device that can be used to extend it to set the required distance.

With some lenses, the distance between the lenses is changed at the same time (see floating elements ), and sometimes only one lens group is shifted within the lens, while the distance between the other lenses (especially the front lens) and the film remains the same (see internal focusing ). Front lens / front link focusing is often used with zoom lenses and older prime lenses. Only the foremost lens or a front group of a few lenses is shifted forward, the other lenses are fixed.

When projecting slides or enlarging a negative on photo paper in the darkroom , the scale is usually larger than one, and then it is usually more practical to adjust the distance between the slide or negative and lens for focusing , as this requires a smaller adjustment path. A grain fine adjustment device is often used to assess the exact focus in the photo laboratory . This allows you to focus directly on the greatly enlarged, developed silver halide particles in the film.

For macro shots , it can also be useful to fine-tune the focus by changing the distance between the camera and the subject.

An exception fixed-focus lenses which are adjusted to a fixed distance (usually the hyperfocal distance and deliver) because of its design (short focal length, small lens opening) at a greater distance range (typically 1.5 meters to infinity) sufficiently sharp shooting . They are found in rather simple cameras, but some modern autofocus cameras also offer a “snapshot” setting (fixed distance setting) in order to bypass the slow automatic focusing, which is sometimes unreliable and slow, especially in poor lighting conditions.

Pinhole cameras that do without lenses do not require any distance adjustment . The cameras equipped with lenses are called focusing cameras .

If a sharp point is created on the film by a cone of rays , the tip of which leads from the lens precisely onto the film, blurring occurs if the cone extends too far or not far enough. The tip is then either trimmed or lengthened in the mirror-image projection - in both cases circles of confusion arise in the film plane , the diameters of which are standardized for certain image formats.

As a result, only the plane on which the focus was focused is precisely sharp; the sharpness falls in front of and behind it, to different degrees depending on the image scale and aperture.

Circles of confusion are controlled with the aperture ; small apertures produce smaller diameters and vice versa. A small aperture therefore leads to a larger focus area . In the case of very small apertures, the image is generally less sharp, since the image sharpness is then limited by the appearance of diffraction discs (see also critical aperture ).

In practice, a three-dimensional area of ​​the subject is first moved to the near point of the desired focus area and then to its far point. The final focus setting is set to the middle between the two values ​​of the lens extension. The required aperture for the given light and the corresponding shutter speed and film sensitivity result from this value .

Incorrect focus by hand is the main source of blurring, along with blurring. That is why there have been increasing efforts since the late 1970s to construct cameras with automatic focusing ( autofocus ). If one disregards earlier, commercially unsuccessful attempts such as the Pentax ME F from 1981, autofocus SLR cameras have been established around 1985 . Especially in the upscale price ranges, however, there are still both SLR and viewfinder cameras that do without autofocus or, at least as an alternative, continue to allow manual focusing.

With digital cameras , a raster image is usually available before the recording is registered (see also Live View ).

Since the monitor or the electronic viewfinder of the camera usually have a lower image resolution than the image sensor , it is possible to enlarge sections of the image to be recorded with the so-called software magnifying glass. In this enlarged image, the sharpness of the image section can be assessed much better, which is helpful for manual focusing.

Comparison of a detailed view of the original image (left) with the same image with faded-in focus peaking (right): the sharp contours of the branch are highlighted in yellow

To support manual distance setting, the camera firmware can highlight the sharp contours using focus peaking on the monitor or in the electronic viewfinder. This is particularly useful when taking close-ups or when taking pictures with a restricted depth of field in order to be able to quickly and reliably recognize the actual distance set.

In astrophotography , and observational astronomy in general , one always has to deal with objects that are practically infinitely distant. The term distance setting is not appropriate here; focusing would be better . Although the object distances do not change here, the requirements for a useful method for focusing are particularly high. It is necessary to compensate for manufacturing deviations of the telescope and changes in the environmental conditions (deformation due to gravity, thermal expansion due to temperature changes). High contrasts have a disruptive effect. In addition, there is the fact that stars are not only objects to be observed, but also ideal test objects for the technology used and their state of focus. The Foucault cutting process is a relatively easy-to-implement solution to this problem.

A viewfinder magnifier or a magnifying angle viewfinder can be used as a quick alternative . Here you usually set a star that is properly focused when its image on the screen is particularly sparkling. In the case of a clear lens, attention should be paid to a shift to the cross of lines, which no longer occurs with correct focus.

When setting the desired distance, systematic errors in the position of the focal point can occur in optical images , which in photo technology are often referred to with the terms front focus and back focus (for front focus and rear focus ), borrowed from English .

Experimental determination of the focussing error with an optical image of five blue rods at different object distances (left) with an objective (center) on an image plane (right). When setting the distance, the maximum sharpness should be set on the middle stick.

The focusing is done with some optical devices, such as SLR , by the manual focus on a shim or by the automatic focusing to a separate sensor . The focus error is based on such devices then that a detected when focusing adjustment does not result in that an article in the desired object distance in the image plane sharply imaged is, but closer objects (front focus) or further objects lying (back focus).

Causes can be positional errors when imaging with a lens, such as the field curvature , or tolerances and misalignments, as well as delays in the focusing system of the camera. 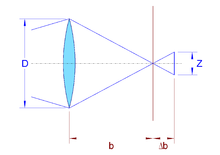 Computational determination of the focusing error via the size of the circle of confusion based on the image-side aperture , the image distance and the adjustment error .

The strength of the focusing error can be determined by the size of the circle of confusion that arises in the image plane due to the difference between the set and optimal image distance:

where is the image-side aperture .

For an image from infinity, the image distance is minimal and at the same time identical to the focal length . In this case, the maximum diameter of the circle of confusion resulting from the focusing error is obtained using the f-number

With such an optical image with a f-number of 2, depending on the inaccuracy of the focusing setting , the diameter of the circle of confusion is shown in the following table:

In this example, circles of confusion with a diameter of 5 micrometers are already obtained with a focusing error of only one hundredth of a millimeter, which, for example, in image sensors with a distance between the image points of this order of magnitude, beyond the aperture error and the diffraction limitation , lead to additional blurring in the digital images .

Changes or differences in temperature can also lead to such focusing problems if the expansion coefficients or temperatures in different components are of different sizes. SLR cameras with plastic housings are often made of polycarbonate with a coefficient of expansion of around 70 millionths per Kelvin. Over a length of 50 millimeters, this corresponds to a thermal expansion of 3.5 micrometers per Kelvin. With a temperature difference of, for example, only 5 Kelvin within the camera housing, the distances from the lens to the image sensor and the autofocus sensor can therefore have a difference of almost 20 micrometers due to thermal effects, which then corresponds to the focusing error. In this example, the resulting circle of confusion would have a diameter of almost 10 micrometers for an image from infinity with a focal length of 50 millimeters and a f-number of 2, which can also lead to blurring in the optical images.