Fig. 1: The optimal aperture as a compromise between aberration blur and diffraction blur ; the useful aperture is not the intersection of the graphs (f (x) = g (x)), but the minimum of the sum of both functions (f '(x) = -g '(x))

Fig. 2: The resolving power of a macro lens (y-axis) as a function of the f-number (x-axis)

A perfectly corrected lens has the greatest resolution when the aperture is open, i.e. with the smallest possible aperture number. The diffraction blur is the smallest here (the red line in Figure 1). With all lenses, however, are aberrations (aberrations) at open aperture is greatest (in Figure 1, the green lines). Aberrations can be carried by hiding the edge rays of the optical dimming reduced. With most lenses, the sum of blurring due to diffraction and aberrations of the lens first decreases when stopping down, and then increases again when stopping down. The minimum of the blurring, i.e. H. the maximum of the resolution is exactly at this point.

The diffraction blur is the same for all lenses for a given focal length, f-number and wavelength and cannot be influenced by the structure of the lens system. It is a property of the captured light. The optics can get the most out of it, but nothing more.

The optimum of the sharpness of detail is the point at which the increase of both functions is identical in terms of amount, but the sign is reversed. Then the sum is minimal. The optimum is not necessarily at the intersection of the two functions - this is almost always shown incorrectly. This point is called the critical aperture.

With fixed lenses this aperture depends on the image circle radius. In the center of the image, many modern lenses achieve the optimum without or with little stop-down, while more stop-down is required at the edge of the image.

In the case of zoom lenses , the critical aperture is still dependent on the set focal length and usually increases continuously after a short drop in the lower focal length range to longer focal lengths.

Calculation on a plano-convex lens

Back focal length x in an optical imaging with a plano-convex, spherical lens with the refractive index n = 1.5 and the radius of curvature at a given height of incidence .

The critical aperture can be illustrated relatively easily using a plano-convex, spherical lens . If one looks at an optical image from infinity with parallel, monochromatic light of the wavelength through such a lens with the radius of curvature and the focal length , the situation shown in the adjacent illustration results.

where the entrance pupil of the optical image and

the f-number are. The size of the diffraction disk is proportional to the f-number.

To calculate the spherical aberration, rays of light can be considered that correspond to the height of incidence

fall parallel to the optical axis on the flat lens surface facing the object. These are not broken when entering the optically denser medium of the lens material with the refractive index , since they strike perpendicularly . On the image side, these rays form the angle to the surface perpendicular of the lens in the lens and outside the lens the angle and are refracted according to Snell's law of refraction . The following applies:

These rays then intersect the optical axis at the angle . The image-side focal distance , measured from the apex of the lens is then obtained as a function of the incidence height by means of the sine theorem to:

For rays close to the axis , this relationship is simplified by forming the limit value with : 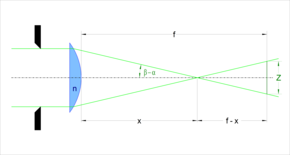 Due to the spherical aberration, the point of intersection of the rays refracted behind the lens with the optical axis moves closer to the lens, the greater the height of incidence . In the focal plane at a distance from the apex of the lens, there is no longer a point-like image, but a circle of confusion with the diameter:

With a refractive index of 1.50 and a radius of curvature of 100 millimeters, the result is a focal length of 200 millimeters.

At a green wavelength of 550 nanometers (nm), the diameter of the diffraction disk is:

The following table gives the entrance pupils and the diameters for the diffraction disk and for the circle of confusion for different f-stops (see diagram on the right): 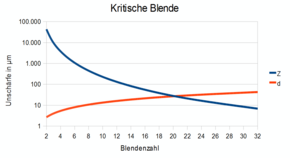 The f-number of the critical aperture in this optical imaging is f / 26.7 (assumption: linear addition). In the example given, this corresponds to an aperture D of 7.5 millimeters. The diameter of the diffraction disk is 36.4 micrometers (µm), the circle of confusion is 11.4 µm. The total is 47.8 µm. The minimum is not at the intersection of the functions (the sum is about 55 µm there).