from Wikipedia, the free encyclopedia
This is the spotted version , flagged on January 13, 2020 . There is 1 pending change that has yet to be viewed.

As diffraction blur is defined as the sharpness reduction of optical images by diffraction of light at aperture of photography, telescope and microscope lenses.

Fig. 1: The intensity of the diffractive light behind a circular aperture

Diffraction is present at every aperture. However, it is generally only annoying with small f-stops (high f-numbers). The cause of the diffraction is the lack of competition between alternative paths of light propagation . This gives the light more freedom not to spread in a straight line.

The cause of diffraction is not the presence of edges and lens mounts, but the lack of light behind them.

The representation, which is often found in popular scientific literature, that interfaces are the cause of diffraction, would lead to completely different properties of diffraction.

For a given focal length , the depth of field increases with the closing of the aperture. For some motifs, especially in macro photography , you need the greatest possible depth of field in order to keep the object fully focused. This is achieved through strong stopping down , i.e. by choosing a small aperture. Then, however, the effects of diffraction blur appear stronger, which again compensate for the possible gain in depth of field. In many cases, a compromise between depth of field and diffraction blur is therefore necessary. This compromise is also called the beneficial aperture or optimal aperture .

The critical aperture is the aperture setting that enables the highest resolution of a picture. It is numerically larger for the edge of a sensor (because of the stronger aberrations there) than for the center of the sensor.

It is a compromise between diffraction blur and aberration blur . The depth of field is not taken into account. For a motif with depth, the appropriate aperture is therefore the optimal aperture setting.

The insertion of a particular radial graduated filter ( Apodisationselement ) in the aperture stop of the beam path suppressed diffraction rings around the pixels, thus improving the contrast of an image at the expense of the resolution power . 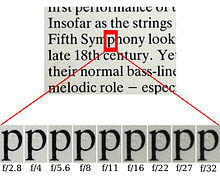 The angular resolution of the diffraction blur depends on the effective aperture of the lens used and not on its f-number . However, the required angular resolution increases with the focal length , so that the f-number is the decisive factor for an image of a certain sharpness.

The smaller the opening width or the larger the f-number, the larger the spot created by the diffraction blur. For a maximum permissible size of this spot, this results in a maximum useful f-number. The maximum permissible size of this spot can either be determined by the size of the light-sensitive area (for example a certain fraction of the image diagonal ) or by the resolution of the light-sensitive area (for semiconductor sensors the pixel size and for film material the resolution of the film).

Cameras with very small sensors (which essentially only became useful through semiconductor sensors) often have a very high resolution. The maximum useful f-number for an image sensor with eight million pixels and an image diagonal of six millimeters is therefore very low and is in the range of less than 2. For large format cameras, f-numbers of 64 are sometimes still useful.

Series of photographs of an object with different apertures in full format . As the f-number increases, the focus visibly decreases in the center. The edges are sharper up to f / 32 (useful aperture KB)