General von Alten on the battlefield of Waterloo

Carl von Alten was the only Hanoverian officer who led both the King's German Legion (Königlich Deutsche Legion) and a British association in the coalition wars against Napoleon .

By defending the “ La Haye Sainte ” estate , von Alten played a key role in the victory of the Allies at Waterloo - and thus also in the implementation of the electorate of Braunschweig-Lüneburg to the Kingdom of Hanover , which was decided at the Congress of Vienna .

His parents were August Eberhard von Alten (1722–1789) and his wife Henriette, née Freiin von Vincke-Ostenwalde . His father was lord of Wilkenburg and Sundern , head captain in Burgwedel and court and chancellery. He had four brothers, including the Hanoverian Lieutenant General Viktor von Alten .

Coat of arms and base plate in the tower of the Neustädter Hof- und Stadtkirche St. Johannis , where the count's bones were transferred in 1958.

Carl von Alten was born as the ninth child of the family in the Wilkenburg town hall in the city of Hanover and was baptized with the name Carl August in the Neustädter Hof- und Stadtkirche St. Johannis .

At the age of twelve he came to an educational institute for pages , which later became the Georgianum in Calenberger Neustadt . He began his military career in 1781 as an ensign in the footguard of the Hanoverian army and became a lieutenant in 1785 and joined the King's German Legion in England in 1803. As a lieutenant colonel , he was given command of the 1st light battalion in the Hanoverian Corps; Together with the 2nd Corps this formed the Rifle Brigade. He fought near Hanover (1805), Copenhagen (1807) and on Rügen , in Sweden and on the Pyrenees Peninsula . On October 23, 1808, as a colonel , Alten was appointed commander of the Rifle Brigade. After General Craufurds fell in a storm during the siege of Ciudad Rodrigo , Wellington gave him by order of May 2, 1812 the command of the electoral Hanoverian light division of the Royal German Legion.

Before the battle of Waterloo, in which he took part as commander of the 3rd light division (King's German Legion), his soldiers defended the farm "La Haye Sainte" on June 18, 1815 , directly in front of the main line of the English with the Duke of Wellington , against the main force of Napoleon's army. By holding this court, Wellington had time to wait "until night falls or the Prussians come." The battle, which had actually almost been lost, then turned - when the Prussians actually came.

Carl von Alten was badly wounded in the battle. For his services he was appointed general and by royal order of July 21, 1815 raised to the Hanoverian count status. He then took over command of the reorganization of the Hanoverian army and was appointed field marshal . From 1832 Minister of War , in 1833 he also took over the Foreign Ministry , became Inspector General of the Army and President of the Court Martial .

He was honored by the British Crown on January 2, 1815 as Knight Commander of the Order of Bath and in 1820 as Knight Grand Cross of the same order.

From 1824 to 1834 the military acted as commander of the General Staff Academy.

Traces of life in Hanover

Statue of the count looking towards his former Palais Friederikenschlösschen . Steel engraving around 1858 by Johann Poppel after a drawing by Wilhelm Kretschmer

Carl von Alten comes from the Lower Saxon noble family of the von Alten, which can be traced back to 1182, with their headquarters in Ahlten near Lehrte . Another property (1816–1961) on the eastern ascent to Lindener Berg - the Von-Alten-Garten - was converted into a public park after being sold to the City of Hanover.

After 1817, the royal Hanover city ​​planner and classicist court architect Georg Ludwig Friedrich Laves completed the Friederikenschlösschen as a new palace for von Alten , who had been raised to the rank of Count , opposite the Leineschloss , and on the edge of a larger former parade and parade ground: this was redesigned after Laves' hippodrome ( 1825) and unveiling of the Waterloo Column (1832) renamed Waterlooplatz (1834). 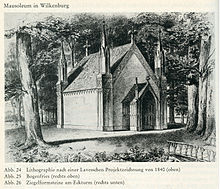 Ruins of the mausoleum in the Sundern nature reserve , 2012

After von Alten's death in 1842, Laves designed the Count Carl von Alten mausoleum near Wilkenburg , which is now in the Sundern nature reserve . It was prefabricated by Hanover's second important architect, Conrad Wilhelm Hase : The building, the bricks of which were partly modeled and signed by Hase himself and which Hase described as the first beginning of “ Hanoverian brick architecture ”, fell into ruin over time . Today it is considered to be the first neo-Gothic brick building in northern Germany . The mausoleum has been dismantled since the 1950s, partly through theft. In 2012 an association to save the mausoleum was founded.

The Hanoverian sculptor Heinrich Kümmel created the bronze statue of the count in front of the baroque Royal Archives (today: Lower Saxony State Archives ) on Waterlooplatz in 1849 . The statue looked towards the Friederikenschlößchen as the palace of the count. The reconstruction of the former castle was discussed against the background of a second city destruction after the Second World War . Although the palace survived the air raids on Hanover , it fell victim to demolition in 1966 - for a planned but never built state chancellery. Instead of the former palace in the overall historical complex, there is now a lawn here (next to the Waterloo beer garden).

Members of the von Alten family still live in and around Hanover today.

Foreign Minister of the Kingdom of Hanover

War Minister of the Kingdom of Hanover