The state archive, headquartered in Hanover, maintains a total of eight departments, two of them in Hanover as well as in Aurich , Bückeburg , Oldenburg , Osnabrück , Stade and Wolfenbüttel . A branch is the Clausthal mountain archive in Clausthal-Zellerfeld .

The listed building of the Lower Saxony State Archives in the Calenberger Neustadt in Hanover is also the seat of the Historical Commission for Lower Saxony and Bremen .

The Lower Saxony State Archive was founded on January 1, 2005 as a higher state authority responsible for the entire area of Lower Saxony . It was created through the merger of the seven state archives of Lower Saxony (Aurich, Bückeburg, Hanover, Oldenburg, Osnabrück, Stade, Wolfenbüttel), which until then had been independent authorities. These initially retained their traditional name as "State Archives", since the introduction of new rules of procedure in October 2013 they have been referred to as "locations". With the entry into force of further new rules of procedure on May 15, 2019, the term "location" was replaced by "department"; At the same time, the previous Hanover location was split up into the Hanover department and the Central Services department.

The authority has 190 employees (as of 2009). The legal basis for the fulfillment of tasks and the use of the State Archives is the Lower Saxony Archives Act (NArchG) of May 25, 1993. In certain individual cases, the Federal Archives Act (BArchG) also applies. In addition, there are other administrative regulations that regulate use and fees.

The state archive permanently stores the archivable documents of the state of Lower Saxony and its legal and functional predecessors. The authority is also responsible for the archival evaluation of the documents in the offices of the State of Lower Saxony, which are no longer needed in ongoing business operations. The state archive is also responsible for the old records from federal agencies located in Lower Saxony. Further essential tasks of the archive are the safekeeping, indexing and utilization, restoration , preservation and evaluation of the separated documents.

The departments of the State Archives with their branch offices together accommodate more than 90 kilometers of shelves of archival material ( files , official books , documents , maps , plans , photographs , posters , films and digital documents) from the 9th to the 21st century. These include historical documents from princes, dukes, counts and bishops. In archive is always to unikate tradition.

The Hanover department stores 31 kilometers of shelves for files, including around 40,000 documents, 14,000 photographs and 67,000 cards. The library comprises around 85,000 volumes. The stock extends over large areas of today's Lower Saxony. This includes areas of the Kingdom of Hanover and the Electorate of Hanover as well as the area between the Weser, Elbe and Harz Mountains.

The Aurich department is responsible for the state authorities and courts and their legal and functional predecessors in the historical territory of East Frisia . East Frisia, which was made an imperial county in 1464, fell to Prussia in 1744 after its ancestral government house died out , became part of the Kingdom of Hanover in 1815 and returned to Prussia in 1866. The spatial responsibility of the department has always extended to this area, which until 1978 corresponded to the administrative district of Aurich , which was dissolved in the administrative and territorial reform at the time , and which today is to be defined by the municipal authorities of the city of Emden and the districts of Aurich , Leer and Wittmund .

The Bückeburg department is responsible for the state authorities and courts and their legal and functional predecessors in the Schaumburg district . In 1977, essential parts of the old Grafschaft Schaumburg , which was divided in 1647, were reunited in this district, each of which had had its own history in the meantime as a county / principality, free state, state and district of Schaumburg-Lippe or as the Hessian province and district of Grafschaft Schaumburg.

In the Bückeburg department, on behalf of the federal government, the backup filming of the most important archive material was carried out for all archives in the states of Lower Saxony and Bremen as part of the protection of cultural property . In addition, the mass restoration of archives from the State Archives was concentrated here. In Bückeburg, the Bückeburg process for the mass deacidification of individual sheets of archived material was developed in the late 1980s and is now used throughout Germany and Europe. Since October 1, 2013, the central workshop of the Lower Saxony State Archives located in Bückeburg was assigned to the Hanover location; it is now part of the Central Services department based in Hanover.

The listed building of the Lower Saxony State Archives in Hanover was erected between 1713 and 1721 on the basis of a preliminary design by Louis Remy de la Fosse on the outskirts of Calenberger Neustadt . It was the first building in Germany that was built exclusively for archive and library purposes. Archival material from the principalities of Calenberg and Lüneburg , which were combined in 1705, was originally stored there. The court library was also housed in the building. When the Kingdom of Hanover was dissolved in Prussia , the archive became the Prussian State Archive of Hanover in 1871. The air raids on Hanover during the Second World War in 1943 caused great damage to the building. Archival material was also lost due to the flooding of the Leine in 1946. In 1946 the archive became the main state archive for the State of Lower Saxony, and in 2005 it became the headquarters of the newly founded Lower Saxony State Archive. There is a bronze statue of Carl von Alten in front of the building entrance . 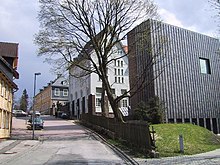 The Hanover department of the Lower Saxony State Archives is responsible for the highest state authorities and the central specialist authorities throughout Lower Saxony. This also includes all other offices of the state administration and courts located in the former administrative district of Hanover within the limits of 1978 (with the exception of the district of Schaumburg ). Before the regional district of the main state archive was considerably larger: it comprised the three old administrative districts of Hanover , Hildesheim and Lüneburg , which were made up of the Guelph principalities of Calenberg (with Göttingen and Grubenhagen ) and Lüneburg as well as the prince-bishopric (Hochstift) Hildesheim and / or the Landdrostei districts of Hanover , Hildesheim and Lüneburg as well as the Clausthal Mining Authority of the Kingdom of Hanover had emerged. All written records from the state administration and judiciary for these areas are kept in the state archive. Among the renowned Archivalen as include deposit the archives of the former royal house of Guelph , the files of the German law firm in London as well as the original document of the Act of Settlement .

The archival records of the state authorities and courts in the administrative districts of Lüneburg and Braunschweig , which have also been dissolved in the meantime, belong to the Stade and Wolfenbüttel departments.

The magazine in Pattensen , completed in 1972, belongs to the Hanover department , where it can also be used.

The Central Services Department of the State Archives is also located in Hanover. The Central Services department is responsible for looking after all fundamental archiving issues and as a service provider for all departments for all budgetary and personnel matters, all IT use including the construction and operation of a digital archive, public relations work, insofar as this is not perceived regionally and the controlling.

The Central Services department also takes on the management and technical responsibility for the central workshop, which in Bückeburg and Pattensen is responsible for the restoration, deacidification (internal and external), the creation of protective media and large-format reproductions for users and, on behalf of the federal government, the backup film for carries out all archives of the state of Lower Saxony.

The Central Services department includes the central workshop of the Lower Saxony State Archives , located in Bückeburg and Pattensen, where the mass restoration of archives from the State Archives is concentrated. At the end of the 1980s, the Bückeburg State Archives developed the Bückeburg process for the mass deacidification of individual sheets of archive material, which is now used not only in the Central Workshop, but throughout Germany and Europe. In the central workshop, the backup filming of the most important archive material is carried out on behalf of the federal government for all archives in the states of Lower Saxony and Bremen as part of the protection of cultural property . The backup films are stored in the Barbarastollen .

A branch of the Hanover location is the Clausthal mountain archive , which organizationally belongs to the State Office for Mining, Energy and Geology (LBEG). The archive material from the Harz Mining Administration, which was created in the former Upper Mining Authority in Clausthal or in its predecessor authorities since the 16th century and which also performed general administrative tasks for the Harz region until the late 19th century, is located in the mining archive . There are also files from fiscal mining operations that were handed over to the Clausthal mining authority after they were closed or sold. 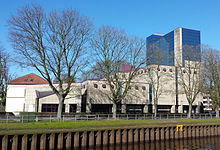 The Osnabrück department is responsible for the state authorities and courts and their legal and functional predecessors in the city of Osnabrück as well as in the districts of Osnabrück , Emsland and Grafschaft Bentheim . From 1885 to 1978 this area corresponds to the administrative district and from 1823 to 1885 the Landdrosteibezirk Osnabrück . This can essentially be traced back to the four old districts of the Prince Diocese (Hochstift) Osnabrück , Grafschaft Bentheim , Niedergrafschaft Lingen and Niederstift Münster (= Arenberg / Meppen Office ).

The Stade department is responsible for the state authorities and courts and their legal and functional predecessors in the area of ​​the new government district of Lüneburg formed in 1978 , in which the old government district of Stade and almost the entire government district of Lüneburg had merged. Even after the dissolution of all of Lower Saxony's administrative districts at the end of 2004, the area of ​​responsibility of this location continued to include the districts of Celle , Cuxhaven , Harburg , Lüchow-Dannenberg , Lüneburg , Osterholz , Rotenburg (Wümme) , Heidekreis , Stade , Uelzen and Verden . Up until the administrative and territorial reform of February 1, 1978, the Stade State Archives were only responsible for the Stade administrative district, whose boundaries extended beyond the Stade Landdrostei district to the secular duchies or the medieval religious principalities (Hochstifte) Bremen and Verden as well as the 1731 Have land Hadeln acquired by the Electorate of Hanover returned . The archival documents from the old district of Lüneburg, which were closed until 1978, continue to be sent to the Hanover location responsible for them.

The Wolfenbüttel department is also the seat of the Lower Saxony Economic Archives Foundation in Braunschweig .