The title of this article is ambiguous. Further meanings are listed under Barbarastollen (disambiguation) .

The entrance to the Barbarastollen (2009)

Protective symbol for cultural property under special protection in the tunnel

The Barbarastollen , also known as the Oberriedstollen or Oberrieder Stollen , is a disused supply gallery - overburden tunnels for silver and ores - of the former mine in Hörnergrund at the foot of the Schauinsland near Oberried near Freiburg im Breisgau . It is the central salvage location of the Federal Republic of Germany for the storage of photographically archived documents of great national or cultural historical importance - in black and white on 35 millimeter polyester thin film and since 2010 also on color film. It is the largest archive for long-term archiving in Europe . The tunnel is named after St. Barbara of Nicomedia , the patron saint of miners.

The Barbarastollen was excavated in 1903, with a planned length of around 3500 m it was supposed to create a connection to the Roggenbach shaft of the Schauinsland pit . It was supposed to bring material and ore from the shaft to a train station planned in Hintertal. It was carved into the mountain up to a length of 700 m, but was neither completed nor used as a transport tunnel. The last visit to the tunnel took place in October 1954.

From 1972 to 1974 renovations took place gradually. In 1975 the first microfilms were stored, previously the archive films were stored at the individual filming locations.

Since April 24, 1978, the Barbarastollen has been the only object in Germany to be subject to special protection under the rules of the Hague Convention for the Protection of Cultural Property in the Event of Armed Conflict and is therefore entered in the International Register of Objects under Special Protection at UNESCO in Paris . The special status of this place is indicated by the three-fold blue and white cultural property protection symbol at the tunnel entrance.

Container 2165 with the billionth intake, the Basic Law

The location and function of the bunker were only officially announced after the east-west relaxation.

On October 3, 2016 ( Day of German Unity ), container 2165 was stored in a special storage facility; it contains the Basic Law as the billionth recording of the archiving project. In the presence of the President of the Federal Office for Civil Protection and Disaster Aid (BBK), Christoph Unger , the Basic Law of the Federal Republic of Germany and the complete set of the associated files were stored. This includes the original documents of the first version with the signatures of the members of the Parliamentary Council chaired by Konrad Adenauer . This set of documents was filmed by the Landesarchiv Berlin and comprises around 30,000 pages.

The 2001 Federal Office of Administration as a central office for civil defense risen Federal Office of Civil Defense was his lecture Cultural Property in charge from the beginning of the tunnel. Since it was founded in 2004, the Federal Office for Civil Protection and Disaster Aid (BBK), based in Bonn , has been responsible, among other things, for measures to secure cultural property. It continues to use the tunnel as a safe place to keep the archival material from Germany copied on film rolls . 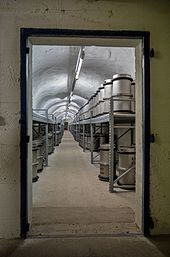 One of the two storage rooms, room B

The main tunnel is 680 m long, but the archive material is not archived there, but in two storage tunnels. These two storage tunnels are at 340 m and 390 m from the mouth hole and have a minimum cover of 200 m of rock over the tunnels in the storage area. The tunnel system is completely made of granite and gneiss . The storage tunnels are each 50 m long, 3 m high and 3.40 m wide. They are carved into the mountain, lined with formwork concrete and secured with standard pressure doors. The doors are fitted with high-quality mechanical safe locks so that they can be opened and closed without electricity. The rooms are not air-conditioned , but because of their location they have a temperature of 10 ° C and a relative humidity of 75%. Shortly after the access to the second storage tunnel, the main tunnel is barred. The stretch behind it is in its original condition, after 350 m the old mine is sealed with a concrete plug.

In the storage tunnels there are more than 2000 hermetically sealed stainless steel containers ( V2A ) (as of October 2016), which are stored on two-story shelves.

Two types of containers are used: The older, smaller containers are welded. Since rust had formed on these over time, they were moved to the more modern containers. These containers are deep-drawn and without welds. For filling, the containers are stored for four weeks at 10 ° C and 35% humidity before they are closed. This procedure assumes a durability of the film material of at least 500 years without loss of information. All regular archive material has now (as of October 3, 2016) been relocated to the newer type 2 containers, which means that space has been created again in the archive tunnel. The tunnel is secured against unauthorized access through extensive, mutually monitoring alarm systems as well as multiple personnel access controls.

As a result of the fire in the Duchess Anna Amalia Library in Weimar, a new archiving technology called "ArchiveLaser" was developed at the Fraunhofer Institute for Physical Measurement Technology in Freiburg as part of the InnoNet program ARCHE, which will also be used to store color films in the future can. For this purpose, the long-term stable microfilm ILFOCHROME® MICROGRAPHIC is exposed with a laser. This film is 250 times less sensitive than normal photo films and has a resolution with which 25 A4 pages can be exposed on an image of 45 × 32 mm. The pixel size is 3 micrometers; thus the number of pixels is 10,000 × 15,000. In contrast to slide film, this film consists of pure azo dyes without silver and, like black and white archive films, has a polyester carrier. These color films have been stored since 2010.

Goods to be stored

The way in the tunnel to the storage location

The undeveloped part behind the archive area

Water collecting basin at the end of the tunnel, approx. 20 l / s collect, these are diverted via the pipeline to a local hydroelectric power station

Copies of the handwritten works of the great German composers and writers as well as of historical documents and contracts are stored in the Barbarastollen. The documents kept include, for example:

In 2003, filming of library holdings began. Around 8.2 million meters of microfilm archive material (around 240 million recordings) from the former German Democratic Republic (GDR) from a comparable project in Ferch, southwest of Berlin , was copied onto polyester microfilm and stored in the tunnel.

6396 films with more than 10 million recordings from the collapsed historical archive of the city of Cologne are stored in the tunnel. However, the filming in the Cologne archive did not advance until the 19th century, so more recent data such as Heinrich Böll's private archive can only be reconstructed from the rubble.

On the 50th anniversary of the Hague Convention on July 21, 2004, 50 donated works of art by 50 artists were declared German cultural assets and stored in the gallery. These were created especially for this purpose and were not shown to anyone before they were stored. The curator of this action subductive measures ZBO - SdM 052004 was the action artist Adalbert Hoesle , among the artists were Andreas Gursky , Jörg Immendorff , Jonathan Meese , Karin Sander and Christoph Schlingensief . The closed barrels were shown before they were stored in the Bonn art gallery. The barrels may only be opened in 3504. These are the only storage objects that are not microfilms.

In May 2009, on the 55th anniversary of the Hague Convention, another 50 containers were stored. The total volume is thus around 29,400 kilometers of microfilms with over 900,000,000 recordings. On this occasion, the locations of the individual containers were also re-documented and cataloged alphanumerically with a new system, which on the one hand can be expanded and also contains information on the respective storage tunnel. This enables the test containers in particular to be found more quickly, which are subject to regular checks.

Storage in the tunnels takes place four times a year. An extension through the creation of further storage tunnels is possible, but each extension will take about 5 to 7 years.