The Hoesch AG was a major steel and mining company with operations in the Ruhr area and in the Siegerland . It was founded by Leopold Hoesch in Dortmund in 1871 as Eisen- und Stahlwerk Hoesch AG and was taken over in 1992 by the then Krupp Group (now ThyssenKrupp ).

View of the Westfalenhütte around 1896

The former Hoesch headquarters in Dortmund

The Hoesch family was long before the foundation of the Dortmund company with various metal-processing companies in the Eifel established and operational works in Monschau , Lendersdorf in Düren (since 1819) and Eschweiler (since 1847).

In 1871 Leopold Hoesch founded together with his sons Wilhelm (1845–1923) and Albert Hoesch (1847–1898) as well as his cousins Viktor (1824–1888) and Eberhard Hoesch (1827–1907) a new ironworks in Dortmund in the then province of Westphalia and steelworks in order to take advantage of the locational advantages of the up-and-coming Ruhr area (rich coal deposits, railroad for ore transport).

The new company survived the start-up crisis and in 1899 took over the Westfalia colliery with the associated Kaiserstuhl coking plant . During the Weimar Republic , Hoesch AG was one of the few heavy industry companies that was not integrated into the United Steel Works . In 1930 Hoesch merged with the Cologne-Neu-Essen mining association , and in 1966 with the Dortmund-Hörder Hüttenunion .

After the Nazis came to power in 1933, Hoesch served as an armaments company for the manufacture of tank casings of the Panther and Tiger II types, tank ammunition, gun barrels and armor plates. During the Second World War, the company made extensive use of forced labor. In December 1944, over a third of the workers at the Hoesch iron and steel works were forced laborers.

In 1965 the Hoesch Group achieved sales of 2.358 billion DM and employed 48,600 people. At that time, a fifth of the Dortmund population on wages and salaries was working for " Karl Hoesch ". This term was a lovingly intended declaration of respect among Hoeschians and, as pars pro toto, stands for everything that has to do with the Hoesch company.

On September 2, 1969, the September strike began , a successful wildcat strike .

At the height of the steel crisis , Hoesch merged with the Dutch Koninklijke Hoogovens to form the Estel Group in 1972 on the initiative of Fritz Harders . However, the cooperation was ended again in 1982 at the instigation of the then Hoesch CEO Detlev Rohwedder , who was convinced that the corporate cultures did not match and that the Dutch steel managers were disadvantaging the interests of the Dortmund operations. For the successful reorganization of the Hoesch Group, Rohwedder was named "Manager of the Year" in 1983. 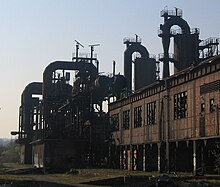 The Hoesch Group included the Dortmund Westfalenhütte , the Hüttenwerke Phönix AG for mining and smelting operations and the Hermannshütte in Hörde , the Hörder Bergwerks- und Hütten-Verein as well as the Hüttenwerk Union in the west of Dortmund city center. The spatial distribution or distance between the blast furnace site in Hörde and the steelworks and rolling mills made expensive transport necessary and was a key cost factor for the company. Hoesch AG also included Hüttenwerke Siegerland AG / Hoesch Siegerlandwerke AG with plants in Kreuztal-Ferndorf , Kreuztal-Eichen and Wissen , and several companies in the field of trade and services, such as the software company mbp , Hoesch Handel and the insurance broker Industriewerte Versicherungskontor as well as a large number of important mechanical engineering companies such as Pohlig Heckel Bleichert ( Weserhütte ), Hoesch Hohenlimburg AG , the former Orenstein & Koppel group , Hoesch Maschinenfabrik Deutschland AG , Hoesch Rothe Erde Schmiedag AG and others.

Erich Honecker and other members of the party and state leadership of the GDR with the chairman of the Hoesch AG Board of Management Detlev Rohwedder (r) and Hans Otto Bräutigam (2nd from right), head of the permanent representation of the FRG in the GDR , 1985

Gasometer on Phönix-West with Hoesch lettering

Hörder Castle after the renovation in 2011

After the hostile takeover by Krupp and its subsequent merger with Thyssen , most of the former Hoesch group companies now belong to thyssenkrupp AG .

The liquid phase, the production of raw steel iron and steel, was closed in 2001. Today over 1,300 people are still employed on the Westfalenhütte site. Hot strip from the Duisburg smelting works is cold-rolled, annealed and electrolytically galvanized or hot-dip galvanized here.

The products mainly go to the auto industry. The ThyssenKrupp Group's most modern hot-dip galvanizing line is operated in Dortmund. The Dortmund Surface Center, one of the world's leading research and development centers for the surface finishing of flat steel, is also located on the site.

Some parts of the thyssenkrupp group still bear the name of the Hoesch group today:

The former company-owned housing company Hoesch-Wohnungsgesellschaft operated under the name Wohnbau Westfalen and owned a large number of former company apartments in the Ruhr area and Siegerland . In autumn 2007, Wohnbau Westfalen became part of the Evonik group of companies . In 2011, the shareholders' meeting of Evonik Immobilien GmbH decided to change the company's name to Vivawest .

If you approach the city of Dortmund from the south, you will immediately notice the Hoesch Gasometer on the Phoenix-West site with the listed Hoesch logo. The gasometer is one of the few structures that still remain on the Hoesch site.

Since the closure of steel production on Phoenix-Ost, large parts of the production facilities have been dismantled by a Chinese company and brought to China to be rebuilt and produced there. The most modern coking plant in the world, the Kaiserstuhl coking plant , was also dismantled on the Westfalenhütte site and put back into operation in China.

A residential and recreational area with the central Phoenix Lake was built on the Phoenix-Ost site.

The Hoesch Museum in the historic porter's house in the Westfalenhütte is a reminder of the company history of the Hoesch Group in Dortmund . The museum opened on October 23, 2005. In Düren , the art museum Leopold-Hoesch-Museum , donated by the Düren industrialist family Hoesch, commemorates the former founder of Hoesch AG.