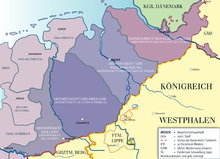 Map of the Hanseatic departments with the department Lippe 1812 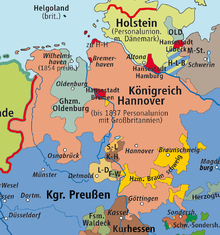 The Grafschaft Bentheim is a historic county whose headquarters were at Bentheim Castle in what is now Bad Bentheim in Lower Saxony . The ruling counts, later the royal house of Bentheim belonged to the high nobility .

The history of the region, which later became the county of Bentheim, can be traced back to 1050: At that time, place names of the Bentheimer Land were first mentioned in a document. Bentheim Castle was mentioned as early as 1020 as the property of Count Otto von Northeim . Schüttorf is the oldest town in the county of Bentheim. The place was mentioned for the first time in 1154 under the name curtis Scutthorp as the property of the then counts, who also owned Bentheim. The town charter was granted to Schüttorf on November 6, 1295 by Count Egbert zu Bentheim. Within a radius of 30 km from Schüttorf there were only two other cities: Horstmar and Oldenzaal , which made the young city an important market and trading center and soon a member of the Hanseatic League . The county of Bentheim as such was first mentioned in 1228, before that it cannot be said with certainty whether it already had the status of a county or was just a "rulership" consisting of several dominions .

In the 14th century, Counts Otto, Christian and Bernhard von Bentheim were at times cathedral provosts of the Münster cathedral chapter . In 1421 Eberwin I von Götterswyk inherited Bentheim and in 1425 also became lord of Ottenstein , and in 1451 lord of Steinfurt . Even under his descendants, the gentlemen of Bentheim split into the Bentheim-Steinfurt and Bentheim line. After further lordships were added through inheritance ( Gemen , Tecklenburg ), further divisions of the estate into the lines Bentheim-Tecklenburg , Bentheim-Limburg and Bentheim-Alpen took place later . The Grafschaft Bentheim belonged as a direct imperial county to the Lower Rhine-Westphalian Circle of the Holy Roman Empire of the German Nation (1500-1806).

In the 17th century, with the creation of the settlement Piccardie (today Alte Piccardie, municipality of Osterwald ) by Johan Picardt, the bog colonization in the county of Bentheim began.

In the course of recent history, the affiliation of the Grafschaft Bentheim has often changed. First, the free imperial county was pledged in 1753 under Count Friedrich Karl to the King of Great Britain and Electors of Braunschweig and Lüneburg for thirty years. In 1757, during the Seven Years' War between England and France, Count Friedrich Karl occupied his former territory with his French regiment and allowed himself to be returned to the county. However, as early as 1758, Hanoverian troops occupied Bentheim and forced the occupiers to withdraw. On December 4, 1781, Friedrich Karl canceled the pledge agreement, but failed to raise the required amount. The government in Hanover then declared that the contract would be automatically extended for another thirty years on January 1, 1783.

In 1804, during the French era , the county was handed over to Count Ludwig Wilhelm von Bentheim-Steinfurt as the heir of Friedrich Karl. In 1806 Napoleon Bonaparte deprived the Counts of all rights through the Rhine Confederation Act ; Until 1811 Bentheim belonged to the Ems département of the Grand Duchy of Berg in the Confederation of the Rhine he founded . With the annexation of the Kingdom of Holland by France in 1810, the affiliation changed again: With effect from January 1, 1811, the county belonged temporarily to one part (Neuenhaus district) to the Ems-Occidental department and the other part (Bentheim as part of the Steinfurt district) to the department of Bouches-de-l'Yssel . From April 27, 1811, the county was part of the new Lippe Department , which was formed as part of the Hanseatic Department after the other French annexations .

With the Prussian district reform in 1885 , the new district of Grafschaft Bentheim was founded in the administrative district of Osnabrück , which had emerged from the two previous offices of Bentheim and Neuenhaus.

During the 19th century, numerous Grafschafter emigrated to the United States and settled, for example, in the region around Holland (Michigan) .

In terms of postal history, there are close links between the Grafschaft Bentheim and the postal history of Steinfurt due to the relationship with the Steinfurt rulership .

Anton Friedrich Büsching's Description of the County of Bentheim (1771)

The royal Prussian senior consistorial councilor and director of the Berlin grammar school Anton Friedrich Büsching (1724–1793) dealt in his New Earth Description "the Kingdom of Bohemia as well as the Austrian , Burgundian , Westphalian, Chur-Rhenish ( Kurrheinischer Reichskreis ) and Upper Rhine district".

The theologian and geographer devoted a short chapter to the Westphalian county of Bentheim. Büsching mentions the location of the county there - surrounded "by the Dutch province of Ober-Yssel ( Overijssel ) and the Drenthe countryside , and by the Münster bishopric ", its extension: "10 miles long and 2.3 to 4 miles wide", that fertile land crossed by rivers, its hardworking inhabitants, their trade in yarn, wool, linen , honey, cattle, stones, wood and other goods, most of which were exported to Holland.

Büsching listed five offices: Schüttorf , Northorn ( Nordhorn ), Emblicheim ( Emlichheim ), Nienhus or Neuenhaus and Ulsen ( Uelsen ). He also lists the three towns in the upper and lower counties: Schüttorf, Northorn, Nienhus and the town of Bentheim. All parishes and villages of that time, the “ Herrlichkeit Emblicheim”, aristocratic possessions, the Frenswegen monastery and the aristocratic free-world women's monastery Wietmarschen , which was previously a “ Benedictine male abbey”, then a Benedictine monastery are also mentioned. Büsching also notes who had a seat and vote in the state parliaments . The theologian goes on to briefly discuss the religious conditions in the county. The history of the Counts of Bentheim is given a somewhat more detailed account.

The Bentheim Castle is an early medieval hilltop castle . The beginnings of the fortress, which was built on the remains of a Germanic people's castle , cannot be precisely proven historically; The mighty castle of the Counts of Bentheim was first mentioned in a document around 1050 in the second Werden register . The castle stands on a large rock made of Bentheim sandstone high above the city; this mountain, also known as the Bentheim ridge , is the last branch of the Teutoburg Forest .

Lords and Counts of Bentheim

Family coat of arms of the Counts of Bentheim

Lords and Counts of Bentheim

Distribution of inheritance to his sons Arnold (Steinfurt) and Bernhard (Bentheim)

His daughter inherits Bentheim and marries Arnold III. from Bentheim-Steinfurt.

After the death of Count Arnold in 1606, the property was divided among his sons according to his will of 1590. The first-born Adolf von Bentheim, who died in 1623, was given the imperial counties of Tecklenburg and the rule of Rheda, while his later brothers Arnold Jobst and Wilhelm Heinrich took over the reigns of the imperial counties of Bentheim and Steinfurt and Wevelinghoven. The younger sons of Count Arnold were compensated from the inheritance of their mother Magdalena von Neuenahr-Alpen, which had fallen to Bentheim in 1592. Count Konrad Gumprecht received the county of Limburg and Friedrich Ludolf the rule of the Alps. The Limburg and Alps lines quickly died out and fell back to Steinfurt.

Houses in Bentheim and Steinfurt (until 1918)

Territories of the Counties of Bentheim and Steinfurt (Blaeu 1645)

Distribution of the inheritance to his son Ernst (Steinfurt) and his nephew Arnold Moritz Wilhelm (Bentheim, see below)

In 1819 Bentheim fell from Hanover to the Bentheim-Steinfurt line.

Heads of the House of Bentheim and Steinfurt (from 1918):

Knight seats of the county of Bentheim suitable for state parliament

The now almost extinct domestic pig breed Bentheimer Landschwein was bred in the county of Bentheim .