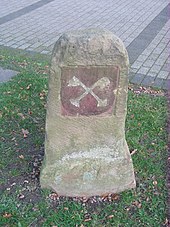 The Hochstift Minden (also called Stift Minden , Fürstbistum Minden or imprecisely simply as the Diocese of Minden ) was a spiritual territory of the Holy Roman Empire of the German Nation . The Minden bishopric was part of the Lower Rhine-Westphalian Empire .

The bishopric emerged in the 12th century as the secular domain of the Minden prince-bishops , whose diocese was much larger. In 1648 the bishopric was secularized and fell under the name " Principality of Minden " to Brandenburg-Prussia .

The bishop's court was located next to the Minden Cathedral in Minden an der Weser, now in North Rhine-Westphalia . The seat of the administration was the Petershagen Castle , located downstream from the Weser . The area of ​​the Hochstift Minden, like the successor territory of the Principality of Minden, comprised the areas of today 's Minden-Lübbecke district and a small part of today 's Herford district for the longest period of its existence .

The diocese of Minden was founded by Charlemagne in 799 after the end of the Saxon wars and was under the church province of Cologne . The rise and heyday of the diocese fell in the time of the Saxon and Salian emperors (919–1125).

In the high Middle Ages, the bishopric was established as an imperial principality , the scope of which was significantly smaller than the ecclesiastical diocese. After the fall of Henry the Lion in 1180, the Minden bishop's seat was given ducal power over its territory.

The bishop ruled the bishopric with the participation of the estates: the Minden cathedral chapter , the ministry , the noble free and the city of Minden . Between approx. 1250 and 1350, offices were set up that were administered by episcopal officials / Drosten at the castles Rahden , Reineberg , Schalksburg , Petershagen and Schlüsselburg . The offices were temporarily assigned to ministerials of the bishopric or, more often, pledged to financially powerful state ministers.

From 1259 to 1277 Hamelin was also owned by the bishopric. Until 1397 the bailiwick rights were held by the nobles from the mountains , after which the territory was reduced as a result of territorial power struggles to what is now the Minden-Lübbecke district . The capital Minden became independent in the 13th century.

On his trip to Westphalia, the papal legate Nikolaus von Kues had to deal with the grievances in the diocese of Minden.

In the 16th century, under Bishop Franz von Braunschweig-Wolfenbüttel, the Reformation began in the monastery , especially after Nikolaus Krage gave the city of Minden a Protestant church order in 1530 . In 1535, Bishop Franz von Waldeck , the Minden Cathedral Chapter and the city of Minden signed a treaty that guaranteed unhindered Catholic worship in Minden Cathedral. Since Franz von Waldeck (bishop from 1530 to 1553) there have always been men at the head of the diocese and the prince-bishopric who tolerated or even openly promoted Lutheran doctrine so that it could quickly prevail. The delicate confessional balance was regulated in 1555 by the Peace of Augsburg , which gave the sovereigns the right to determine the denomination of their subjects. In addition to this, the Declaratio Ferdinandea assured the Protestant subjects in the Catholic spiritual territories the exercise of their denomination. In addition, the Augsburg Religious Peace established a guarantee of existence for Catholic monasteries and foundations, which secured the St. Mauritius monastery and the St. Johannis monastery in Evangelical Minden.

By decree of Bishop Heinrich Julius von Braunschweig-Wolfenbüttel, all clergymen in the prince-bishopric (except at the Mindener Dom) were obliged to the Protestant denomination.

During the Thirty Years' War , Minden was occupied by Catholic imperial troops in 1625. The reigning bishop Franz Wilhelm von Wartenberg from 1630 tried to enforce the counter-reformation as sovereign , but was driven out of the city of Minden by the war events, which was occupied by Swedish Protestant troops in 1634. With the Peace of Westphalia in 1648, the bishopric fell as a secularized principality of Minden to Brandenburg-Prussia as compensation for the loss of entitlement to Western Pomerania that Sweden received.