The principality of Calenberg was a Welf partial principality in the Duchy of Braunschweig-Lüneburg that was established in the 15th century . It was considered the heartland of the later Electorate of Hanover and was therefore also referred to as the "heartland Hanover". 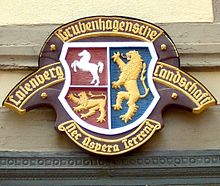 When Erich I chose the Principality of Calenberg in an inheritance division in 1495, he described it as "the land between Leine and Deister ". However, this geographical name was never entirely correct. In fact, the principality extended west of the Leine from Schulenburg to Neustadt / Rübenberge in the north and thus much further north than the foothills of the Deister. To the southwest the territory extended to Hameln on the Weser and thus far beyond the Deister.

Even if not formally a free imperial city , the city ​​of Hanover was largely independent of the Guelph rule in the late Middle Ages. Only when Georg von Calenberg, who was successful as a general in the Thirty Years' War , chose the city as his residence in 1636, Hanover could also be seen as part of the Principality of Calenberg.

In today's parlance, the name Calenberger Land is mostly only used for the area between Hanover and the Deister.

Beginnings and founding of Calenberg Castle

Remains of Calenberg Castle , here the battery tower at the main entrance

Originally the territory belonged to the Duchy of Saxony . Once over the Guelph Henry the Lion in the 1180 imperial ban was imposed, he lost his title as Duke of Saxony and Bavaria. Heinrich's grandson Otto the child was able to move up to the prince status again in the course of the Staufer-Welf reconciliation in 1235 and received the allodial possession of the family in the area between Lüneburg and Braunschweig as an independent Duchy of Braunschweig-Lüneburg , which was claimed in the battles . In the area west of Hanover, however, the Guelphs had little allodial ownership and so the area between the Guelph House and the bishops of Hildesheim and Minden was disputed. It was largely ruled by count families such as the Count of Wölpe in the northwest, the Count of Hallermund in the southwest and the Count of Roden in the west and in Hanover.

In administrative terms, this area was initially called Vogtei Lauenrode, after Lauenrode Castle at the gates of the city of Hanover, from which the Guelphs ruled the country. When the Lüneburg line of the Welfs died out, the Lüneburg War of Succession (1371–88) occurred during which Lauenrode Castle was stormed and destroyed by the citizens of Hanover. The bailiwick has now been relocated and came to Calenberg Castle.

The Guelph dukes did not inherit their territories according to the birthright and so there were numerous Guelph inheritance divisions in the late Middle Ages, which led to a large fragmentation of Guelph territory. The Bailiwick of Calenberg came to the Wolfenbüttel line of the Welfen in 1400. In 1408 and 1409 these were also able to acquire the County of Everstein and the Lordship of Homburg after their masters died out. These were added to the Bailiwick of Calenberg. In another Guelph inheritance - the ninth according to Gudrun Pischke's count - the Brunswick dukes Wilhelm the Elder shared . Ä. and Heinrich , who had ruled together in Wolfenbüttel until then, reopened the area in 1432. While Heinrich received the Wolfenbüttler Land, Wilhelm was resigned to the newly formed Principality of Calenberg. The rule that Wilhelm had received at that time still had no name. It consisted of the rights between Deister and Leine, which formerly belonged to the Principality of Lüneburg , as well as the former County of Wölpe , the Reign of Hallermunt and the Reigns of Homburg and Everstein.

Since the Guelph princes all carried the title Duke of Braunschweig and Lüneburg and the areas they ruled were part of the duchy of Braunschweig-Lüneburg , the countries they ruled were named after the most important castle or city. Wilhelm often lived at Calenberg Castle and had the territory administered from here. This is probably why the name of the Principality of Calenberg came about during this time.

In 1442 and finally in 1463 Wilhelm succeeded in gaining control of the Principality of Göttingen . Even if the merger with Calenberg was actually only coincidental at first, it still lasted. In order to distinguish the two areas, which are spatially separated by the foothills of the low mountain range in the Leinetal, the northern part of Calenberg was now mostly called "Unterwald", while the Göttingen region was called "Oberwald".

In 1473 Wilhelm inherited the Principality of Wolfenbüttel from his sonless brother, but passed control of Calenberg to his sons Wilhelm the Elder. J. and Friedrich , called "the restless" or "Turbulentus", from.

After the death of Wilhelm I in 1482, both sons took over the reign together. In a contract dated August 1, 1483, however, they shared the rights of use (so-called mutsching ). The younger son Friedrich the restless received the rights of use for Calenberg and Göttingen; his brother Wilhelm II received the right to use Wolfenbüttel. Wilhelm deposed his brother Friedrich in 1484/85 and declared him insane. The reasons for the dismissal are controversial; possibly Friedrich threatened to become a danger for the Guelph rule in Calenberg and Göttingen through his participation in many armed conflicts. Wilhelm II succeeded - even if only for a short time - in reuniting the entire territory of the principalities of Calenberg, Braunschweig-Göttingen and Braunschweig-Wolfenbüttel . After Friedrich's death in 1495, Wilhelm divided the country again and left the principality of Braunschweig-Wolfenbüttel to his older son Heinrich .

Under Erich I, Elisabeth and Erich II. 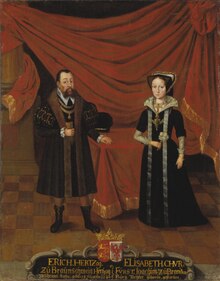 Erich I with his second wife Elisabeth around 1530

The younger son Erich I received Calenberg and Göttingen and thus founded the Calenberg line of the House of Braunschweig-Lüneburg . For the territory that was now created, the name Calenberg was increasingly used for both parts of the country. For the time under Erich I and his son Erich II , the name Principality of Calenberg-Göttingen is also often used. The principality still had its own estates and councils for both parts of the country. In Neustadt am Rübenberge the firm for under forest and was Munden the built Oberwald, which also led to their files on the establishment of the residence and the construction of nationalistic fortresses or castles in the two cities.

Under Erich I, Calenberg Castle was expanded into a mighty fortress. Another strongly fortified castle that he had built was the Erichsburg near Dassel , which was built from 1527 . In the Hildesheim collegiate feud in 1519 he was initially defeated militarily in the battle of Soltau. Diplomatically, however, he was able to triumph over Emperor Charles V through an arbitration award and add large parts of the Hildesheim monastery to his rule.

Erich I was hostile to the emerging Reformation . But his second wife, Elisabeth von Brandenburg , whom he married in 1525, switched to the new apprenticeship in 1535 and promoted it at the court, which at that time resided in the Welfenschloss Münden . After Erich's death in 1540, she initially took over the government for her underage son Erich II and, together with the state superintendent Antonius Corvinus appointed by her, pushed through the Reformation in the principality. Erich II, however, converted to Catholicism in 1547, although he was raised Protestant by his mother. However, he did not succeed in reversing the Reformation in the principality. His power in the principality was already very weak. He himself mostly stayed abroad as a mercenary leader and was financially dependent on the cities. In 1553 he had to pay financial aid from his cities by allowing Protestant sermons. From 1574 he had Neustadt am Rübenberge expanded as a city fortress and built Landestrost Castle as a renaissance castle, integrated into a bastionary fortress based on the Italian model.

In 1582, when the Counts of Hoya died out, most of the county and in 1585 also Diepholz fell to Calenberg.

After Erich's death in 1584, Calenberg-Göttingen was ruled again by the Wolfenbüttel line of the Guelphs. During the Thirty Years' War the brother of Duke Friedrich Ulrichs , the "great" Christian , brought the war into the country. After the Danish troops under King Christian IV , who was then commander-in-chief of the Lower Saxon Empire , were defeated by the league general Tilly in the battle of Lutter , Tilly occupied the entire principality in 1626. Only the cities of Braunschweig and Hanover could not be captured.

When Duke Friedrich Ulrich died childless in 1634, the Wolfenbüttel line of the Middle House of Braunschweig died out with him. Duke August the Elder (1568–1636), Bishop of Ratzeburg from the Middle House of Lüneburg, received the Principality of Calenberg-Göttingen in 1635. After his death in 1636 his younger brother Georg took over the rule. He was successful as a general on the Swedish side and he also succeeded in recapturing the country and especially the cities for the Guelphs by 1637. He initially ruled from occupied Hildesheim, but then moved his residence to Hanover , which he had expanded as a fortress. After his death in 1641, a separate peace was hastily concluded with the emperor, which had to be bought with the return of the Hildesheim territories acquired in the Hildesheim collegiate feud. Georg's sons, Christian Ludwig , Georg Wilhelm , Johann Friedrich and Ernst August ruled the Principality of Calenberg-Göttingen one after the other.

Promotion to the electorate 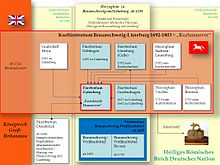 In 1665 the principality of Grubenhagen , whose line had already died out in 1596 and for which the Wolfenbüttel and Lüneburg lines had contested long before the Imperial Court of Justice, finally fell to the Calenberg line. Georg's youngest son, Ernst August , who ruled from 1679, continued the successful policy of his father and his brothers. In 1689 Sachsen-Lauenburg was inherited by the Calenbergers. Ernst August switched to the imperial side and, contrary to his father's regulations, introduced the birthright. After a long struggle, Ernst August was awarded the ninth electoral title in 1692 for his service to the emperor . He was officially called Elector of Braunschweig-Lüneburg ; his government was called "Electoral Brunswick Lüneburg Government" . In 1705 the Principality of Lüneburg fell to by inheritance , whereby the line, also known as the " House of Hanover ", was able to unite all Guelph possessions with the exception of the Principality of Braunschweig-Wolfenbüttels.

See also the main article in the Electorate of Braunschweig-Lüneburg

The principality of Calenberg was initially a rather insignificant territory. The Guelph rule developed late here. For 140 years, until Georg von Calenberg took office in 1636, Calenberg had almost only seen governments that hardly cared about the country. In the late Middle Ages and the Renaissance , the cultural centers were outside of Calenberg in the cities of Braunschweig , Hildesheim and Lüneburg . New centers formed at the residences in Wolfenbüttel and Celle . The city of Hanover was not ruled by the Calenberg princes until 1636. The other cities were insignificant.

Only after the reign of Georg von Calenberg and the elevation to the electorate and later kingdom could the former principality of Calenberg become the nucleus of the later state of Lower Saxony .

Industrialization began in the liberal French era . The industrialist Johann Egestorff (1772–1834) took advantage of the economic opportunity between 1803 and 1813 and was able to acquire limestone quarries on the Lindener Berg , west of Hanover. To burn the lime, he had coal mined in the Deister . His son Georg Egestorff founded an iron foundry and machine factory (later transferred to HANOMAG ). The Calenberg village of Linden has now developed into an industrial city.