Christian (II.) Von Braunschweig-Wolfenbüttel (* September 20, 1599 in Gröningen an der Bode; † June 16, 1626 in Wolfenbüttel Castle ), nominally Duke of Braunschweig and Lüneburg and administrator of the Diocese of Halberstadt, also Christian the Younger , who " Tolle Christian ”, the“ Wild Duke ”or“ Toller Halberstädter ”, is one of the most famous Guelph commanders in the battle against the House of Habsburg (Emperor Ferdinand II , King Philip IV of Spain ) and the Catholic League in the Thirty Years' War.

As the third son of the Lutheran Duke Heinrich Julius of Braunschweig-Wolfenbüttel and his second wife Elisabeth of Denmark , he was born in Halberstadt Monastery of Gröningen and was appointed secular administrator of the Halberstadt diocese at the age of 17 , but was not recognized by the emperor or by the Roman Catholic Church.

His equestrian and military inclination led him to serve as Rittmeister under Prince Moritz of Orange (Dutch: Prins Maurits) in 1620 . In 1621, Duke Christian set up a mercenary army of around 10,000 men on behalf of the Elector Palatine Count Friedrich V of the Palatinate , the expelled and ostracized "Winter King" of Bohemia, whose maintenance was not guaranteed. He took Count Ernst von Mansfeld as a model , who had been doing the same in the Upper Palatinate for several months and thus also violated current imperial law. Duke Christian and his troops plundered the Liesborn , Paderborn and Münster monasteries , setting up his headquarters in fortified Lippstadt . From the cities that he did not visit, he demanded contributions , i.e. contributions to the maintenance of his army (in money or goods), e.g. B. the Pfaffenfeindtaler . He informed the authorities, towns and villages that were on his route by threatening letters of his imminent arrival; these letters were singed on all four corners, with threats like "blood, blood!" Such methods were initially used for intimidation to ensure the maintenance of his mercenary army. Some - like the cities of Soest and Werl - therefore preferred compulsory contributions to looting. Geseke was the only city that he could not conquer, which is why the so-called praise procession still takes place there every year. In Paderborn he stole the shrine of St. Liborius with the relics and had the Christiansthaler minted from the gold of these church treasures , a coin with his portrait and the inscription “God's friend - the priest's enemy”. A first attempt to move to the Main and further into the Rhine Palatinate was repulsed by Bavarian league troops under Count Anholt (autumn 1621). 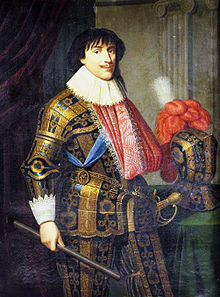 In the battle for the Rhine Palatinate , Duke Christian had to fight the crossing over the Main on June 20, 1622 in the battle of Höchst against the far superior forces of Tilly and Córdoba, which he succeeded with high losses. Shortly afterwards he was able to unite the rest of his mercenary army with the army of the experienced mercenary general Ernst von Mansfeld . After leaving the Palatinate Electoral Palatinate (July), Mansfeld and Christian von Braunschweig undertook a joint campaign to end the siege of the Dutch mountains op Zoom by the Spanish General Spinola . On the way from the Meuse through the southern (Habsburg) Netherlands on August 29, they encountered a Spanish army under Gonzalo Fernández de Córdoba near Fleurus , who, however, could not prevent them from moving north. The two mercenary leaders managed to fight their way through to Prince Moritz of Orange with the remnants of their troops (September) and finally to help him liberate the besieged Bergen-op-Zoom (October).

In the Battle of Fleurus (1622) Duke Christian suffered a gunshot wound to his left arm, so that his left forearm had to be amputated a few days later in Breda . The operation was carried out in the army camp with a drum roll, while he is said to have announced to the other side that he still had the other hand to fight ( altera restat ). Later he allegedly had a prosthesis made in Holland . It was speculated that such a prosthesis in the form of an iron hand was the Braunschweig hand kept in the Herzog Anton Ulrich Museum . However, the duke may also or only use a wooden arm or forearm prosthesis.

In the winter of 1622/23 the duke resumed his war activities in the empire. In the war year 1623, Duke Christian, after renouncing his Halberstadt bishopric, wanted to break through from the Lower Saxon imperial circle to Dutch territory, but on August 6, 1623 at Stadtlohn he was put to a fight by the Ligist General Tilly . In this battle at Stadtlohn , the Guelph's army was almost completely destroyed; all campaign plans became obsolete. Duke Christian himself was able to save himself to the Netherlands with a few soldiers.

As a relative of the English royal family Stuart - and regardless of the severity of his defeat by Stadtwages - Duke Christian was accepted into the Order of the Garter in London (December 31, 1624). During the following months he prepared for a new campaign, which was to take place in English pay and under the command of Mansfeld, and collected cavalry near Calais , from where he shipped his troops to the Netherlands (island of Walcheren) in ships with no small losses. Shortly before the city of Breda , besieged by the Spaniards , whose relief had failed (May 1625), had to capitulate (June 1625), the States General relocated the Mansfeld-Braunschweig mercenary army to the Lower Rhine, where it lost considerable strength due to a lack of supplies. In autumn 1625 Duke Christian separated from Mansfeld, with whom he had never had a good relationship.

At the beginning of 1626, after the imperial forces in northern Germany had strengthened again, his brother Friedrich Ulrich handed him control of the Principality of Braunschweig-Wolfenbüttel , and Christian immediately raised new troops to support the Danish King Christian IV , his uncle. But before the Duke of Guelph could play a bigger role in the campaign under Danish command, he fell seriously ill and died two weeks later with a high fever on June 16, 1626 in Wolfenbüttel Castle . The exact cause of his death has not been clarified, but a late consequence of his severe injury in 1622, from which he had never fully recovered, is considered likely.

Duke Christian, who was in command of army troops at the age of 22, was not, despite all his talent, the successful general that his clients (Electoral Palatinate, England, Denmark) had wished for. Given his youth, he may be viewed as a military natural; as a cavalry leader in battle, he showed determination and courage to the point of daring. In terms of economic, social and military history, he belongs to the category of private war entrepreneurs , in his case: of imperial prince descent who performed extensive military services for other princes (warlords).

In addition to the military, he was also trained in the classical arts, but still an uncontrolled young man, completely devoted to the craft of war and passionate about his opposition to everything imperial. His Landau dinner speech (June 1622), in which a (presumably) drunk Duke Christian, in the presence of his employer, the Count Palatine Winter King, was infamous, especially about his father-in-law, King James I of England .

Contemporaries gave the young Guelph Duke the nickname "great Halberstadt" as early as 1622, which was by no means just admiring, but rather as "the crazy / gone wild", but also as the "daredevil / unorthodox" administrator of Halberstadt in the sense of the military operations at the time understand is.

Although he was not one of the most successful generals of the Thirty Years War, he undoubtedly stood out for his character. An important motivation to support the Count Palatine Friedrich V was his deep admiration for his wife, Elisabeth Stuart , incidentally a cousin of the Guelph. He gave his troops flags a. a. with the motto: Pour Dieu et pour Elle ( For God and for you , probably for Elisabeth Stuart), as if his devastating campaigns (1621–1626) were supposed to represent a knightly service of love.

Some authors also provide a picture of Duke Christian wearing the glove of his cousin Elisabeth as a helmet ornament . However, this has not been proven.

In the years 1834 to 1838 the poet Annette von Droste-Hülshoff processed the defeat of Christian von Braunschweig in the verse epic Die Schlacht im Loener Bruch 1623, which she published in her collection of poems in 1838.