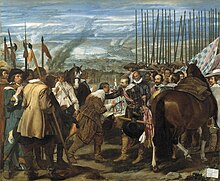 Velázquez - The surrender of Breda

Spinola initially had no significant military experience - he had acquired the most important knowledge of his profession from books. Nevertheless, he became the most successful Spanish general on the Dutch theater of war at the beginning of the 17th century. When asked about the most important military leader, his opponent Prince Moritz von Orange is said to have replied: "Spinola is the second".

Spinola, from the old Ghibelline family, has distinguished himself several times in the service of King Philip III since 1599 . from Spain and supported with a corps of 9,000 men of old Italian and Spanish troops, in the style of the earlier Condottieri , the Archduke Albrecht VII of Austria in the siege of Ostend (1601-1604).

Thereupon appointed lieutenant general and commander of all Spanish troops fighting in the Netherlands, he faced Prince Moritz of Orange in Flanders from 1605 ; but neither could gain any substantial advantage. Sent from Spain in 1620 to support Emperor Ferdinand II against the Protestant imperial princes , in August he invaded the Electoral Palatinate at the head of 23,000 men and conquered many cities, but was summoned to the Netherlands in 1621 , where he returned fought against Moritz.

Weakened by the dismissal of the repeatedly mutinous Italian troops, he was only able to continue the war to a limited extent despite the conquest of Jülich in 1622. It was not until the summer of 1624 that Spinola was ready to begin the siege of Breda ; finally he forced the defenders to surrender the city on June 2, 1625.

Ailing since then, he had to resign from command. He only appeared once again in Italy in 1629 , where he drove the French out of Montferrat in the dispute over the inheritance of the Marquis of Mantua and locked them in the Villa del Casale . He died on September 25, 1630 in Castelnuovo Scrivia.