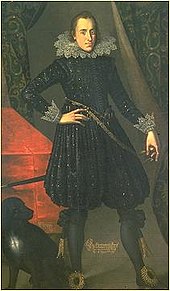 Friedrich Ulrich received a scientific education that included studies at the universities in Tübingen and Helmstedt and was completed with a cavalier tour to England and France. When he died, his father left him with a considerable debt of 1.2 million talers. Friedrich Ulrich married Anna Sophia (1598–1659), daughter of Elector Johann Sigismund von Brandenburg . The marriage turned unhappy and remained childless.

Shortly after taking office, there were disputes with the city of Braunschweig, which did not want to pay the duke's considerable monetary claims. Friedrich Ulrich therefore besieged the city in 1615 for three months without success. Because of his unwillingness to govern, Friedrich Ulrich signed every document presented to him unchecked, the rise of Anton von der Streithorst , who was appointed governor in 1616 and headed the regiment of the disloyal Drosten . But Friedrich Ulrich's mother and her brother, the Danish King Christian IV , also had a significant influence on government affairs. During the Thirty Years War he tried to remain neutral at first. He later allowed himself to be involved in a campaign with the imperial army, which ended in defeat. The country, one of the worst hit in Germany, suffered hard because it was at times completely in the hands of the Soldateska.

He was accepted as a member of the Fruitful Society under the company name The Permanent .

Friedrich Ulrich died at the age of 43 as a result of a double broken thigh and was buried in Wolfenbüttel's Marienkirche .

Friedrich Ulrich is considered to be one of the most incompetent and ineffectual rulers of the House of Braunschweig. A pawn in the hands of his councilors, he was essentially only interested in table pleasures. He lost most of his land and mediated himself through his extensive donations to his councilors. With his death, the Wolfenbüttel line of the House of Braunschweig expired, and Wolfenbüttel fell back to the Braunschweig main line under August the Younger .