August II in the library; Engraving by Conrad Buno , around 1650 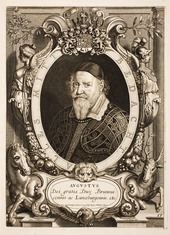 August the Younger (born April 10, 1579 in Dannenberg , Principality of Lüneburg ; † September 17, 1666 in Wolfenbüttel ) Duke of Braunschweig-Lüneburg , Prince of Braunschweig-Wolfenbüttel , ruled from 1635 until his death in 1666 and was considered one of the most learned princes its time.

Due to his immense interest in manuscripts and books, he developed an intensive collecting activity and thus created the largest library in Europe for its time , the Herzog August Library in Wolfenbüttel .

August was born as the seventh and last child of Ursula von Sachsen-Lauenburg (1552 / 53–1620) and Duke Heinrich von Dannenberg (1533–1598) from the Celle line of the Welfen dynasty and, due to this position, had practically no prospect of reign . Early on, however, he impressed his teachers with his intellectual abilities, so they urged his parents to let the fifteen-year-old study.

So he finally studied in Rostock , Tübingen and Strasbourg , where he learned Latin , Greek , Italian , French and English . After his studies he traveled to Europe for several years, visiting Italy , France , Holland and England .

At the age of 25 he settled in Hitzacker on the Elbe , where he built a modest farm with a maximum of 30 servants . The rule included an Elbe fishing village with around 500 inhabitants, which did not pose a particular challenge for the talented young man. Although of robust nature and enthusiastic rider, he decided against a career in the military . He also did not seek a position in the clergy , although there he could easily have pursued his passion for science and books.

Instead he spent 30 years in Hitzacker, which he converted into a small model state, and collected books on a modest budget. An early source even reports of the first library building in Hitzacker, although profane library buildings north of the Alps were unusual even in large residences at that time. He also brought his rule through the turmoil of the Thirty Years' War with diplomatic skill .

During this time he also excelled as a witch hunter . During his reign, 40 people were executed as witches.

Monument to Duke August the Younger on the market square in Wolfenbüttel, erected in 1904

Despite a bad starting position, August showed ambitions to take over the throne and was able to prevail against six other family members in a highly complicated succession dispute. For this purpose he even got himself the backing of Emperor Ferdinand II from Vienna .

In the succession treaty of December 14, 1635, August was officially heir to the throne at the age of 56. Due to the ongoing raging war, however, he had to wait nine more years in Braunschweig at Dankwarderode Castle before he could finally move into his badly damaged residence in Wolfenbüttel in 1644. He already brought 55 boxes of books with a weight of 470 quintals, the basis of his Bibliotheca Augusta .

As in Hitzacker, he carried out extensive reforms in Wolfenbüttel ; So he first set about building a functioning church, school and judicial system and systematically recorded all war damage in all communities in his principality in order to prepare his financial planning for the reconstruction. Considerable income from mining in the Harz Mountains and his comparatively modest court management enabled the country to recover quickly.

One of his most important government measures was the planning and execution of a craft suburb west of the Wolfenbüttel castle fortress, the Wolfenbüttler Auguststadt .

August was very committed to the development of the German language as a literary language . In contrast to many educated people of his time, he was proud to have written his works in his mother tongue . He was also interested in secret doctrines and alchemy and for many years was in correspondence with Johann Valentin Andreae , the presumed founder of the Rosicrucians .

In February 1632, Duke August met Prince Ludwig I of Anhalt-Köthen at the Halberstadt district assembly . He took the meeting as an opportunity to include the prince in the fruitful society , a loose association of noble and middle-class educated people with the aim of developing German into a uniform high-level language in spelling and grammar .

As a member of the Fruit Bringing Society, Duke August was given the name Liberator . As currency, he was the stamp and as an emblem Gamanderle assigned (sheep herb, Teucrium chamaedrys L.). In Köthener society book Herzog August can be found under No. 227th. There the rhyme law was also noted, with which he thanked for the admission:

Gamanderley frees you from the blow, helps you avoid
The niggle makes it hurt
some suffer
Liberatingly, I say on the beat: It's got to be
to be sought in common in front of Vnserm body calm,
But the soul is subject to vices,
But virtue has been seen here in the village,
She makes lords of servants, she speaks the princes freely
Of so much and so long practiced tyranny.

As part of these efforts, he hired the young scholar Justus Georg Schottelius (1612–1676) as a research assistant and prince educator , who is considered by many to be the father of German grammar today. Through his achievements, Wolfenbüttel became the center of German language research , a meeting place for writers and scientists . August's library, which was considered the largest in Europe at the time, certainly contributed significantly to this. At the end of the 17th century, for the first time in Germany, more books were printed in German than in Latin .

Under the pseudonym Gustavus Selenus he published in 1616 the first German chess textbook , The chess and Bobby Fischer ( in four distinct books with special fleiss thorough and orderly abgefasset ) and in 1624 the 500-page book Cryptomenytices et Cryptographiae libri IX , the in its time as a standard work for cryptology and cryptography .

Four years after he took office, the Peace of Westphalia was concluded in 1648 , and August did not wage war until his death in 1666. In contrast, he developed Wolfenbüttel - true to his motto "Everything with care" - into an intellectual and cultural center that radiated across Europe . His library, which as prince and duke he systematically expanded with the means available to him, became the largest collection of manuscripts and printed books on the continent.

Today the Herzog August Library is an important library and research facility with a special focus on the late Middle Ages and the early modern period .

Librarians and directors of the Herzog August Library