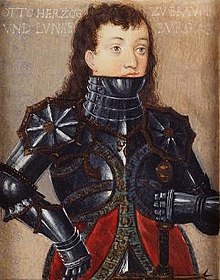 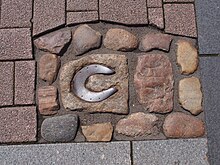 Horseshoes in the pavement in Celle: Otto is said to have had an accident at this point

Otto was the son of Friedrich II and Magdalene von Brandenburg . After his brother died childless, Otto took over the reign in the Principality of Lüneburg in 1464 . Otto's work was determined by the monastic reform efforts of his time, which he tried to implement in the Lüneburg monasteries. So he penetrated the Wienhausen monastery , stole numerous art treasures which, in Otto's opinion, ran counter to the ideal of monastic simplicity, and sent the abbess to an already reformed monastery for re-education . Legend has it that Otto died in a tournament on the Celler Stechbahn. A horseshoe in the pavement marks the spot where Duke Otto the Magnanimous is said to have had an accident in 1471.

Grave slab in the St. Michaelis Church in Lüneburg

Otto V was buried in the Church of St. Michaelis in Lüneburg .