The Lindener Berg and Linden, 1805

The Lindener Berg is 89  m above sea level. NN high elevation in the Hanoverian districts Linden-Mitte and Linden-Süd , which rises about 35 meters above the surrounding urban area.

View from Lindener Berg towards Hanover, in the foreground the Lindener Turm; Engraving by Caspar Merian after Conrad Buno , around 1654

The Lindener Turm , a former watchtower , today an excursion restaurant

The Linden Tower was built on the Lindener Berg in 1392 as a watch tower . It was part of the Hanoverian Landwehr and is now the oldest structure in Linden that has been preserved. In the Middle Ages, the access roads could be monitored from the unwooded hilltop .

During the Thirty Years' War , the general Tilly pitched his camp on October 25, 1625 on the Lindener Berg. From here he sent a trumpeter to Hanover as a negotiator to request admission to the city - but the Hanoverian magistrate refused. Then there was a small skirmish at the Ihmebrücke , after which the Tilly's troops first moved on to the Ricklinger Holz. 14 days later the Tilly army was again encamped on the mountain, but then the occupiers withdrew towards the Weser - without having conquered Hanover. The Lindener population but - until 1641 the Lindener mountain was repeatedly the scene of armed events - was by arson and looting to the Westphalian peace destitute in 1648th

After the end of the Thirty Years' War, Duke Georg Wilhelm ordered that the tower on Lindener Berg be converted into a Dutch windmill with a rotating cap. The technology for this came from Holland. As early as 1651, the farmers of Linden and the surrounding villages were obliged to have their grain ground there: The facility followed the Calenberg official mill as a new compulsory mill. In 1856 the mill was finally privatized before being taken out of service in 1927.

As a further defensive measure , Prince Friedrich August von Braunschweig had a Sternschanze raised around the mill in 1761 . In both the Thirty and Seven Years' War , enemy armies attacked the royal residence over the Lindener Berg. After the Wars of Liberation against Napoleon, the Lindener Berg should have become the site of a Waterloo monument, but this proposal by Georg LF Laves was not implemented. The monument was finally erected on Waterloo Square . In 1825, however, Laves was able to implement a different project: On behalf of the entrepreneur Johann Egestorff , he designed the “Berghaus” in 1825, an excursion restaurant for Hanoverian citizens. The restaurant existed until 1876 when it was demolished for the construction of the elevated water tank. 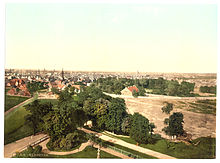 At the beginning of the 19th century, the Lindener Berg had become a barren quarry landscape, where lime kilns smoked. By 1830 Johann Egestorff had almost the entire mountain in his possession and ran his business there for the production of the building material lime. The limestone quarried there was probably also used to build the guard tower at the time. At the end of the 19th century, limestone mining was no longer worthwhile, the quarries were filled in. Green areas and a sports field, inaugurated in 1922 as “Volkspark Linden”, were built on the site.

At the beginning of the 20th century, the bed spring manufacturer August Werner gave the - at the time still independent - city of Linden "the building for a youth home on the Lindener Berg".

Geologically, the Lindener Berg on the low mountain range sill is the last foothill of the Lower Saxon mountainous region , which merges here into the northern German lowlands . There are limestones from the Upper Jura ( Korallenoolith des Malm ), the fossils of which were especially collected by Carl Struckmann and are now in the Lower Saxony State Museum.

The mountain is the only major elevation in the narrower urban area of ​​Hanover. Mountains further out, but still belonging to the city, are the 118 m high Kronsberg in the southeast and the 122 m high Nordberg in the northeast on the site of the Lahe landfill . Other elevations known as mountains are the Tönniesberg and the Mühlenberg in the Ricklingen district , but only about 10 to 20 meters above the surrounding urban area. The Schneiderberg in the north of the city is even less than 5 meters above the area.

Today you can find on the Lindener Berg:

Lying at the foot:

The road Am Lindener Berge running over the mountain represents the border between the districts of Linden-Mitte and Linden-Süd.

Numerous buildings on and around Lindener Berg are under monument protection , including the cemetery, the kitchen garden pavilion , the elevated water tank, the defense tower and parts of the IGS building. See: List of architectural monuments in Linden-Limmer .

The cemetery , which is now a listed building , was established in 1862 and over the years it was enlarged to 6 hectares. After the new Linden main cemetery was opened in 1908 , the mountain cemetery lost its importance and was decommissioned in 1965. Due to old, existing burial rights, occasional burials still take place here today.

In 1913, the 1741 built was kitchen garden pavilion after here translocated . The building was originally a lookout point and pleasure house in a stately Welfen garden , the kitchen garden , on today's Fössestrasse. The garden was removed around 1870 to set up a freight yard.

→ For the main article, see the elevated water tank on the Lindener Berg

Repellent side and back of the container

The elevated water tank on the Lindener Berg served Hanover's first fresh water pipe as a reservoir. The water came from the Ricklinger Marsch and was pumped from there to the Lindener Berg; the associated pump house existed until 1974 in Stammestrasse ( Ricklingen ). The elevated tank fed its water centrally into the Hanover pipeline network, some streets in Linden also received their water from here. The building initiated the local development of hydraulic engineering (river water art, Misburger and Vahrenwalder water towers, waterworks in Ricklingen and Misburg). At the beginning of the 1980s the facility was extensively renovated, with the technical interior fittings having to be completely replaced.

The massive, rectangular structure was built between 1876 and 1878 according to plans by the architect Otto Wilsdorff . The foundation is a 80 m × 50 m measuring, sloping terrace made of natural stone blocks. The container rises to a height of approx. 8.5 m on this base. Buttress- like templates reinforce the plastered walls, which are also sloped. At the top, the container closes with a brick attachment, which is supported by arches on the walls. The tower looks like a battlement and hides the flat roof from the viewer. In the middle of the roof sits a tower-like structure, the original " keep " of which has not been preserved. Wilsdorff based the design on the Hanover School of Architecture , clearly both in the choice of brick as a building material and in the related shapes.

Polygonal pavilion at the north end of the show side (left, not in the picture)

The narrow sides of the building facing north and south have no openings and have a repellent effect, as does the rear facing west. The front facing Linden or Hanover is symmetrical and has a two-storey porch in the middle. Polygonal pavilions adorn the two ends of the show side. The porch used to serve as a residence for the water master, and gate valves, stairs and chimneys were also housed there and in the roof structure.

The elevated water reservoir is still one of the most important water supply structures in northern Germany and, in addition to the neighboring Villa Osmers, characterizes the eastern and southeastern view of the Lindener Berg, even if its long-distance effect is limited by tall trees (to be seen here ).

Numerous forms of jewelry at the Villa Osmers

The Villa Osmers is north of the street Am Lindener Berg and contrasts in its appearance with the water tank opposite. Carl Arend designed the house around 1900 for the middle school director Hinrich Osmers. The detailed elaboration of the villa is something special in Linden. On the facade, brick alternates with plastered surfaces, there is also an ornamental framework and a natural stone plinth. The roof landscape shows various forms of decoration in which elements of Art Nouveau are mixed with reinterpretations of older styles. A kind of observation tower is characteristic of the house. This tower and the asymmetrical division of the structure give the building a “fairytale” appearance. In its prominent location on the hillside, Villa Osmers can also be seen from a great distance.

Overall, only a few residential buildings were built on the Lindener Berg, most of which were only built in the 20th century (east side of the street Am Spielfelde and between Am Lindener Berge and Am Steinbruch).

In March there is a Scilla festival with numerous events, such as readings and visits, because of the bright blue flowers of the Scilla ( The blue wonder of linden trees) in the Linden mountain cemetery.

Every year on May 1st, the “Lindener Berg Kriterium” cycle race is held around Lindener Berg. It leads over 80 km (40 laps of 2 km each) and is very popular with the public. The short but steep slope of the Lindener Berg makes the race so difficult that it is also a challenge for professional teams in the third category (Continental Teams, formerly: GS3 teams). In 2004 and 2005 Tilo won a student from the Dessau RC who drove for the Continental Team Milram in 2006 .