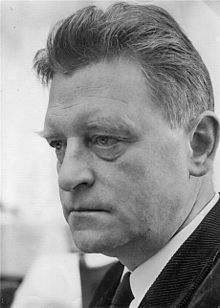 Wirén studied composition with Ernst Ellberg , piano with Olaf Wibergh and conducting with Olallo Morales at the Stockholm Music Academy from 1926 to 1931 . During these years the first string quartets, piano sonata, violin sonata and cello sonata were written. He belonged to the composer group of the 1930s, together u. a. with Lars-Erik Larsson , Gunnar de Frumerie and Erland von Koch . This group of independent individualists had a common predilection for neoclassicism, which freed itself from romantic influences.

From 1931 to 1934 in Paris he studied instrumentation with Leonid Sabanejew . Here Wirén completed his First Symphony, which he never released for performance. In 1934 he settled in Stockholm with his wife, an Irish cellist, and in 1935 became a member of the Swedish Composers' Association and its librarian, and from 1947 to 1963 he was its vice-president.

He composed a. a. two operettas , five symphonies , a divertimento and a triptych for orchestra, chamber music works and piano pieces . Wirén's Serenade for String Orchestra, Op. 11 , has become particularly well-known .