Family coat of arms of the House of Holstein-Gottorp

The Gottorf dukes ruled the eponymous, territorially dispersed sub-duchy of Schleswig and Holstein from 1544 to the beginning of the 18th century, and from 1713 to 1773 only in Holstein. Four Swedish kings emerged from the Gottorf family between 1751 and 1818 , the Russian tsars from 1762 and the dukes and later grand dukes of Oldenburg from 1773 .

Gottorf Castle , the eponymous headquarters of the House of Schleswig-Holstein-Gottorf

Schleswig and Holstein around 1650. The map shows the fragmented duchies, the Gottorf portion is marked in yellow

Frederick I of Denmark and Norway was King of Denmark and Duke of Schleswig in personal union. At his death in 1533 he left four sons. The youngest, Frederick of Denmark (1532–1556) , became a bishop. Christian III succeeded his father as the Danish king. Although the Treaty of Ripe was intended to prevent the duchies from being divided, King Christian III divided. 1544 with his two other brothers: Christian received the so-called "royal share". Johann resided in Hadersleben as Duke of Schleswig-Holstein- Hadersleben . Adolf received the third part with the Residenz Schloss Gottorf . As Adolf I, he founded the line of the dukes of Schleswig-Holstein-Gottorf.

The division of the individual administrative areas in Schleswig and Holstein was done on the one hand according to the amount of tax income, on the other hand intentionally in scattered territories so that neither side could develop a dominant area of ​​rule. However, this also meant more difficult administration and - in the event of a war - boundaries that could not be defended. The country was a patchwork of smaller administrative units, the so-called offices in Holstein, the Harden in Schleswig and the jointly governed property districts .

Johann died childless in 1580. Christian III and Adolf I shared his Hadersleben property. The duchies were now divided into two parts: The Danish, royal part, whose owner Christian III. was, and the Gottorf ducal part, whose owner was Adolf I. The Gottorf territory, which was more than doubled through acquisitions and gains of territory under Duke Adolf, included, in addition to the lands around the Gottorf headquarters, parts of North Frisia , the Eiderstedt peninsula , northern Dithmarschen , Fehmarn , the offices of Kiel , Neumünster , Bordesholm , Reinbek , Trittau and Cismar or Tønder, which belongs to Denmark today .

The small Duchy of Schleswig-Holstein-Gottorf developed into an important power factor in Northern Europe in the political and cultural field. Numerous residential buildings such as the castles of Gottorf and Kiel were expanded or rebuilt, such as the castles of Husum , Reinbek , Tönning and Trittau , under Duke Adolf . From 1586, members of the House of Schleswig-Holstein-Gottorf also provided the prince-bishops of Lübeck and, between 1585 and 1634, the Protestant administrators of the diocese of Bremen . In 1620, Friedrichstadt was the - ultimately unsuccessful - attempt to found a new city as the center of a trade line stretching from Spain to Russia. The cultural policy was more successful: in 1665 the Christian-Albrechts-Universität zu Kiel was founded with the imperial approval . The Gottorf giant globe was one of the greatest technical miracles of its time, and the exotic collections of plants in the gardens of the Residenzschloss were cataloged in the Gottorf Codex . 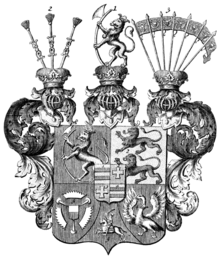 Coat of arms of the dukes of Schleswig-Holstein-Gottorf

Under constitutional law, the duchy belonged partly to Denmark, partly to Germany: The respective liege lord of the Gottorf dukes was - for the areas in Holstein - the respective German emperor, for the areas in Schleswig, north of the Eider , the respective Danish king. While the German emperors had little interest in the small north German duchy and consequently there were never any conflicts, relations with Denmark were tense as early as the 16th century. Dukes and kings were forced to work together in the joint government of Schleswig-Holstein, each side pursuing its own interests. Although originally developed from a Danish branch line, the Gottorf dukes in their quest for independence increasingly turned away from the Danish Empire and instead turned to the Kingdom of Sweden. Instead of gaining greater sovereignty as hoped, however, this policy led to ongoing conflicts with Denmark during the 17th century, culminating in the repeated occupation of the duchy from 1675 to 1679 and from 1684 to 1689. The so-called Gottorf question became a Northern European political issue and could not be permanently resolved even by the Altona Treaty .

Decline of the duchy

In the Great Northern War Gottorf behaved officially neutral, but secretly supported the Kingdom of Sweden by making its fortress Tönning available. After Sweden was defeated by the hostile alliance of Denmark and Russia, the Schleswig possessions of the Duchy were therefore occupied by the Danish crown in 1713. In the Treaty of Frederiksborg this annexation was confirmed 1720th In 1721 the Danish king was honored by the knighthood of Schleswig at Gottorf Castle. From then on, the ducal family ruled as House Holstein-Gottorf only the parts of the duchy located in Holstein and moved the residence to Kiel Castle . De facto downgraded to a duodec state, the Gottorf dukes subsequently tried to regain their old position, but this was not possible without the now weakened former ally Sweden.

Coat of arms of the House of Romanow-Holstein-Gottorp

Thanks to family connections, the people of Gottorf came closer to Russia , which emerged as a new major European power after the war. Duke Karl Friedrich von Holstein-Gottorf from the older line and Anna Petrovna , daughter of Tsar Peter the Great, married on June 1, 1725 in Saint Petersburg . The only descendant of this marriage, Karl Peter Ulrich von Holstein-Gottorf, made his maternal aunt, Tsarina Elisabeth , who was engaged to Karl August von Schleswig-Holstein-Gottorf , heir to the throne and Grand Duke of Russia in 1742. In 1762 he was named Peter III. Tsar of Russia and founded the Romanow-Holstein-Gottorf line , from which the tsars emerged until the October Revolution of 1917. The rest of the Duchy of Holstein-Gottorf was now administered in personal union with the Tsarist Empire: the time of the Grand Duchy began in Holstein . Peter III immediately planned a war against Denmark, but was overthrown and murdered six months after he took office; His widow Katharina II took over the rule . In 1773 she signed the Treaty of Tsarskoe Selo with Denmark , which ended the Gottorf rule in Holstein and established the entire Danish state : the last duke, Katharina's young son Paul , had to rule in Holstein -Gottorf officially renounced, the duchies of Schleswig and Holstein were now completely ruled by the Danish kings, the Lübeck bishopric came to Oldenburg.

The younger line came to the Swedish throne under the son of Christian August von Schleswig-Holstein-Gottorf , Adolf Friedrich . Adolf Friedrich's younger brother Friedrich August thus became Prince-Bishop of Lübeck. Friedrich August took over the rule in 1773 as the ruling duke in Oldenburg , which according to the Treaty of Tsarskoye Selo - in return for winning Holstein-Gottorf - was granted independence by Denmark, and thus established the later grand ducal line of the House of Oldenburg . This ruled until 1918 and is now the oldest surviving line as the head of the entire Oldenburg house.

Gustav IV of Sweden went into exile in 1809, his childless uncle Karl XIII. had to adopt as his successor in 1810 the French marshal Jean-Baptiste Bernadotte , who was elected crown prince by the Swedish Reichstag , whereby the Bernadottes replaced the Holstein-Gottorfer on the throne in 1818.

Dukes in the Gottorf part in Schleswig and Holstein

Dukes in the Gottorf part in Holstein