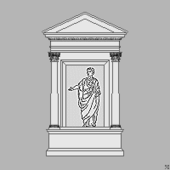 Scheme of an aedicula 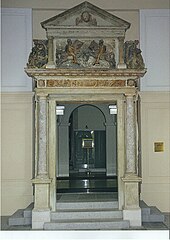 Renaissance portal with aedicule attachment, 1571 in the Palais Niederösterreich

An aedicule (plural Ädikulä ; from Latin aedicula , plural aediculae ) is a small ancient building or component .

Originally aedicula is a diminutive of aedes , which denotes a house or a temple in particular, accordingly aedicula is a small house or "little temple". Aedicula are especially the small replicas of temples that were used to decorate a sacellum , an enclosed sanctuary, as is typical of the oldest Roman cults. These aediculae were then mostly small structures with a niche in which the cult image of the deity was located.

In this reduced form, aedicules appear as an architectural element: a small wall structure that looked like a temple front and in which a statue was located. Later, each column structure , which consisted of columns , pillars or pilasters and a triangular or segmented arch gable and framed a niche , was called aedicula. This style element can be found in the Hellenistic and Roman architectural styles as well as in the architectural styles linked to antiquity, Renaissance , Baroque and Classicism . The aedicula was mostly used to structure large wall surfaces. It can often be found on large gates , city ​​gates or triumphal arches and on large buildings such as thermal baths and palaces . In the Middle Ages , a small private chapel (usually a burial chapel) was also called this.

The following possible meanings of aedicula are to be distinguished:

The latter two meanings are often used in connection with an apse or facade .

There are forms of the aedicula that are not directly based on ancient models. These occur in modern architecture, including in public areas.

In the Greek cultural area the aedicula corresponds to the naiskos .