This article deals with the roof part of the house, for further meanings see roof (disambiguation) . 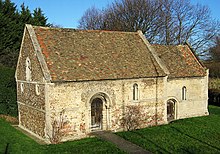 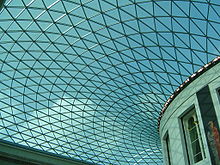 Contemporary glass roof of the British Museum in London

In the building industry, a roof is a construction that closes the rooms and surfaces underneath at the top and thus protects them from the sun, weather or other influences that penetrate from above. The roof can be an independent roof structure over open spaces (e.g. flight roof ), but it is usually the top end of a building . In this case, together with the outer walls, it separates the outside space from the inside space and protects against the weather. Its design is characteristic of the entire building and depends on climatic conditions, building materials and building styles. A wide variety of roof shapes have developed over the course of architectural history .

For most roofs, a distinction can be made between the roof structure (the supporting structure) and the roof skin (the roof covering ).

Basic elements of a roof

Designations on the roof

The gable is the upper final wall surface of a building in the area of ​​the roof. The roof edge on the gable is called the verge or place . This connects eaves and ridge and limits the gable at the top. Edges where two roof surfaces meet in the slope are called ridge (outer edge) or valley (inner edge). A point at which three or more roof surfaces meet is called the point of attack .

A roof always tries to follow simple geometric shapes, generally rectangles. Roof design is called the transfer of the roof into the floor plan . Sits a roof of a composite of a plurality of geometric shapes in plan view, one speaks of an assembled roof , roof with recurrence , decomposing roof or Dachzerfallung . Skewed polygons are referred to as a crooked roof - here the roof surfaces are inevitably curved.

Interruptions or penetrations in the roof skin are referred to as roof openings , for example skylights or dormers, but also the passages of the chimneys (chimneys). The attic is an upper floor in the attic, the attic is an undeveloped room in the same area (in some constructions, no differentiation is made). Roof decorations are all decorative elements attached to the roof.

Dimensions of the roof

Graphic representation of the roof pitch

In general, the roof pitch is constant over the entire roof - or in the case of composite roofs of a roof section. Depending on the roof pitch, one differentiates:

Historical development of the roof

The historical development of the roof goes back a long way. Around 12,000 BC Chr. Hunters and gatherers began to build pent roof-like structures from poles and round wood. The roof consisted of grass, heather or fur. A few millennia later, people built dwellings in sunk pits with gable roofs . In the course of time, dwellings with vertical walls developed and the pits became less and less important. Saddle roofs and hip roofs served to protect these houses. The regional differences in the roof shapes, and thus in the architecture, were always determined by the amount of wood. From the 13th to the 16th century there was a rapid development in construction and building technology. At the beginning of the 13th century, stone houses were still the exception, but in the later course the stone buildings became more and more important. The rafter roof , which was structurally cumbersome up to that time , was replaced by the purlin roof in the 17th century and the mansard roof was added a hundred years later . A short time later and throughout the 19th century, a variety of roof shapes developed. Initially, the dominant steep roof , and later won shallow pitched roofs and the flat roof in importance. 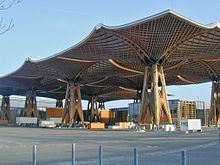 The largest self-supporting wooden roof in the world is on the fair in Hanover and was built for EXPO 2000 .

Since the 19th century are increasingly Steel -structures use, in addition since the 20th century structures made of steel and reinforced concrete , and tent constructions . All these newer constructions can be found in particular on wide-span roofs over train stations , hangars , grandstands , as well as other large halls and flight roofs. In contemporary architecture , plastics and composite materials are increasingly being used for construction.

As a roof structure is referred to the building construction assembly of a roof, that is the combination of layering and supporting and sealing components. One differentiates:

The roof skin is the outer layer of the roof, i.e. the roof covering on sloping roofs (rainproof, but not waterproof) or the roof waterproofing (impermeable to water) on flat roofs. A covered roof only protects against rain, a sealed roof is waterproof. However, the boundary between roofing and waterproofing is fluid. Different materials are used depending on the design, inclination, weather and legal conditions. A distinction is made between hard and soft roofing , whereby the fire behavior is decisive. 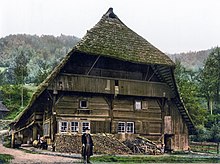 Roofs can be classified according to their roof shape , among other things . However, many roofs are combinations of different constructions, shapes or mixed forms, as well as roofs composed of several forms.

In general, human settlement history distinguishes between two basic roof forms: the flat roof and the sloping pitched roof. Flat roofs are particularly found in dry, warm residential areas, whereas the sloping roof is found in areas of the world that are exposed to damp and changing weather conditions. Originally, the flat roof was not used solely for weather protection, but also served as a lounge area, water collection point, shade or viewing platform ( pueblo design in North America). The pitched roof, on the other hand, initially served as a sloping level with which rainwater could easily be drained away, and later as additional protection against fire (hard roofing). This roof shape can be found above all in the cultural regions in the north and south of Europe and Asia ( China , Japan ), which are subject to intensive climatic conditions . Through colonization , the conquerors, especially from old Europe, carried this roof shape with them to the “New World” of South America or to the areas they had subjugated. There it was carried out mainly on church and sacred buildings.

The attic can be used as storage, utility or living space. To make the roof area usable for these purposes, there are different types of roof structures, openings and incisions:

Technical installations in the roof area

Because the roof is usually the top part of a building, the roof area is used for various technical installations that require a high position. There are also systems for maintaining and securing the roof area.

The so-called roof mills were a historical technical installation in the area of ​​the roof .

The attic is equated with the mind that has its seat at the top of the head . Correspondingly, roof damage is assumed if one thinks that someone is “not quite right” in their head.