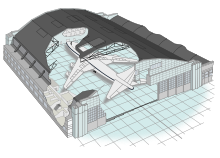 A hangar ( French hangar , German "Schuppen, Schutzdach", plural hangars ) is a large hall made of metal, wood, concrete or similar material for aircraft of all kinds as well as helicopters , airships and space shuttles . These are serviced there or housed like in a garage . On board aircraft carriers , the aircraft and on-board helicopters on other warships are also housed in hangars or hangar decks .

The first hangar for aircraft, Hangar Y from 1879 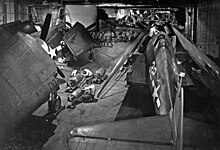 The word was borrowed from French into German military language around 1800 . French hangar means "shed, shelter" and is itself of Germanic origin: It goes back to old West Franconian haimgard , from haim , "house, farmstead" (see home ) and gard "fenced and therefore protected area, enclosure" (see "garden" ). Before the invention of the airplane , the word was used in military vocabulary to mean “shelter for soldiers and weapons ” and also for “ shed for agricultural vehicles and equipment”.

In connection with aircraft, "hangar" was used in the expansion of the Établissement Central de l'Aérostation Militaire near Meudon . There is a hall which was in 1879 Paris World Exposition in 1878 rebuilt as a hangar for the military balloons and airships, which was marked in the layout plan of the station with the letter Y, and under the name Hangar Y was known. From 1902 "hangar" was demonstrably used in England as well. The London Daily Chronicle reported on August 31, 1902, about Santos-Dumont's plans to build a hangar for his airship in the Bois de Boulogne . When Louis Blériot crash-landed in Les Baraques (near Calais ) in the north of France in the early 1920s, he parked his aircraft in a farmer's steel cowshed made by the British company REIDsteel. Bleriot liked this building so much that he called the company and ordered the first three “hangars” to be delivered in Lamotte-Beuvron .

Depending on the size of the aircraft to be accommodated, a roof structure is in the foreground when planning a hangar, which must span the corresponding space requirements in a self- supporting manner. The ratio between the weight of the roof and the load-bearing surface develops unfavorably with increasing size and requires solutions such as tunnel or dome structures or bracing from the outside, which are rather unusual in conventional hall construction and previously only reserved for representative (because expensive) event halls or large churches were. Due to similar requirements, the first large film studios in Hollywood were simply constructed tunnel hangars.

Special forms of hangars are T-hangars - single boxes lined up in a T-shape - and round hangars, or hangars with round parking decks. This type has large, circular, rotatable discs or circular paths (rotary parking rings) embedded in the ground, on which several aircraft can be parked. Hangars of this type are primarily designed for small aircraft classes. In some aircraft hangars you will find lifts for lifting or pulling sports aircraft under the hangar ceiling, so that the existing floor space can be used twice. In addition, by nesting the planes, usually with the help of a roll , the available space can be used more effectively. Another special form of hangar are Hardened Aircraft Shelters , which serve as light bunkers in which military aircraft are sheltered on military airfields to protect them from enemy action. They are often designed as concrete pipes covered with earth and overgrown with grass for camouflage .