The title of this article is ambiguous. For the downpipe as part of a natural circulation boiler, see downpipe (steam boiler) .

Downpipe on a house wall for roof drainage

Sheet steel pipe with transition to a cast iron pipe 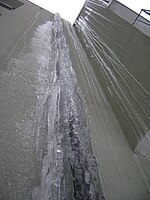 Esophagus with drainage on the sidewalk

Downpipes or eaves pipes are vertically installed pipes for roof drainage or house dirt water drainage inside and outside of buildings.

Rainwater downpipes are used to drain rainwater from the gutter . Characteristic is a large inside diameter in relation to the expected flow rate and the free connection to the ambient air in order to prevent hydrostatic pressure from building up in the pipe along the height of the building. The typically low water flow tends strongly towards the inner wall of the pipe - masses wetting the wall due to surface tension and viscosity , turbulent detached droplets due to the relative movement of the air all around.

Downpipes are made thin-walled because of the low mechanical load and are even temporarily replaced by film tubes made of polyethylene on construction sites.

The materials for rainwater downpipes (outside of a building) are plastic, galvanized sheet steel , copper sheet , titanium zinc and asbestos cement . For smaller roof areas to be drained, and therefore lower amounts of water, and low heights, rain drainage chains can also be used as an alternative .

In Germany, downpipes should be designed so that they can divert rain showers with a rainfall of 60–100 l / (h × m²). The following figures are indicative:

The large diameter takes into account that the water flows along the inner wall and allows the air to flow through in the middle.

Downpipes are lugged and sealed in the case of fiber cement. Sheet metal pipes are made cylindrical, but the lower end is provided industrially or with hand tools with about 3 cm long longitudinal grooves and thus tapered by more than the sheet metal thickness, so that the end fits into the beginning of the pipe below. Fastening is carried out with at least one fastening clip per pipe, which - typically screwed on with an eyebolt made of NiRo steel - clamps the pipe.

Further components such as a downpipe filter , downpipe sieve , rainwater collector or rainwater flap or rainwater switch can be installed on the downpipe before the final connection is made via a standpipe to a sewer or rainwater infiltration. A downpipe can also end with a bent pipe and pour the water into a barrel or onto the surrounding area.

In Wels , granite stones with spherical troughs and cylindrical channels still lying on the pavement were widespread until around 1965 in order to direct the water shooting out of a downpipe in a desired direction away from the house.

The materials for waste water downpipes are cast iron , mild steel , stoneware and plastic ( PVC pipes or HT pipes ); for more details see sewer pipe .
When selecting the material, the insulation properties (background noise) developed by the downpipe are taken into account. Cast iron has proven itself in house construction because it emits little noise due to its high mass and rigidity .