This article describes the character in Greek mythology. For other meanings, see Aigina (disambiguation) 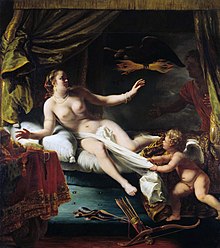 Aegina was a daughter of the river god Asopos and his wife Metope . Zeus , the father of gods , kidnapped her, as she was of lovely appearance and character, in the shape of an eagle or transformed into fire to the island of Oinone . Her father was sad. Sisyphus had observed the robbery from Acrocorinth , revealed the secret to his father and was punished by Zeus. Aegina gave birth to Aiakos on the island . The island was later named after Aigina. Furthermore, Aegina begat the Menoitios with Aktor , as Pindar states.