In order to circumvent the construction ban on aircraft under the Versailles Treaty , the German Reich founded the AG for Dornier aircraft (Do-Flug AG) in the Altenrhein region near the border in 1925 . The plant also included a 600-meter-long grass runway, which was used for regular scheduled flights to Basel , Innsbruck and Munich from 1927 until the outbreak of World War II . Do-Flug AG later became part of the Dornier Works in Altenrhein , which Claudio Caroni took over in 1948 . He renamed the company Flug- und Fahrzeugwerke Altenrhein (FFA) and bought it completely in 1952. In addition to the grass runway, a 1200 meter long and 30 meter wide hard-surfaced runway was built in 1954, including for military use in the event of war. From 1950 the FFA built and tested five FFA P-16 aircraft at the airfield , but an order for 100 aircraft for the Swiss Air Force was suspended before the first series aircraft was manufactured. The hard surface slope was extended to 1,500 meters in 1979.

Claudio Caroni's son Luciano finally sold FFA in 1987 to Schindler Holding , which retained the wagon construction division and resold aircraft construction and the FFA naming rights to Justus Dornier Holding . From 1988 to 1990 the infrastructure of the airfield (including new hangars, airfield buildings, safety devices, instrument landing system ) was expanded. Several changes of ownership followed from 1994: the St. Margrethener construction company Gautschi AG and then the Dutch company Strikwerda bought the airfield one after the other . In 2007 the federal government allowed additional charter and scheduled flights at Altenrhein Airport, although talks with Austria about the licensing of the airport as a regional airport were blocked due to deficiencies in structural conditions. In 2008 the Zurich industrialist Dieter Bührle bought the majority of the shares in the airport and renamed the company Airport Altenrhein AG . In 2009 the airfield was renamed People's Business Airport (now People's Airport St.Gallen-Altenrhein ); a year later, the entrepreneur Markus Kopf became the sole owner and founded the airline People's Viennaline (now People’s ).

In the 2016/2017 winter flight schedule, People's offered the world's shortest international scheduled flight from St. Gallen-Altenrhein to Friedrichshafen with a flight time of around eight minutes. Due to insufficient utilization, the connection was closed again on April 14, 2017.

The bus route 305 of the RTB Rheintal Bus connects the St. Gallen-Altenrhein airport with the train stations of Staad , Rorschach and Rheineck and thus the network of the St. Gallen S-Bahn . Two shuttle buses, coordinated with the flight schedule and organized by the airport operator, depart from Vorarlberg from Bregenz train station and Dornbirn train station to the airport. The airports of Bregenz and Vaduz can be reached by car in 30 minutes, from St. Gallen in 20 minutes, from Feldkirch in 40 minutes and from Chur in an hour. 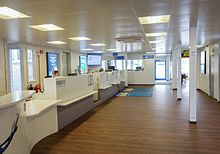 In 2010 Dieter Bührle sold his 50 percent stake in the operating company of the St. Gallen-Altenrhein airport to Markus Kopf.

In 1997, the Rheintalflug operated the Altenrhein-Vienna route 17 times a week. The airline Austrian Airlines (or Tyrolean Airways ) then connected St. Gallen-Altenrhein with three scheduled flights per day with Vienna , after a branch had been founded on February 19, 2003. This cooperation was terminated in March 2011 when the new operating company was transferred. This line was then operated independently by the airline People’s . Since a notice period of five years was provided for a unilaterally declared termination of the contract, Austrian Airlines continued to operate the People's Business Airport and intended to do so until 2015. Since March 28, 2011 (beginning of the summer flight schedule), six scheduled flights have been offered on weekdays between St. Gallen-Altenrhein and Vienna. In March 2013, however, Austrian Airlines announced that it would discontinue the Altenrhein flight for the summer flight schedule. From this point on , People’s was the only one to use this route. People's Airlines flew three times a day during the week and once a day to and from Vienna on the weekend. From April 2016 the frequency was increased to four flights and at the beginning of November 2016 the People's Viennaline started with scheduled flights twice a day from Altenrhein via Friedrichshafen to Cologne / Bonn and back. However, this route was discontinued on April 14, 2017. In summer there are charter flights to holiday destinations such as Sardinia .

The airfield is also important for business and private air traffic. It will be served by private jets, especially during the World Economic Forum in Davos .

Altenrhein has the Aviation Museum Altenrhein with airworthy oldtimers of national fame.

In 1988 and 1998 the so-called International Bodensee Airshow (IBAS) took place at the airport . Another major air show under the same name was planned for 2008 , but had to be canceled due to opposition from the neighboring Austrian community of Gaißau .

From August 26th to 28th, 2005, the Flying Bulls Aerobatics Team performed at the Airfield Show Altenrhein 2005 .

Waiver of license as an airport

The St. Gallen-Altenrhein airfield is the only Swiss regional airfield with scheduled flights with the status of a private airfield . According to Art. 36a of the Aviation Act, however, "an operating license would be required to operate airfields serving public transport (airports)." The Aviation Infrastructure Sectoral Plan stipulated that a license must be granted if scheduled services are expanded. Since the Austrian authorities are currently rejecting the development sought by the Swiss side and the associated licensing of the airfield, a license is to be waived for the time being.

National and regional airports in Switzerland