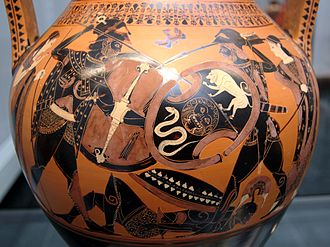 Achilles and Memnon, between Thetis and Eos - Attic - black-figure amphora

According to Greek mythology, Memnon ( Greek  Μέμνων - Memnôn ) was the son of Eos (goddess of the dawn, Latin Aurora ) and Tithonos (son of Laomedon ), thus a nephew of Priam and brother of Emathion . Some also call Hemera (or Himera) as his mother and refer to him accordingly as the son of the "day". He was the high king of the " Aithiopians ", or captain of the field from Susa in Persia , where his father Tithonos is said to have been the governor and favorite of the Assyrian king Teutamus and Priam himself was his vassal. His geographical origins are controversial ( Syria , Bactria ), but the later, dominant tradition makes him king of the Ethiopian ( Theban ) Upper Egypt .

After Arktinos von Milet (in the Aithiopis , also the oldest report) he came to the aid of the Trojans in the 10th year of the Trojan War - shortly after Hector's death - with a large fleet through the gift of a golden vine from his uncle Priam . This happened after some, with so many troops of Indians and Ethiopians that their land power could not be overlooked, but the rest of the sea under his admiral, the Phalas, constituted almost the same power. Others set their army no higher than ten thousand Susians, as many Ethiopians and two hundred chariots. With Quintus of Smyrna , Memnon comes to Troy at one point, immediately after a dispute in the council meeting between Polydamas , Helena and Priam, which was about whether the Ethiopian king can still achieve something. So when Memnon, the high son of Eos, arrived, the king honored him and his people with the most glorious gifts and feasts. As is customary among leaders, the two had an exchange of glorious war stories and heroics towards the end of dinner. Memnon's stories prompted Priam to proclaim the King of Ethiopia as Troy's savior. Even so, Memnon is very humble and warns that hopefully his strength will show in battle, although he believes it is unwise to boast in the evening.

Before the next day of the war, so great was the god's love for Memnon, Zeus orders all other Olympians not to interfere in the fight. In battle, Memnon slew the Pylians Ereuthus , Pheron and Antilochus , Nestor's son. Antilochus had defended his father and killed Memnon's friend, Aithops , in the process. Seeking vengeance, Nestor tries to put Memnon into battle, but Memnon insists that it is not appropriate to fight an old man and he respects Nestor so much that he refuses to fight. In this way, Memnon can be seen as very similar to Achilles - both have strong virtuous values, the ideals of the martial culture of that time. When Memnon reaches the Greek ships, Nestor asks Achilles - a close friend of Antilochus - to confront him and avenge his son. Which leads to the confrontation of the two men, both of whom wear divine armor from Hephaestus - another parallel between the two warriors. 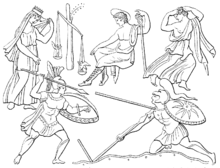 Achilles and Memnon - Kerostasia by Hermes , illustration after a Nolan amphora , southern Italy 330 BC Chr.

Memnon versus Achilles. Frieze of Thesaurus by Sifnos in Delphi , around 525 BC Replica: University of Göttingen

Excerpt from the meeting in the Posthomerica :

“ Wretched one who slew the Trojans so ruthlessly, now you are faced with a son of a god whom you are not up to, for Eos, my mother, the Olympian, is more than your mother Thetis, who pleases herself among the horrors of the sea ! "But Achilles just smiled and said:" Success will teach which of us is descended from nobler parents! I now demand revenge from you for the young hero Antilochus, as I once took revenge on Hector for my friend Patroclus! "
“ Then he flashed his long sword from its scabbard, and Memnon did the same. So they rushed at each other. Zeus loved them both and even in this moment makes them bigger, stronger and more tireless than humans are, so that the whole battlefield could watch the clash of the demigods. In vain did they try to wound each other, now over the shins, now under the armor; their armor clinked; the battle-cry of the Ethiopians, Trojans, and Argives rose to the sky, the dust swirled under their feet, and while the leaders fought, the slaughter did not celebrate among their warriors. The Olympians, who looked on from above, enjoyed the undecided battle. "

But Eris now tipped the fatal scales of the fate of the fight - the kerostasy - which was now no longer balanced. Finally, the sword of Achilles, under the sternum of the divine Memnon, clearly protrudes through his body, the dark blue blade completely protruding, which causes his whole army to flee in horror. Then the Trojans fled, pursued by Achilles as if chased by a hurricane, while he left the corpse to be robbed of his myrmidons .

In Homer's Odyssey , he is mentioned by name only once, before Eurypylos , as the most beautiful of the enemy men, and once probably indicates where he says - the shining son of Aurora killed Nestor's son, Antilochus. Moreover, it is Homer, the earliest known author ever to the term " Aithiopier , used" (Αἰθιόπων) a total of five points. 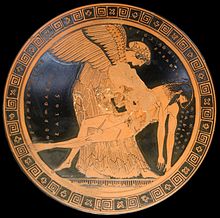 “ Eos let out a sigh in the sky and covered himself in clouds that the earth covered darkness; their children, the winds, flew down to the plain at their command, seized the body of the slain and abducted him through the air from the hands of his enemies. "

After Memnon's death, Zeus was so moved by Eos' tears, which fell from the sky as dew every morning, that he granted him immortality. From the ashes of his funeral pyre, Zeus had a flock of birds rise, the Memnonids ( Memnon birds - allegedly a kind of black hawk ), who fight each other every year over the Dead Hill . His mother is said to have carried away his remains and buried them with Susa. At the place where he was buried, a river is said to have developed, which was called Paphlagonios ( Paphlagoneion ), and flowed with blood every year on the day of his extermination. According to others, his grave is said to have been in Galilee on the river Belos ( Belea ), not far from Ptolemais , according to Simonides by the river Bada , in Syria . According to common Greek tradition, the tomb of Memnon was, through Priam, at the mouth of the Aisepos ( Aisipou ) river, on the bank of the Hellespont , with whose water the Memnon birds wet their wings, and are said to have sprinkled the place of his burial every year. 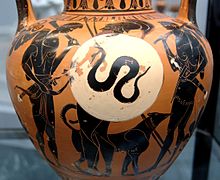 The visual arts found in the two heroes, Achilles and Memnon, so fearfully guarded by their divine mothers, a welcome type for a couple of fighters. There are numerous depictions of the battle between Memnon and Achilles on clay vessels and reliefs, the oldest on an amphora from around 650–630 BC. The scene of psychostasy (weighing of souls) is more popular than that of Achilles and Hector. The surviving sculptures do not teach much about Memnon's armor and horses in the epic. Memnon is depicted as fair-skinned, while his Ethiopian companions were dark-skinned, as is the case with the neck of an amphora of Exekias (c. 540-530 BC), where Memnon is depicted as bearded, clad in God's armor. In Virgil , however, he is described as dark-skinned. An Etruscan mirror in the Cleveland Museum of Art shows the four-winged Eos that brought the body of Memnon to Ethiopia. The scene with Antilochus' death and Memnon's battle with Achilles can be seen on the Iilian tablet . She was also depicted on the throne of Apollo at Amyclai, sculpted by Bathykles .

After him, the Greeks and Romans incorrectly named the Colossi of Memnon near Thebes in Egypt, which the Pharaoh Amenophis III . (nicknamed Meiamoun , that is, " Ammon's beloved"). As long as the upper half of it lay on the ground, thrown off by an earthquake, the picture emitted a ringing tone in the morning at sunrise, which is expressed by a draft of air, which at the moment of the greatest temperature difference between the outer and the in Air trapped in the pores of the stone passed through the latter, explained of course, but drawn into the realm of the miraculous by the ancients and interpreted by name as a wistful greeting which the fallen son of his mother Aurora offered. After the emperor Septimius Severus had put the picture back together again, the sound ceased, although travelers of the modern age may have heard a trace of it. It was only when he was confused with Amenhotep that he was transferred to Ethiopia above Egypt and consequently made partially black, while for the older Greeks Ethiopia only meant a country on the extreme eastern edge of the earth.

He had his special temple in Assyria . Thus sacrifices were made to him at Thebes in Egypt and divine honor was given. He is also said to have been venerated to Susa and for this reason this place was called Memnonia (Memnonea), the Memnonian city, and the royal castle itself the Memnonium - which Persian hero they mixed with the Greek is unknown. His very brass sword, together with the spear, which was also made of ore above and below, was holy kept in the temple of Asclepius at Nicomedia . His departure from the river Choaspes to Troy is said to have been so certain that all the camps he had on the way he had taken were shown long afterwards. Nevertheless, he had to fight on the way with the Solymers who resisted his passage.