Hephaestus hands Thetis the weapons for Achilles (interior picture of the name vase of the ore foundry painter , 490-480 BC; Altes Museum , Berlin)

Hephaestus ( ancient Greek Ἥφαιστος Hḗphaistos , Latin Hephaestus , Germanized Hephast) is the god of fire and blacksmithing in Greek mythology . Hephaestus corresponds to the later Roman Vulcanus . He is one of the twelve Olympian deities .

Hephaestus was “responsible” for the entire artistic spectrum of metalworking, including the manufacture of jewelery , weapons , sacred rituals and profane everyday objects. The temple of Hephaestus dedicated to him in the center of Athens is one of the best preserved Greek temples . 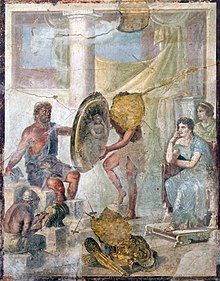 Thetis in the forge of Hephaestus ( fresco from Pompeii , Naples National Archaeological Museum )

The son of Zeus and Hera (or produced by Hera in parthenogenesis ) was, because he was born small, ugly and screaming, or was already lame, thrown from Olympus by his mother and fell near the island of Lemnos in the Oceanos - from In some ancient sources, the lameness is only explained by the fall. There he was rescued, nursed to health and raised by the sea ​​nymphs Thetis and Eurynome . With them he learned the art of blacksmithing and made jewelry for them. Because of the volcanic activity of this island, his cult had started from Lemnos, the Romans located his workshops under Mount Etna .

Growing up, he sent his mother a golden throne. When Hera sat on it, she was handcuffed and no one could free her. After the efforts of other gods failed to move Hephaestus to return to Olympus, Dionysus intoxicated Hephaestus with wine, tied him on a donkey and transported him back to Olympus. The return of Hephaestus is a pictorial motif on numerous vases.

According to another representation, Hephaestus is said to have supported the mother in a quarrel between Zeus and Hera, whereupon the father grabbed his foot and threw him down from Olympus. A Thracian tribe, the Sintoi , who had emigrated to Lemnos (where Hephaestus fell into the sea) nursed him to health, but a limp remained.

As a reconciliation, Zeus decided to give him Aphrodite as his wife. But Aphrodite cheated on him, among other things, with Ares . Hephaestus found out about it and made an elaborate, indestructible net that he attached to the marital bed. When - as Homer reports - Aphrodite and Ares were amusing themselves in the bed, they were caught in this net, and Hephaestus summoned the other gods, who burst out laughing at the sight, the proverbial " Homeric Laughter ". Thereupon Hephaestus and Aphrodite separated.

The workshops of Hephaestus were under the volcano on Lemnos, where the Cyclops were his blacksmiths. Other assistants were Bia (= strength) and Kratos (= strength).

He proved to be an obstetrician when Athena rose from the head of Zeus ("Hephaistosschlag"). As a thank you Zeus is said to have given him Athena as his bride. Athena, however, disappeared; when Hephaestus caught up with her and wanted to unite with her, according to the library of Apollodorus, his seed fell on the thigh of the goddess, who wiped it away with a rag of wool ( ἔριον érion "wool") that was thrown on the ground . So Erichthonios , the legendary hero of the Athenians , was born of Gaia ("earth"). According to Augustine , who offers another popular etymological explanation of the name, the part of the name Eri- comes from ἔρις éris "dispute" - the dispute between Hephaestus and Athena. The Aglaia , one of the three Graces (daughters of Zeus and Eurynome) is said to have impregnated the "glorious Hinkfuß" Hephaestus. However, Hesiod does not mention the child's name.

The sculptor Ardalos is considered to be his child , as is the club-swinging robber Periphetes , whom Theseus killed.

In his underground forge , Hephaestus makes his most famous works, the attributes of the gods and weapons of heroes:

Blacksmith gods in other cultures

Hephaestus is the only manual worker among the Olympic deities. This could point to a religious significance of the blacksmithing . The topos of the “blacksmith god” also appears in Finnish mythology ( Ilmarinen ), and a “lame blacksmith” appears in the Germanic legend ( Wieland the blacksmith ). This has led to the assumption that this is a European hiking motif. The Brothers Grimm found a resemblance to the Nordic Loki . More likely, however, is a relationship to Asian Minor and Syrian blacksmith gods such as Pygmalion , Kinyras and Kothar .

The forging Hephaestus is still often depicted in the fine arts after antiquity, for example by Tintoretto , Bassano , Rubens , Tiepolo , Velázquez and van Dyck .