This article describes the first name Hans . For abbreviations with the same sequence of letters, see HANS .

Hans or Hanns is a male given name and a family name .

Hans is a short form of the male Hebrew given name Johannes , but is officially recognized as a separate form . It also occurs as a family name . It also occurs in combination, usually before other first names , written separately, written together or with a hyphen .

Hans was a very popular first name for boys in Germany: From the end of the 19th century until the 1950s, he was one of the ten most frequently given first names in Germany and after 1910 was often the most frequently given. However, this also includes double names such as Hans-Jürgen and Hans-Dieter , which were particularly common after 1935. Since the late 1950s, the name's popularity has declined sharply.

In the Faroe Islands , Hans is the most common Faroese name . 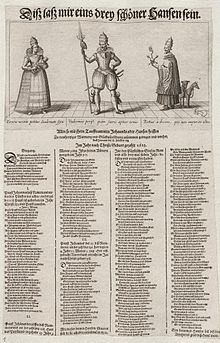 Einblattdruck Diss let me be one three handsome Hansen. All so called Johannes or Hansen with their baptismal names. To heartfelt warning and congratulations collected and venerated; Paid on Johannis deß H. Täuffers day in the year after the birth of Christ 1623

Hans in the Punjabi language

Independent of this Hebrew-European etymology, there is the word "hans" in the Punjabi language, where it means " swan ". With this basic meaning it also occurs as a name, e.g. B. for a population group in Pakistani Punja or the Indian singer Hans Raj Hans.