The buttercup plants (Ranunculaceae) are a family in the order of the buttercups (Ranunculales) within the flowering plants (Magnoliopsida). This family comprises about 62 genera with about 2525 species and is represented worldwide, mainly in the temperate zones of the northern hemisphere.

All buttercups contain protoanemonin and are therefore poisonous to animals.

The representatives of the buttercup family show very original characteristics within the bedecktsamer . Typical features for this are the high and indeterminate number of flower organs, their frequent screwy position, the choricarpic ovary and transitions between the organs. The function of the calyx as protection in the bud stage can be taken over by bracts just below the perigone (e.g. Hepatica ). On the other hand, this function can also be taken over by petaloid nectar leaves, which first transformed from stamens into nectar leaves and then became corolla-like, e.g. B. in the genus Ranunculus .

Most of them are herbaceous plants , very often they are perennial plants , more rarely annuals; there is also woody plants: half bushes , shrubs ( Xanthorhiza ) and vines ( Clematis ). In some species, rhizomes ( e.g. Coptis ) are formed as persistence organs. The leaves are usually arranged alternately. The exception is e.g. B. the genus Clematis , in which the leaf position is opposite. The leaves are often divided or articulated. There are usually no stipules present.

Occasionally only one cotyledon, but mostly two cotyledons (is cotyledons ) exist, which are often grown together. 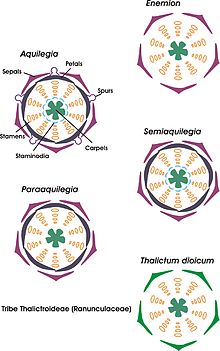 The genera in the tribe Thalictroideae show the entire variation of the flower morphology of the buttercup family. In Enemion and Thalictrum petals are missing , in some species of Thalictrum ( T. dioicum ) the sepals no longer fulfill a flower function either. The novel flower organ of the staminodes is only found in Enemion and Aquilegia . The latter is also the only genus of the Thalictroideae to carry nectar spurs.

The flowers are, often on an inflorescence stem, individually or in zymose , racemose or paniculate inflorescences together.

The flowers are mostly hermaphroditic. While some genera ( e.g. monkshood ) have zygomorphic flowers, most buttercups have simple radial symmetry flowers, although carpels and stamens are often screwed. In contrast to the majority of the other taxa of the Bedecktsamer, the inflorescence consists mostly of a circle of bloom. The exception is e.g. B. the genus Adonis , whose flower envelope is divided into calyx and crown. The number of bracts varies within the family from four bracts, for example in clematis, to many bracts, for example in celandine . The five to fifty free bracts are in one or two circles.

Many taxa have nectar leaves, which are nectar-secreting flower organs, which are derived from the anthers (stamens) and are not a real petal. These honey leaves have a nectar pocket at the bottom.

The stamens and carpels are usually present in large numbers. Both are often screwed up. All of the 15 to 100 stamens can be fertile or the outer ones are staminodes . The 3 to 100 carpels are mostly free (= chorikarp ) and are only fused in a few taxa.

The pollination is usually by insects ( Entomophilie ), rarely ( Thalictrum ) by the wind ( anemophily ).

Most of the fruits of the buttercup family also show relatively original characteristics, especially the follicles , which are often pelvic fruits. There are also taxa with nuts . A few taxa produce capsule fruits or berries .

Important ingredients are Esteralkaloide, for example, the most toxic substance Aconitin at Eisenhut ( Aconitum ). Other alkaloids such as protoanemonine , diterpene alkaloids and isoquinoline alkaloids also occur frequently.

The buttercups are distributed worldwide with centers of abundance in the temperate , cold-temperate and boreal areas of the northern and southern hemispheres .

The Ranunculaceae family is divided into five subfamilies and eleven or twelve tribes . Only two subfamilies also contain taxa in Central Europe.

The Ranunculaceae family contains around 56 to 62 genera with around 2525 species (all genera and a selection of some species):

Subfamily Ranunculoideae Arnott : It contains ten tribe with about 38 to 46 genera and about 2025 species:

Subfamily Thalictroideae Raf. (Syn .: Isopyroideae Schrödinger ): It contains only one tribe with about eight genera and about 450 species:

Subfamily Coptoideae Tamura : It contains only one tribe:

Tribus Coptideae T.Duncan & Keener : This includes two genera with around 16 species that are native to East Asia and North America: