Kashmir is a redirect to this article. Further meanings are listed under Kashmir (disambiguation) . 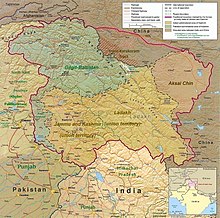 Kashmir ( Devanagari : कश्मीर , Urdu : کشمیر, Kaśmīr , also Kashmir ) is a disputed region in the Himalayas between India , Pakistan and the People's Republic of China .

The former Indian state of Jammu and Kashmir (until 2019)

The Kashmir Valley lies at the same latitude as Syrian Damascus , Moroccan Fez and US South Carolina at an altitude of 1700 m above sea level. It is about 135 km long and 30 to 40 km wide.

The region lies on a 200 km wide fracture zone between the Indian and Eurasian continental plates .

Flag of the Maharaja until 1936

Coat of arms of the princely state

Kashmir has its origins in the Kashmir Valley with the old trading center Srinagar in the high mountains of the Front Himalayas. In its long and eventful history, it has developed as a crossroads of large caravan routes (historical Silk Road ) between the Middle East, Central and South Asia. At the same time, it was and is still today the intersection of extensive Buddhist, Kashmiri-Hindu and, from the 13th century, increasingly Islamic domains. From time immemorial, cashmere has served as a bridge and node between the Middle East , Central and South Asia .

In 1587 Kashmir was annexed by Akbar I to the Empire of the Mughals of Delhi and in 1739 it was conquered by Nader Shah . Kashmir remained a province of the Empire of Kabul until 1809 when the governor Muhammad Azim Khan declared himself independent. In 1819 the Sikh Maharaja Ranjit Singh occupied the capital Srinagar and large parts of the country.

After the British victory over the Sikhs in the First Sikh War , Kashmir and Jammu (sometimes called Jammu and Kashmir ) became a British protectorate as a princely state in 1846 . The first Maharaja was the Raja of Jammu , Ghulab Singh, a Hindu from the Rajput clan of the Jamwal in 1846-1856.

In 1941, Kashmir had an area of ​​218,896 km² and a population of 4.2 million. However, the tribal areas in the north were only nominally under the sovereignty of the Maharaja. Overall, the north of Kashmir was dominated by Muslims , the south Hindu and the east Buddhist . A power-political imbalance prevailed, however, because high positions and public offices were almost exclusively occupied by Dogra-Hindus from Jammu. Protest movements by Muslims, such as in 1930 against the authoritarian rule of the Maharajas, were suppressed with increasing frequency and mostly in a bloody way. When Great Britain decided on July 18, 1947, India's independence and the formation of the Dominions India and Pakistan, Kashmir was first independent under Maharaja Hari Singh (1925-1952). 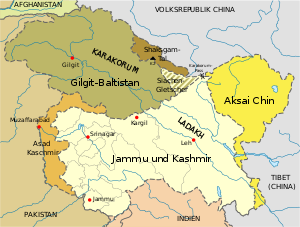 The cause of the current tension in Kashmir is due on the one hand to the conquest of the Sikhs of Punjab (India) in 1819 , which united Muslim Kashmir with the Hindu Jammu, and on the other hand to the process of partitioning British India in 1947, which resulted in the states of Pakistan and India had been founded. The division into the Muslim-dominated Pakistan (including East Pakistan, today's Bangladesh ) and into the Hindu-influenced Indian Union according to the Mountbatten Plan followed the so-called " two-nation theory ".

According to this, those districts of British India with a Muslim majority according to the last available census of 1941 were to be assigned to Pakistan. In the opposite case, Muslim minority areas should remain in the Indian Union. This criterion did not apply to the semi-autonomous princely states and therefore not to Kashmir either. The corresponding British law ( Indian Independence Act of 1947 ) stated that the rulers of the princely states had the freedom to decide whether to join India or Pakistan (or remain independent).

After the partition of British India , Kashmir initially remained independent, but soon became a region of military conflict. The then Maharajah Hari Singh tried to maintain sovereignty by delaying the decision to join the Pakistani or Indian side. After the invasion of supported by Pakistan Pashtun tribal militias and the ongoing rebellion against his rule (particularly in the district Punch) the ruler India asked for military assistance. In order to receive this, he declared on October 26, 1947, that his princely state would join the Indian Union. Within a few days, India moved massive troops to the crisis region to counter insurgents and infiltrated fighters. Pakistan did not accept joining India. In addition, the religious conflict between Hindus and Muslims, which was already smoldering in the colonial period, was increasingly transferred to the level of state policy, which made it increasingly explosive, even though the majority of the inhabitants of Kashmir had a moderate religious attitude. The escalation ultimately led to the First Indo-Pakistani War , which ended in 1949 with the de facto division of Kashmir under the mediation of the United Nations . Since then, the Indian state of Jammu and Kashmir existed in the south until 2019 (about two thirds of the territory, was divided into the union territories of Jammu and Kashmir and Ladakh in 2019 ), while the north with Asad Kashmir and Gilgit-Baltistan - until 2009: Northern Areas (northern areas ) - is under Pakistani administration. The border line between the Pakistani and Indian parts forms the armistice line (" Line of Control ") of 1949. It is about 750 km long and is under the mandate of the United Nations.

The referendum called for by the United Nations Security Council in April 1948 on Kashmir's accession to India or Pakistan has not yet taken place. India and Pakistan cite the following reasons:

Pakistan primarily claims a Muslim nationalism and derives from this the claim to sovereignty for a country with a 77% Muslim population:

From the Indian point of view, the main priority is to avoid a precedent for a detachment from the state association of India and to secure the traffic routes into the high valley of Kashmir. The governing principle of secular nationalism, i.e. the independence of the government from religions, should apply to all of Kashmir and thus also to the Muslim-dominated areas. India therefore sees no need for discussion on the Kashmir issue.

From a Pakistani point of view, the Kashmir issue sets a precedent for the country's role as the self-proclaimed “homeland of Indian Muslims”. By annexing Kashmir, India is trying to question this claim and thus the entire founding concept of the Pakistani state. Seen in this way, the Kashmir conflict represents an important identifying point of reference for the Pakistani state, which wants to legitimize itself against system critics via a common enemy.

In addition to India and Pakistan, the People's Republic of China is a third party indirectly involved in the Kashmir conflict. After the violent occupation of the Aksai-Chin plateau in eastern Kashmir by Chinese troops (1956 and 1962), India increasingly moved closer to the Soviet Union . Due to the aligned interests against India, Pakistan became an ally of China. In 1963 it ceded a narrow strip around the K2 summit region to China. This area, which was once part of China, has been controlled by Pakistan since the British colonial era. In return, Pakistan received Chinese aid to build the Karakoram Highway .

The area of Aksai Chin was an autonomous principality until 1956, which was based on the policy of the Maharajas of Kashmir. The Chinese saw the occupation as the recapture of an area illegally occupied by British India in 1846. They also planned a road from western Tibet through Aksai Chin to China, which was also built from 1958.

Both the Indian and Pakistani governments, both internationally and in South Asia, claim to be the legitimate representatives of Kashmiri interests. While the Indian side propagates a multicultural state that tolerates minorities, but does not accept any attempts at separation from the individual states, Pakistan claims to represent all South Asian Muslims in one (Pakistani) state, since their interests are ultimately not secured in a minority situation under Indian administration be. Multiculturalism is only the external rhetoric of an implicit politics of paternalism and disadvantage.

As early as 1947, however, another option became apparent. Kashmiri nationalists called for the establishment of a landlocked state, Kashmir, independent of India and Pakistan, which should ideally consist of the Pakistani-controlled Asad Kashmir and the Indian-controlled Jammu and Kashmir. This variant of the solution is still rejected today not only by India and Pakistan for strategic, economic and socio-cultural considerations, but also by a majority of the Kashmiri population, who demand an independent Muslim state of Kashmir.

Pakistan called for a solution to the Kashmir issue on the basis of the relevant United Nations resolutions and the right of self-determination of the Kashmiri people, especially Muslims.

In the course of the détente that began at the end of 2003, Pakistani President Pervez Musharraf proposed a complete withdrawal of troops (of the Indian and Pakistani military ) from the disputed Himalayan region. India rejects this with reference to the unstable, complex security situation and because of the danger of extremists infiltrating from Pakistan. The central point of contention between the two countries, according to which they both lay sole claim to all of Kashmir, has been excluded from the rapprochement process so far. 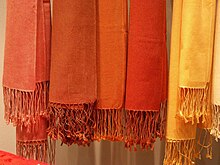 Pashmina scarves made of cashmere wool and silk, made in Nepal

The precious cashmere wool is named after the region and is extracted from the undercoat of the cashmere goat at the end of winter by combing it. Approx. 150 grams are collected per animal, which then have to be cleaned (by hand) from the individual upper hairs (awns). The selling price of the wool depends on its quality; the hair should be as fine (thin), long and light (white) as possible.