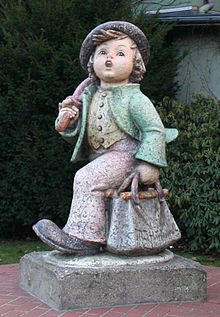 Hänschen klein is a German folk and children's song whose roots go back to the 19th century.

The original version of the text Hänschen klein comes from the Dresden teacher Franz Wiedemann (1821–1882), who published the text in 1860 in the appendix “Old songs, new words” to the 4th edition of his collection of seeds for children's hearts . The motif is similar to the poem Das Erkennen (1835) by Johann Nepomuk Vogl (1802–1866), in which a wanderer ultimately returns to his mother.

The educational text enables children to experience human closeness, saying goodbye, the pain of separation and rediscovery. In the spirit of the Biedermeier period , preference is given to domestic security. As in all of Franz Wiedemann's works, the aim of the poem is to convey the prevailing norms of the bourgeois society of that time to a young generation.

The original text did not deal with a running away toddler, but a young man who goes out into the world to try his luck (cf. the proverb "What Hans never learns, Hans never learns"). The original text describes the boy's detachment from his mother as part of growing up and the return as a grown man. Hans becomes Hans. The mother lets him go in spite of her own grief, then recognizes him as a man on his return and meets him with love.

Since the end of the 19th century, the song has been widely used in a text version that arose from the contraction of Wiedemann's first two stanzas. Although the wording of the remaining parts of the text was hardly changed, the shortening changed the plot decisively: Hans does not return as a grown man, but thinks about his return immediately after leaving. The newer version has practically reversed the content, because the attempted process of separation from the mother does not succeed. The mother is sad about the departure, Hanschen (the boy) stays there and may never become Hans (the man). The version appears for the first time - with a different melody - by Ernst Schmid . When Otto Frömmel , 1900 printed without melody, it also includes a new second verse, which the song as moving Singspiel makes performable. It is not certain whether this repositioning was intentionally written by Schmid, Frömmel or another editor, or whether it was “sung about ” by the vernacular ; Frommel states in the preface that he collected the nursery rhymes in the Berlin area.

An early evidence of the melody is a written down as a dance melody in a musical manuscript and dated: "Heinrich Nicol Philipp zu Seibis den 30 Junius 1784".

The hunting song Jägerlust (“Drive there”), printed by Johann Gustav Gottlieb Büsching and Friedrich Heinrich von der Hagen (1807), is sung to this melody . Büsching and von der Hagen state: "The melody, like the song, is very well known in the local area [= Berlin] [...]". In the Deutsches Liederhort , Ludwig Erk and Franz Magnus Böhme write : “The song may have been written at the beginning of the 18th century.” Erk and Böhme also report that the melody “should be of French origin, which would not be impossible, as there are also many hunting customs came from France ”. In Franz Wiedemann's first print by Hänschen klein , the song has the note “Mel [odie]: Fahret hin etc.” The text was therefore intended by its poet from the beginning for the melody on which it is sung to this day.

Furthermore, the song Turner ziehn , written by Hans Ferdinand Maßmann in 1814 , was sung to the same melody.

Franz Wiedemann: Hänschen and his mother , 1877

Little little boy , goes alone
into the wide world,
stick and hat
looks good on him, is also good-hearted.
But mother cries a lot,
now she has no baby anymore.
Wish you luck, says her look,
just come back soon!

For many years, cloudy and clear,
Hans has been away from home.
Then the child thinks about it,
Go home quickly.
Yes, now it's no longer a little boy,
no, he's a big Hans;
Burned black forehead and hand.
Will he be recognized?

One, two, three pass by,
don't know who that might be.
Sister says: What a face!
Doesn't know the brother.
So when his mother comes,
hardly looks him in the eye,
she already calls out: Hans! My son!
Howdy God, my son!

The text of the third stanza can also be found (in a slightly different form) in a children's game from the 19th century.

Awareness today (since the end of the 19th century)

The song in its repackaged version was very often one of the first songs ever to be taught to children in the whole of German-speaking countries. Text versions that are customary today have been sung further compared to the version from 1900:

Little Hans, all alone
wants to go into the world!
Stick and hat
look good on him, he 's also good-natured.
But the mother cries a lot,
now she doesn't have a baby anymore.
So the child
thinks about it , turns around quickly.

Hänschen: Dear 'Mama, I'm here,
says the Hänschen, hopsasa,
Believe me, stay here,
don't leave yourself anymore.
Circle: Mama is very happy,
And the little boy even more;
Because, as you know, it is
so beautiful with her.

Hänschen klein went out
into the wide world alone .
Stick and hat
look good on him, he is very happy.
But mother cries a lot,
now she doesn't have a baby anymore.
Then the child thinks about it and
runs home quickly.

In today's usage songbooks, there is no clear preference for a particular text version. There are both the single-verse version as well as the three-verse original by Franz Wiedemann and the two-verse version by Otto Frömmel. Some songbooks also print a mixed version in which the verse of the single verse version is followed by the second and third verse of Wiedemann's original.

The song's popularity resulted in numerous parodies. For example, a Berlin variant was common among children :

Hänschen klein
went to a
gymnastics club in Berlin alone .
Doing gymnastics on the horizontal bar,
falling in the dirt,
his nose is gone.
When Doctor Jumping Jack comes, the nose
sticks with spit.
Hänschen klein
is very happy and
now has one more nose.

Since the melody at the end leaves the word “more” unstressed (“Náse more” is a dactylus ), to the delight of others, newcomers sometimes did not understand the meaning immediately.

The same parody has been passed down with other regional references, e.g. B. from Schrems in Lower Austria .

In the first half of the 20th century in pre-state Israel (in what was then the British Mandate of Palestine ), the Vilna- born writer Yisrael Duschmann wrote a Hebrew version of Hänschen in small letters . The song (Hebrew: Jonatan HaKatan ) is today the most famous children's song in Israel .

However, nothing of the original content has survived in Hebrew. Translated the song is:

Little Jonathan
ran to kindergarten in the morning.
He climbed the tree
and looked for chicks.
Woe to the naughty: there is
a big hole in his pants.
He rolled down from the tree
and got his punishment.

Hänschen klein was presumably the first song that was played by a computer - the Zuse Z22  . For this reason it has found its way into the German dubbed version of Stanley Kubrick's film 2001: A Space Odyssey , where it is sung by the on-board computer HAL 9000 when it is deactivated. Hänschen klein is also part of the title melody of the film Steiner - The Iron Cross .

Guitar arrangement of a simple, folk song, and a syncopated version of the song