Proverbs is a redirect to this article. For the Book of Tanakh, see Book of Proverbs . 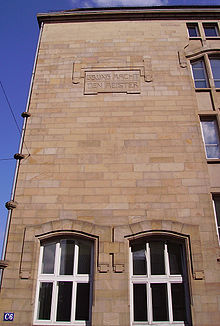 "Practice makes perfect" at the Friedrich List School in Mannheim 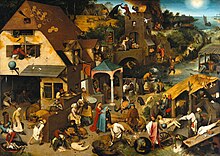 "As the fox preaches to the geese"

Proverbs (rehearsals, paromies) are traditional folk statements regarding behavior, a sequence of behavior or a state, which mostly represent a life experience. Proverbs, like idioms, are an important part of the thesaurus in almost every language. In linguistics , the customer is from Proverbs from the Greek word παροιμἰα (paroimia) as a scientific discipline paremiology called.

"A proverb is a short sentence that is based on long experience."

"A proverb is a well-known, firmly coined sentence that expresses a rule of life or wisdom in a concise, short form."

“In contrast to the direct imperative -» You shouldn't kill «or» Be noble, helpful and good «- here the norms dress in the guise of empirical statements:» Honesty lasts the longest «. This statement would probably not withstand a large-scale experiment; Least of all the daring assertion “No one regretted the young man” […] If the community had their need for honest citizens, the Emperor and Pope would have packed their desire for a rich offspring of soldiers and Catholics into transparent requests - “Be honest” or “Get married early, so that you will have many children ": The effect would in all probability have been less than that combination with supposed life experience that the individual could never counter because he lacked knowledge of the world."

The distinction between the proverb with its unknown author and the quotation and the "winged word" , the origin of which can be proven, is not always clear. In linguistics, the aspect of repetition and immutability is sometimes understood with a term from Eugenio Coseriu as "repeated speech" ( discurso repetido ). Quotes are first and foremost individual inventions, but they can become proverbial. With more and more winged words, the quotation consciousness is lost. This is particularly true of many of the expressions found in the Bible. It is noticeable that in Protestant societies there is more allusion to the Bible than in Catholic ones.

Some book and film titles have already taken on a proverbial character. Even shortened refrains from folk songs or hits are mistaken for proverbs.

A quote similar to the saying is called a winged word . According to André Jolles , the proverb and the catchphrase belong to the so-called simple forms .

It is true that a characteristic of the real proverb is that its author is unknown, but some supposed proverbs are not based on generalized social experiences, but have their origin in Latin authors or in the Bible . The majority of the latter found their way into the German language through Martin Luther's translation.

Some pithy sentences from literature also became so popular that they are now often used as proverbs, although their origin can be proven:

The Book of Proverbs of Solomon ( Hebrew מִשְלֵי שְׁלֹמֹה, Mischle Schlomo ) belongs to the Ketuvim (writings) of the Jewish Bible . It goes back to the time of Hezekiah , king of Judah, to the fourth century BC. Thematically it treats the -consequence-related actions , wisdom , social or family ties and social justice : "Open your mouth for the dumb, for the rights of all weak! Open your mouth, judge righteously, give justice to the needy and poor! ”( Prov 31: 8-9  EU ). The book motto is Prov 1,7  EU : "The fear of the LORD is the beginning of knowledge, only fools despise wisdom and education."

The saying in the Middle Ages

In the culture of the Middle Ages, the proverb was valued as a means of expression in all areas of life. Since the 12th century numerous textbooks on rhetoric have recommended the proverb as a stylistic device to support the evidential value of didactic writings. Medieval sermons often put proverbs next to written words. Epistemologically, the proverb corresponds to the tendencies of scholastic realism and its architectural idealism. Since it regards the general, the universal as the only real and conclusive evidence ( universale ante rem ), it allowed medieval people to think in everyday life as in their theology. For this reason Johan Huizinga even describes the proverb as the most inherently linguistic means of expression in medieval intellectual culture. Only in the late Middle Ages, for example in the works of Geoffrey Chaucer , did skepticism towards abstract linguistic forms such as the proverb become clear.

A proverb takes the form of a fixed and unchanging formulation. This is where it differs from the idiom .

The form of the proverb is often strengthened by alluding rhymes , end rhymes or inner rhymes .

With the imperative claim “ Everyone should come to their own door! “,“ One should… ”,“ One must… ”or“ One may… ”the saying has taken a generalized form. As a rule, it expresses a generally applicable sentence, which is either a

Sometimes proverbs contradict each other.

“The most common consolation lies in the fact that the words allow us to chatter along with the course of the world, and the so-called saying wisdom also makes an excellent contribution to this: if I can babble today,“ Be the same and like to join you ”, tomorrow will leave me alone , in the opposite situation, language does not fail: »Opposites attract« "

Many proverbs have changed, mixed up and often further developed in terms of content over time. These advances have not yet been adequately processed in research. Many variations are meant to be derisive and want to emphasize or caricature the triviality of the message of the original.

Further pictorial examples can be found in the article on catachresis (broken image).