Horn leaf ( Ceratophyllum ), sometimes misleadingly referred to as hornwort (this is already the German name of the genus Cerastium ), forms the only genus of the horn leaf family (Ceratophyllaceae) and the horn leaf-like order (Ceratophyllales) within the flowering plants (Magnoliopsida). The genus name Ceratophyllum is derived from the Greek words keras for horn and phyllon for leaf. These aquatic plants are not to be confused with the candelabrum algae, which sometimes look very similar .

Ceratophyllum species consist of a central stem axis with a tensile, but fragile stem to which leaves and lateral axes are attached. The main axis reaches a length of about 1 meter. Ceratophyllum species do not have roots to anchor in the ground. They float freely in the water and absorb nutrients through root-like structures that have arisen from transformed sprouts. The plant continues to grow on one end while it dies on the other end.

The leaves are made up of whorls (whorls) and bifurcate one to several times depending on the species. In the frequently occurring rough horn leaf, for example, they are once or twice forked, dark green and end in two to four rigid, rough, linear tips. In the rarer Zarten Hornblatt they are lighter green, finer and three to four times forked with five to eight tips. The horn leaf usually only blooms in warm summers. From June to September, small inconspicuous greenish flowers form in the leaf axils.

The horn leaf species are single sexed ( monoecious ). The very inconspicuous flowers are in the leaf axils, but can hardly be observed. Also, fertilization and seed formation take place under water.

As a rule, however , the plant spreads vegetatively , with the brittle shoot axes disintegrating in spring. A new individual grows out of every fragment. In addition, starch-rich winter buds ( turions ) are formed in autumn , which detach and sink to the bottom. New plants also emerge from them in spring.

The genus Ceratophyllum is represented worldwide with around ten species in freshwater. Ceratophyllum species grow in stagnant or slow-flowing, summer-warm, nutrient-rich, often even hypertrophic (polluted) waters.

The species in this family are very different from all other flowering plants. They are probably the sister group of the eudicotyledons , but possibly also the monocotyledons or the Chloranthaceae .

The genus Ceratophyllum was set up in 1753 by Carl von Linné in Species Plantarum . 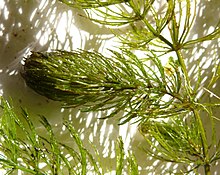 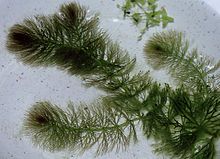 There are about five (to ten) species in the genus Ceratophyllum :

Various types of horn leaf are used in the aquarium hobby. They are characterized by strong growth and help to improve the water quality. Their ability to absorb nutrients dissolved in the water also makes them suitable for combating algae.