From his father Philip III. he had inherited extensive property in Normandy ( Évreux , the county of Mortain , parts of the Vexin and the Cotentin ). From his mother, Joan II of Navarre, he inherited the small kingdom in the Pyrenees, the Champagne and Brie , which she had received in 1317 as compensation for the renunciation of her claims to the French throne. Despite this waiver by his mother, Karl, as the grandson of King Ludwig X., for a long time raised claims to the crown of France against King John II , whose daughter Johanna (* 1343, † 1373) he had married, and renewed her after his death (1364) his successor Charles V. 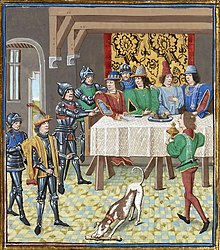 John II orders that Charles the Evil, King of Navarre, be arrested; from the chronicle of Jean Froissart .

Charles was involved in the murder of the Connétable of France , Carlos de la Cerda , on January 8, 1354, which is why Johann II attacked him in Évreux and Navarra . However, after he had allied himself with England and received military support from Edward of Woodstock , the "Black Prince", Karl was not only able to achieve peace in the Treaty of Mantes , but also to enlarge his property. In 1356 Johann II took him prisoner and locked him up in the fortress Château-Gaillard , but after the defeat of Johann and his capture in the Anglo-French Battle of Maupertuis (September 19, 1356) , Charles was released again, considering the circumstances different statements exist. According to one, he was able to flee on November 9, 1357, according to the other, it is said that shortly after Maupertuis the Estates- General gathered and decided to release Charles, in the hope that he would become the cousin and son-in-law of Johanns France after the defeat by the The English will defend. However, Karl only made contact with the English to secure additional territories. Shortly thereafter, in February 1358, he was one of the French princes who triggered the anti-crown uprising of the Jacquerie , which Crown Prince Charles, later Charles V, was able to suppress in the absence of his father, who was imprisoned in England.

In 1361, after the early death of his cousin Duke Philip I of Burgundy , Charles claimed the duchy for himself as the grandson of Margaret of Burgundy , the eldest daughter of Duke Robert II († 1306). King John II, who in turn was the son of Robert's second daughter Johanna of Burgundy and had married the early widowed mother Philip I, withdrew the duchy as a settled fief and gave it as an appanage to his youngest son Philip, later Philip the Bold .

In 1364 Karl was defeated by Bertrand du Guesclin in the Battle of Cocherel . His territories in Normandy were confiscated, after which he dropped his claims to the French throne.

Karl's unreliability, volatility, disloyalty and absolute ruthlessness appeared so conspicuous even to his contemporaries, who were used to brutality, that they nicknamed him “the bad guy”. The legend has grown around his death that he had himself sewn into towels soaked with brandy every evening in order to recover from an illness. One day the cloths caught fire from a torch and Karl was badly burned. His martyrdom did not end until two weeks later, on New Year's Day 1387.

Coat of arms of Charlemagne

The children of Charles II and Johanna were: