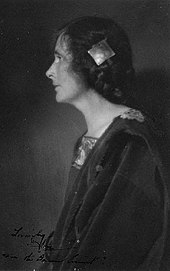 Anne "Annie" Wardrope Nott Brigman (born December 3, 1869 in Nuuanu Valley near Honolulu , Hawaii , † February 8, 1950 in Eagle Rock near Los Angeles , California ) was an American art photographer , poet and one of the first members of the Photo Secession . Her most famous photos were made between 1900 and 1920 and mostly show female nudes in an original, naturalistic context.

Anne Nott Brigman was the oldest of Mary Ellen Andrews and Samuel Nott's eight children. The parents served as missionaries in Hawaii. Anne's grandfather Lorrin Andrews was one of the first American missionaries on the Pacific island chain. The father came from Gloucester, England . When Anne was 16 years old, the family moved to Los Gatos, California . In 1894 Anne Nott married the ship's captain Martin Brigman, whom she accompanied on numerous trips to the South Seas. In 1900 she ended her travels and joined the bohemians of San Francisco . There she became a close friend of Jack London and the poet Charles Keeler. In 1901 she began to take photographs. With exhibitions in the regional photographic salons - among others at the California Camera Club - she gained a reputation as a master of pictorialistic photography in just two years. Through an edition of Camera Work , she became familiar with the work, ideas and writings of Alfred Stieglitz . She wrote to the New York photographer and praised his magazine, whereupon Stieglitz invited her to become a member of the Photo Secession . In this context, she presented her work several times in group exhibitions of the members in the New York Gallery 291 . In 1906 Brigman was the only member of the Photo Secession west of the Mississippi.

From 1903 to 1908 Stieglitz exhibited Brigman's work several times and published her photographs in Camera Work . In contrast to many contemporaries, Brigman did not work commercially, nor did she take portrait photographs . In 1910 she divorced and moved in with her mother. In 1911 she took part in the highly regarded exhibition at the Albright-Knox Art Gallery in New York and in 1922 in the International Exhibition of Pictorial Photography in San Francisco. She was revered by photographers on the west coast , and her photographs had a profound influence on her contemporaries.

In 1929 Brigman moved to Long Beach , Southern California. Although in later years she turned more to the more puristic style of straight photography , she never completely gave up her original pictorialistic perspective. Her late work was characterized by abstract black and white close-ups of sandy beaches and vegetation. In the mid-1930s she studied poetry and took writing courses.

Anne Brigman photographed until the early 1940s. Her volume of photo poems, Songs of a Pagan, found a publisher in 1941, but it was not published until well after the end of the war , in 1949. Anne Brigman died on February 8, 1950 in Eagle Rock near Los Angeles.

Anne Brigman photographed mostly female nudes , which she staged in dramatic situations in the midst of untouched landscapes. Her photographs are among the first in the history of photography with this subject. Many of her recordings were made in the Sierra Nevada . Brigman, who had his left breast amputated, often posed himself for her pictures. She then processed the photographs with chemicals, paints, pens and provided them with overlay effects.