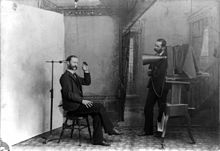 Creation of a portrait in a photo studio in 1893 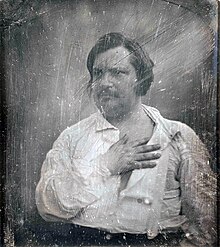 Portrait photography is the continuation of portrait painting with photographic means. The meaning arises from different aspects:

Some prominent politicians employ personal photographers to ensure conceptual imagery and expression. Portraits are created during work or in the studio under controlled conditions.

Portrait photographs are often taken in the studio by professional photographers , but photography amateurs also deal with the genre.

For studio work by professional photographers, the person has to "sit model", as in painting. The advantage of photography in such a "shoot" is the possible variation of the poses . In the dialogue between the model and the photographer, different poses are assumed until the actors are satisfied with the result. This makes certain demands on the communication and empathy of the photographer. The question arises for the person portrayed as to what he would like to reveal about himself. In digital photography, there is also a discussion about the display of photography on the computer screen as part of the work process.

An important design option for portraits is the so-called cropping using a very shallow depth of field . For this purpose, large initial apertures are required, which is why portrait lenses in the small image area usually have initial apertures of 1: 2.8 or more; lenses with an initial aperture of 1: 1.2 are available here. With the aperture open, the face or the entire person can be optically separated from the background and, if necessary, the foreground. With a precise focus on the pupil (s), special emphasis can be placed on the eye area.

In the studio, a staged illumination of the person is part of the process to control shadow formation. As a rule, softboxes are used as light sources. Various approaches to light control are used in artistic portrait photography.

At the beginning of photography one was technically only able to depict people completely. In the course of time, the distance between the lens (camera) and the person being portrayed was steadily shortened, so that the face and / or facial features increasingly came to the fore. The images were described as follows: the visible part of the person being portrayed and the viewing direction defined from the point of view of the viewer. The following examples come from the portrait collection of the Humboldt University .

Examples of the portrait technique of people

Examples of the portrait technique of animals

Portrait photography was of great importance for early photography. The main problem of long exposure times was solved by using special fixing and holding devices such as Saronny's universal head holder . However, a great deal of patience was still required in the portrayal.

The motif often formed the basis of progress in photography. The first motif after the disclosure of Louis Daguerre's patent was from 1840 the depiction of people as a continuation of portraiture . The image design was retained for the next three decades. Many of those who invested in a camera were portrait and miniature painters . The technical development of the camera technology and the chemical processes for the development of the photographic material represented the progress. The first camera lenses made it possible to take pictures of standing people.

Photography experienced a huge surge in popularity in the late 1850s to the early 1860s. The French photographer André Adolphe-Eugène Disdéri can be named as responsible for this. He was of the opinion that a photographic portrait was unattainably expensive for many people. His idea to change this is based on the development of a smaller format than previously used (approx. 6 × 9 cm), called the carte de visite and patented it in 1854. The challenge then consisted of technical implementation, increasing productivity and reducing costs. After he succeeded in doing this, many photographic studios adopted the Carte de visite or the visit format in their offer. In May 1859 Disdéri had Emperor Napoleon III. and be able to portray his wife . This event also contributed to the popularity, as it was not customary for personalities to be shown on such small formats. Portrait photography thus contributed to the democratization of society.

Portraits were made in studios until the 1880s. The photographers Hugo Erfurth and Rudolf Dührkoop were among the first Germans to leave their studio for portraits in order to take pictures.

Basically, portrait photographs reflect a zeitgeist or a contemporary aesthetic.

A variant of applied portrait photography can be found in criminology , where such images are produced in anthropometry and for the production of wanted posters and passport photos . With the prints of the photos of homeless people from the years 1852-1853 by the Bernese photographer Carl Durheim , the world's first wanted book was created.

In nude photography , there is overlap for portrait photography, when the face is an essential pixel.

In the German Reich there was a draft law for the first time in 1902, which granted a “ right to one's own image ”; see also image rights .