The judgment of Paris is a famous episode in Greek mythology . The young man Paris has to judge which of three goddesses is the most beautiful: Aphrodite , Athena or Hera .

In Homer the subject is alluded to, in comedy and satire it is treated more broadly.

The judgment of Paris on an Attic black-figure hydria by the Antimenes painter , around 510 BC. Chr., State Collections of Antiquities, Munich

All gods are invited to the wedding of Peleus and Thetis , with the exception of Eris , the "goddess of discord ". So offended, she throws a golden apple from the door with the inscription καλλίστῃ ( Greek , for example "The most beautiful", "For the most beautiful") under the celebrating gods of the Greek Olympus . Thereupon there is a dispute between Aphrodite, Athene and Hera, who deserves this apple (hence also apple of contention / Erisapfel).

Zeus as the highest Olympian pulls out of the affair and places the judgment in the hands of a mortal: He appoints the innocent youth Paris , the beautiful, albeit outcast, son of the Trojan king Priam and Hecabe as arbitrator. Hermes , the messenger of the gods , is commissioned to bring the goddesses to the king's son, who has been living as a shepherd without being recognized since he was rejected.

In order to win the prince over, each of the goddesses tries to bribe him and offers him a price. Hera promises him rule over the world, Athena promises wisdom, Aphrodite, on the other hand, offers Paris the love of the most beautiful woman in the world. With this reward, Aphrodite can decide the verdict for herself.

However, the most beautiful mortal, Helena , was already married to Menelaus , the mighty king of Sparta . The robbery of Helena , necessary to fulfill the divine promise, is said to have triggered the Trojan War .

The Paris judgment in art

The judgment of Paris was already a frequently depicted theme in Greek vase painting . This subject can also be found among the Etruscans on bronze mirrors and in painting. In post-antique times and in a historical context in which the representation of nudity was frowned upon, the subject remained popular for paintings and sculptures. Finally, it offered the opportunity to depict three naked women in different poses, while the mythological and moral background of the scene saved the painters from being accused of profanity. The painters could look for the tension of the picture in the different phases of the preparation and, like Peter Paul Rubens, place it in the relational looks of the judgment. With Paul Cézanne the verdict has been reached, one goddess is losing her face, the other is already turning away.

The judgment of Paris, mosaic in Kos town 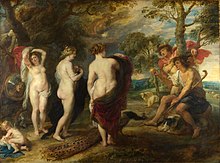 Marcantonio Raimondi : The judgment of Paris , around 1515/16, copper engraving after a lost picture by Raphael 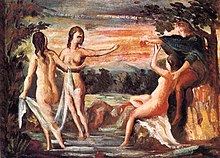 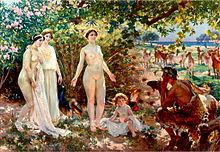 Enrique Simonet : The Judgment of Paris , around 1904, Museo de Málaga

The plot was also reflected in literature and theater, for example in a Nuremberg carnival game from the 15th century.